A: This is a fantastic question because in both coding and billing world, you’re going to need to know what is an ABN. The ABN stands for Advanced Beneficiary Notice. This deals with Medicare. It’s a Medicare waiver, actually, and nobody’s going to say Advanced Beneficiary Notice, they’re just going to say ABN. The only people that have to deal with this are Medicare patients, but I got several little points here about ABN and who and why they use them.

It’s a written notice from Medicare. It’s on a government form. Everybody uses the same form. It’s called a CMS-R-131 form. Because it’s a standard form which looks the same, that if you have someone fill it out for you, once you’ve had one person fill it out for you, it’s really easy to explain.

What it tells the patient is that Medicare may deny payment for specific procedure or treatment and that you will personally be responsible for full payment if Medicare denies the payment. That’s why it’s called an Advanced Beneficiary Notice. They’re saying, “In advance, we want you to be aware that Medicare may not pay for this, and if they do not pay for it, then you will be responsible for the payment.” That allows you to decide if you want to accept or refuse the ABN.

What is an ABN? | Medical Coding and Billing – Video 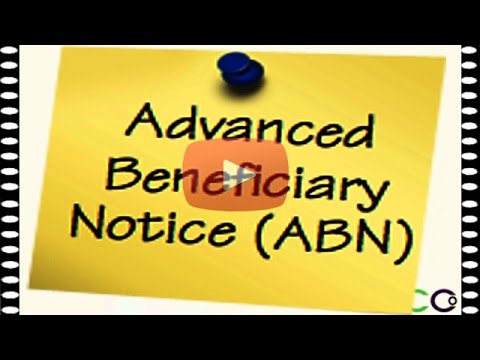 Some people want to know: “How come I keep getting these ABNs, and I have to keep signing them?” Well, that’s because Medicare only allows certain things to be paid for certain amount of times. The way they put it here: Certain items or services that are covered by Medicare are only covered up to a certain number of times within a specified amount of times. Examples of these are “frequency limited” services include laboratory tests, some preventative screening tests, and vaccinations. If you receive an ABN that gives a frequency limit as its reason, it means that Medicare will not pay if you exceed that limit on the service.

This came up as a question that I’ve heard before: “Do ABNs mean that Medicare is reducing coverage?” It does not mean that they’re reducing their coverage. It’s only if and when Medicare does deny a claim do you become liable for paying it personally for the service or the item. If Medicare decides to pay the claim, you’ve lost nothing by signing the ABN, and that’s important to know and let your patients know.

Again, it’s just for them to know that if Medicare isn’t going to pay something, then they in fact would be the one that is responsible for paying and often they have a secondary insurance coverage that picks up the balance. But if they’re ever in question, they can go to the website www.medicare.gov and that gives a full explanation of ABN. You can go into the search site there and put in ABN, and it will give information about that. And I would encourage you to have your patients go there and look that up if they ever question what an ABN is or if you ever question what an ABN is, but you need to know what one is and in fact it’s probably going to be a test question. It would be nice that you know what that is.

Learn More about What is an ABN?