This one threw me, because it says, “Photo of EVAR,” and I wasn’t sure what they were talking about. Laureen looked at that and said, “I don’t know.” She was thinking the same thing I was, but when I went and looked at the question, then I remembered. What it says — this was a pretty cool one. This one actually came in from a student, and I’ll end up clicking on this link as well.

She said, “I end up searching online,” and she ended up downloading this article, and here’s the link, but before we go to the link, let’s scroll down. I want to show you these pictures and I want to go over some of the words that I did first.

What an EVAR is is actually a repair. An aneurysm repair, and this is an abdominal aneurysm here. This is the stent graft that they put in right there. This shows you outside the kidneys where this is. This is showing you what the aneurysm would look like before the repair, and then they put the repair in there and it looks like with all these ziggy lines.

What is EVAR or Endovascular Aneurysm Medical Coding – Video 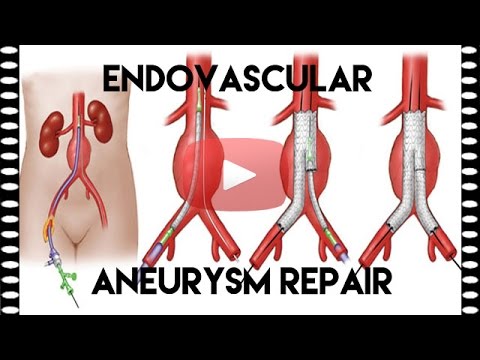 This is showing you how they would go in and do this, this middle picture, and how they would go in through the femoral artery to do that and put the repair in. Here is actually a live shot of them doing that in the OR, pretty intense. There were some terms that you needed to know, and some of these you may know and some you may not know, but this first one — fenestration — is actually in the code book, so you needed to know this — a natural or surgically created opening in the surface, fenestration.

Aneurysm — you may or may not know what that is — an abnormal blood-filled bulge of a blood vessel and especially an artery resulting from weakening as from disease of the vessel wall. This other word, this endoprosthesis — an artificial device to replace a missing bodily part that is placed inside the body. That’s different. That’s not a word that we all know very well.

The codes that we’re going to look up for this procedure, this EVAR is going to be 34841 and 34845. It’s an endovascular repair of visceral aorta (e.g. aneurysm, pseudoaneurysm, dissection, penetrating ulcer….) by deployment of a fenestrated visceral aortic endograft and all associated radiological supervision and interpretation, including target zone angioplasty, when performed, including one visceral artery endoprosthesis (superior mesenteric, celiac, or renal artery).

This other code, 34845, endovascular repair, this almost reads exactly the same, but you get down here and it says, with a fenestrated visceral aortic endograft and concomitant unibody or modular infrarenal aortic endograft and all associated radiological supervision and interpretation, including target zone angioplasty, when performed, including one visceral artery endoprosthesis (superior mesenteric, celiac, or renal artery), and then again there’re additional codes to 34845, 34846, 34847, and you can look at those to compare what they add.

Now, this article… We know the terms and we know what they are, I’m going to go ahead and click on this article that Laureen brought up for us. And this shows actually a procedure — endovascular aneurysm repair using branch or fenestrated device – again, those terms that we didn’t know. Then, in detail, he talks about doing this. He gives all of these great pictures of them going in and performing this procedure, and then it gets really in-depth with these pictures, it’s amazing. And the student found this.

Another thing that I found that was truly amazing is he gives a series of photo showing the technique of fenestrated grafting. I didn’t know these, but this graft here that they’re showing the pictures of, these actually has little spurs on the inside of them when you’re reading the article, so it grabs the artery. It was just amazing. You’re thinking about how delicate the artery is itself, but it has little spurs that grabbed the artery tissue so that it doesn’t let go the stent.

Anyway, amazing, go in and look at that. That will be on the Replay Club that you guys will have access to, but you can put in endovascular aneurysm repair using branch or fenestrated device to see that. Amazing, amazing how they do that. EVAR is actually an endovascular repair of an artery.