Q: “Can you present something on Breast and Cancer areas, since treatment is now being focused on the unique or rare type the patient is felt to have?”

A: What I did is I did some research and in truth there is a lot of different types of breast cancer, so each one of these I also footnoted so our Replay Club members can use those footnotes and go directly to this website, which provided amazing information. So, let’s just do an overview quickly of some of these. The first one is: ductal carcinoma in situ (DCIS). When you’re looking at the documentation, that’s what you probably going to see is DCIS, at least most of the time because nobody wants to write out ductal carcinoma in situ. 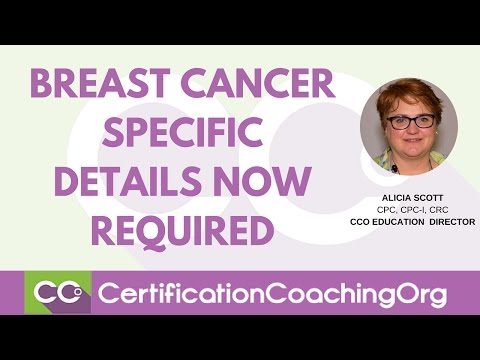 What you do need to know about this is that it starts inside the milk ducts. This is common breast cancer, so you’re going to see it often. But DCIS is known as a noninvasive breast cancer. It usually stays right there in the duct and doesn’t go treading to other parts of the breast. That’s the takeaway from DCIS, but do know that it does increase the risk of getting invasive breast cancer later on, so it’s not something that you want to take lightly
Going to the next one, we have several here:

About 80% of all people have this type of breast cancer. They provided this excellent image that I wanted to share with you. It actually shows you the parts of the breast. We don’t think of the breast being that complex, but actually it has a lot of parts. This will show you the ducts, the lobules (which we will be talking about), the areas that hold the milk for nursing. We have the anatomy, the nipple, fat, there’s major muscle there as well, then you’ve got the rib cage.

What they’re looking for is normal duct cells, we want them to not be enlarged or abnormal. What can happen though is that those ductal cancer cells can move and go through the basement membrane, and then there’s showing what the basement membrane is. Moving on, now that we got an idea of the anatomy,

The difference between this and the previous is that the cancer comes out like little tubes or tubules. That’s kind of interesting; I didn’t pull a picture of that one, but there are pictures of that that you can see. It’s a low-grade type of cancer. The problem with this one is that the cells sometimes look like normal cells for a long time and it grows very slowly, so you might not get identified of having IDC right away, then of tubular. This one was pretty fascinating:

The reason it’s called medullary, think of the medulla, you’ve heard people say their medulla oblongata? The medulla part of the brain it’s soft and spongy, that’s what this carcinoma looks like in the breast. Because it’s all soft and fleshy mass, it looks like the medulla in the brain, and so therefore they called it medullary carcinoma of the breast. I bet you won’t forget that one.

Then, this one was interesting too, not as fascinating as medullary,

Think of mucus, I know that’s not a very fun thing to think about. This type of carcinoma in the breast is it’s rare, it is invasive and it’s a ductal carcinoma again, but it actually kind of floats around. They say it floats around in mucin and it’s slippery and it’s like mucus going around. That wasn’t an interesting type. As we move on, as a coder we need to understand these different types, so it was a good question. 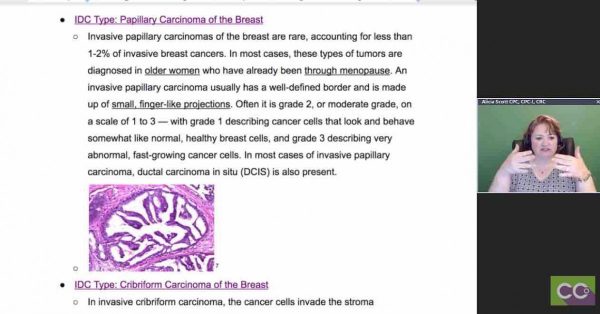 This one usually happens to older women after they’ve gone through menopause. What’s unique about this one is that it looks like little finger-like projections. I got this great image here, see how it’s like little fingers, it’s not that it’s encapsulated but you got that circle there and the little fibers or looks like fingers. That’s papillary. If you’re familiar with your medical terminology, papillary tends to be finger-like.

We have IDC Type: Cribriform Carcinoma of the Breast.

What it does is it makes like a nest-like formation between the ducts and the lobules. What made it pop for me is this, they said it sometimes looks like Swiss cheese. It is invasive. The cells, again, like some of these others, will look like normal cells and behave like normal cells and then they turn into carcinoma and start causing problems. Those are the IDC ones, invasive ductal carcinoma.

It’s just like it states, invasive. Cancers are invasive but when they distinguish or set aside that one is invasive in the description or the title that means it takes over. So, what was interesting about this one is that the ACS (America Cancer Society) it says that 180,000 women in the United States find out that they have this invasive lobular carcinoma.

Now, a big bad scary type of cancer of the breast is Inflammatory Breast Cancer. I would suggest if you want more information about this one that you go in and you Google some of the images. I was just talking to my mother-in- law, in fact, and my father-in- law has leukemia so they went in the cancer center and I had mentioned that I was working on this breast cancer report and she said, “Oh, I just feel so sorry for the people that have inflammatory breast cancer.” And I thought, “Oh! She knows what that’s called?”

It’s terrible because you get this reddening and swelling, but what’s unique about this is that sometimes it’s going to happen suddenly and then all of a sudden, think of after you had a baby, maybe sometimes women get mastitis. It might feel or look like that, and then it gets really bad really fast, and it’s one that requires a lot of treatment. However, they’re better at it, at taking care of this than they were like 10-20 years ago, and as you do your research you will find out more information about that.

The thing about cancers in situ (CIS) is that they’re encapsulated. One person who described cancers that were in situ, like being in a little jelly bean, a little hard shell that it doesn’t go out of that, and all the bad stuff is in the middle. This would be lobular, would be in the lobular part of the breast, cancer in situ (CIS), and it is again a type of breast cancer that some will say that it is not true breast cancer because you are thinking of breast cancer and it’s invasive or it moves around, and this stays in one little place, so think of like a little jelly bean caught in the breast.

But, the fact is, if you are diagnosed with this lobular CIS, you have a much higher chance of getting other types of breast cancer. I did want to make a note that “lobular neoplasia” that is sometimes what you will see it defined as, versus LCIS (lobular carcinoma in situ). So, as we code and we are looking at the documentation, know that if you see “lobular neoplasia” that’s what they are talking about.

Then we are getting into male breast cancer. I know that my students when I was teaching at the college were shocked when they found out that men can have breast cancer and there are specific codes for breast cancer for men. And quite frankly, the fact is that everybody has breast tissue. So if you have abnormal cells in any type of tissue, then it can turn into cancer, and so, men have the possibility of getting breast cancer but often they do not know what it is or they do not get it checked. That can be a problem.

Paget’s Disease of the Nipple

Now, I want to tell you about one that is really in the news a little bit more than it used to be. My mother had just read an article about it in fact, and asked me about it. Paget’s disease, it’s actually a cancer that starts on the nipple of the breast and looks almost like a little eczema and it can get worse and be irritated; might itch, might not itch; may itch sometimes and not other times.

The thing about Paget’s disease is the fact that if you have that, 97% of the people that have this actually also have a DCIS. So if that is something that you are dealing with or you’ve noticed or somebody says something about it, they definitely need to go have that checked. You might think it’s dry skin, but Paget’s disease is, again, in the press lately and it can be just scaly, red, itchy and irritated.

We’ve got some more. These are the biggies, though. This is the last one we are going to talk about. I went ahead and pulled pictures of this because quite honestly, I was not as familiar with this one as I was with the others; I knew about all the others. But this one is called Phyllodes Tumor. This one is actually a tumor that makes a leaf-like pattern and one of the things about it, the tumors are benign most of the time. Some are malignant and some are borderline. But for the most part, they’re benign.

But what do we know about benign neoplasms? They take up space, right? They cause problems. You can see by the pictures that we’ve provided here that it does not take long and it becomes an issue. So, again it grows very quickly. This is one of the best pictures that I was able to show you with different types. However, if you go into a Google image, that was really scary, this is one that you want to catch and treat very quickly. 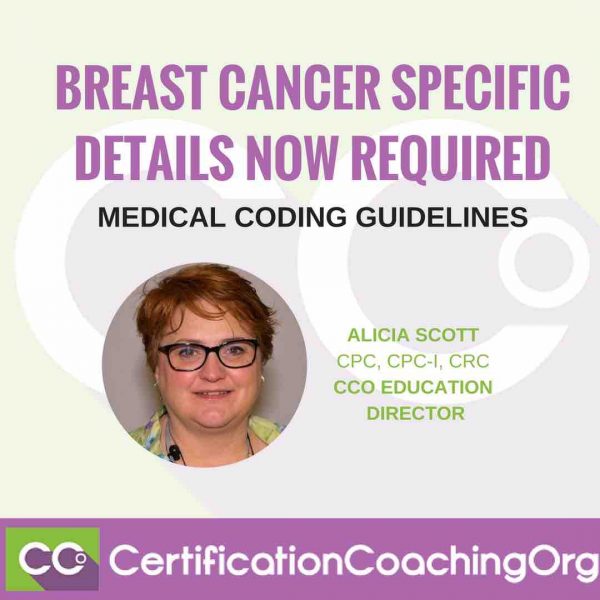