Q: Can someone have a metastatic tumor without having a primary cancer?

Now, what if they haven’t determined from all of the tests what the primary is, but they know that the cells that are in the breast are not breast cells? They know it came from someplace else but they haven’t determined where. What do you do? So that’s a metastatic breast. They know because they looked at the cells, Pathology tells them it’s still a secondary cancer. 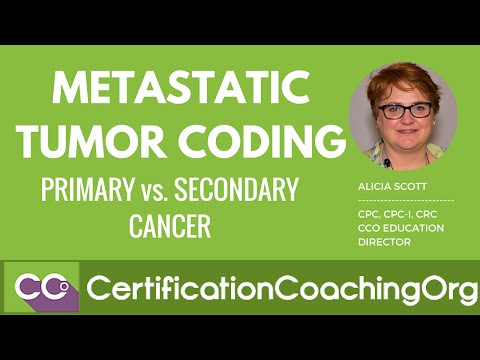 However, in some patients – this is underlined that’s why I want you to pay attention –a metastatic tumor is diagnosed but the primary tumor cannot be found, despite extensive tests. So, the pathologist knows that the diagnosed tumor, metastatic breast, is a secondary because of the organ or the tissue in which the tumor was found is not the same as the cells that are cancerous. That’s when you know to code it as a secondary. If I just saw documentation that said “metastatic breast” I would lean towards that being secondary.

Now, are you going to have more information? When you’re doing risk adjustment coding, most of the MA plans and stuff will allow you to look through the entire years’ worth of documentation to find out, only for cancer, a higher specificity. They don’t let you do that with other diagnoses.

But with cancer, when I worked for UHC, they did say that’s the only diagnosis that you can use other encounters to determine the encounter that you’re looking at what type of cancer or the highest specificity. Again, with risk adjustment rules changed; but when you have a diagnosis of metastatic cancer, I would start digging and snooping into the person’s chart and see if you can get to a higher specificity, but with just plain metastatic breast, I would say that’s secondary.