Alicia: This is a very good subject. I’ll try to rein myself in and not take too much time on this, but I found tons of information about epilepsy seizure coding.

Q: Can I get opinions on the correct diagnosis coding for seizure (in an epileptic patient)? If final diagnosis code is seizure, but the patient also has epilepsy, should you code to 780.39 or go to the 345.xx series of codes?

A: Well, I found an amazing study by this Dr. Barkley who is the Vice President of the National Association of Epilepsy Centers. He knew how to code, so that was obvious and that was very helpful when I wanted to explain this.

We’ll start at the beginning, seizure, if you code a seizure at 780.39, what are you looking at? You’re looking at paroxysmal behavioral spell generally caused by an excessive disorderly discharge of cortical nerve cells in the brain. So, epileptic seizures can be clinically undetectable (electrographic seizures) to convulsions. We’ll see the signs and symptoms can vary. They depend on, first, what part of the brain is being affected.

I could have pulled out all kinds of pictures of different type of things that they ask when a seizure happens where they have tonic-clonic seizures where you have lots of movement. My son has epilepsy and he has tonic-clonic seizures when he has one. Then, they have others that are just maybe a staring spell. The thing about that is sometimes people has seizure and you don’t even know because they mostly, they last less than one minute, right? Tonic-clonics don’t, they usually can last a little bit longer. But someone could have a seizure especially in children, you may not ever know it because it just may look like they’re looking out the window.

Going on down talking more about not signs and symptoms, let’s talk about epilepsy-345. That’s where we’re talking about actually epilepsy.

A syndrome of two or more unprovoked or recurrent seizures on more than one occasion – that’s how they determine that a person has epilepsy. So, you ultimately don’t have a reason to have a seizure; so if you have a seizure, one of the things they’re going to check is check to see if you have a fever because in children they’re usually febrile seizures, that’s what it was caused by. Or, they have an infection, do they have a UTI? Something like that. 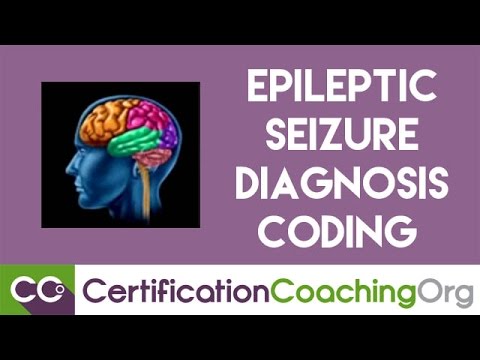 Is there something that could have caused the person to have the seizure and being sick? Another thing that they’ll check especially if you state that you have a headache, they’ll do a spinal tap and make sure that there’s nothing going on in there because you definitely don’t want to have meningitis or something that would cause a seizure.

Characterization – Behavior during the seizure(s) – how your body reacts tells them a lot about whether what type of the seizure it was and if it is possibly epilepsy. The age of onset – for an example, children will have fevers but they’ll have seizures a lot of time when they go to sleep, like, when they’re sick. They get a really bad ear infection, they run a really high fever and they might have a seizure. If it was something that happened as a child, they don’t think much of it. Honestly, I don’t want to say it’s not scary but it’s not as much of a concern. Even if they have more than one, if they can link it to a fever or an infection or reason, they have no reason to link it, that’s when it turns into epilepsy. So, the age of onset – did it happen as an adult, did you have it as a child?

My son that has epilepsy, actually as soon as he was born he had seizures; and then he had seizure again later when he was two but he had fevers. Then, he didn’t have fevers and he was having them, and that’s when they diagnosed him with epilepsy. So, the etiology is very important when determining if it’s epilepsy, which would be 345, and they can also use EEG readings to determine if it’s epilepsy because they can tell what’s going on in the brain.

Now, for example, that always is a help because my son who was diagnosed with epilepsy, so he has seizures for no reason, but he also has beautiful EEGs and he has a beautiful MRI. Just so you know the neurosurgeon told my son that, he has a beautiful brain, so that’s nice to know. But, they have to put all of this information together to determine if you’re a 345.

The treatment resistant, refractory – so they can go in medically, surgically and do something to stop having seizures. Poorly controlled – think of it like diabetes, an uncontrolled diabetic means that whatever they do and the insulin and the diet, they exercise and everything, they can’t seem to get it in control. Same thing here, they have breakthrough seizures which means they go a long time without having seizures then all of a sudden, for no reason they have another one. Or, you’ll also hear it called exacerbation of seizures.

Exciting stuff, but the terminology gets a little confusing because it kind of interplays with each other. So, let’s talk about 345.X1 – because we have to have documentation to determine what that is going to be right after the decimal – recurrent seizures. What happens there is a patient with epilepsy who was controlled and has had a return seizure or rate of seizures has increased.

Again, I can use my son as an example, he went from being a newborn until he was two before he had a seizure again and they were able to say that was a febrile seizure, the first one that he had. But then, he would go another whole year and not have any seizures when he got a little bit older and then he would have one out of the blue. That would be a recurrent seizure. You go a long period of time, everything is great, and then you have one. That could even mean if you’re on medication. Again, that’s what my son will do, he will go a long period of time but ultimately now because he usually outgrows his meds or something.

Breakthrough seizure – epilepsy patient, who has NOT had a seizure for a long time, then has one, or it’s a synonym for recurrent seizures. Keep that in mind.

780.30 Repetitive Seizures – You’re having several seizures in a short period of time. Repetitive seizures they usually know something is going on, it’s not controlled. In patient with a history of epilepsy – they’re not saying they have epilepsy anymore. The common causes are usually something symptomatic that caused a derangement of the central nervous system. That could be an acute stroke and they have a seizure. They have a head injury and they have a seizure. Or, things like withdrawal, acute alcohol withdrawal that causes seizures.

A patient with epilepsy, you’re going to code 345.X1. That’s the code that you would have used that the person talked about at the beginning. Your person with epilepsy and they haven’t had a seizure for a long time, but then they have one, it would be 345.X1.

Non-Epileptic Seizures – Those do happen. Paroxysmal behavioral spells that resembles epileptic seizures, that happens. Again, you think it’s a seizure but it’s actually not. The only way you may be able to find out is, they said you could do video monitoring of EEG to determine whether it was actually epileptic seizure or a non- epileptic seizure.

The causes for those, is it could be a cardiac reason. People could say they have dysrrhythmias. What about their endocrine system? You have a person that gets hypoglycemic, definitely it’s likely that they could have a seizure. And sleep disorders, if a person has sleep apnea, they can have seizures. They’re not epileptic but their body is… no sleep, it screws with your brain, and you’re going to have a seizure. And people who have REM sleep behavior disorders, they have been known to have seizures, it’s common for them.

Again, when you put this all together, if you have a patient that is epileptic and then they have a seizure, the proper code is going to be one of those 300 codes, 345.X1, because they’ve probably not had a seizure for a long time and then they have one, like, a recurrent seizure.

There’s a couple more there, I forgot: Neurologic – tics, myoclonus, frontotemporal dementia. It can look like epilepsy. Psychologic – panic attacks, autistic behaviors. My son is epileptic but he’s also autistic; so there you have to really pay attention to sometimes since we know what seizures look like that when people are autistic some of them will stare or have movements that are repetitive. In a person that wasn’t autistic, it would not be normal; so therefore, it could be a seizure, but with them it would not show up.

Acute Symptomatic Seizures vs. Late Onset Epilepsy: Early Seizure – after acute brain derangement (like, having a stroke or something), are symptomatic of a disturbance in brain function (something happened in the brain, maybe they had a brain injury or maybe they have a tumor. I’m not saying that’s a possibility, don’t think if you have a seizure you’ve got a tumor), does not predict development of epilepsy in the future.

So, if you have early seizures or one of these, it’s just an acute symptomatic seizure. That doesn’t mean that you’ve got epilepsy or you’re going to get epilepsy.

Seizure later – Beginning weeks to years later after something happened. They represent a development of epilepsy as a late effect. The code that you’re looking there, there are three main codes that he suggested which are common, which are: 907.0 – late effects of injuries to the nervous system, that would cause a seizure; 438.9 – unspecified late effects of cerebrovascular disease, you can have epilepsy; 139.0 – late effects of viral encephalitis, you could get late-onset epilepsy.

So, the seizure for later, those things, yeah, could possibly turn into epilepsy. But early seizures, those top three, not; just because you had them, you’re not going to have epilepsy per se.

That sums it up. It really is amazing and it’s real easy to get those terms confused; but if you do a little study and a little research and make notes in the tabular of your manual,that will help you as well around those codes.