Alicia: Cushing syndrome, the code for that is 255.0 and the question was –

Q: I encountered this question in one of the online exams that I purchased. I’m confused, because I believe that in neoplasm you need to code primary cancer in the second position and secondary cancer in the first position which is true by the most part, but this is a little bit different. This is actually considered late effect and the rules for late effect are a little bit different than coding for primary and secondary cancer. The question actually stated, “Cushing Syndrome due to” – that’s our keywords – “malignant pheochromocytoma.

A: She was stating that the correct answer was C which the 194 – if we scroll down a little bit, it will tell us that’s the malignancy. Then, 255.0 is the Cushing’s syndrome. She’s confused about sequencing. This is really a great example. What you have to think about is what story are you trying to convey to the payer when you’re doing this coding? And you’re stating that patient had a malignancy and this is a malignancy where the cancer is on the adrenal gland which is above your kidney and it caused Cushing’s.That’s the late effect. 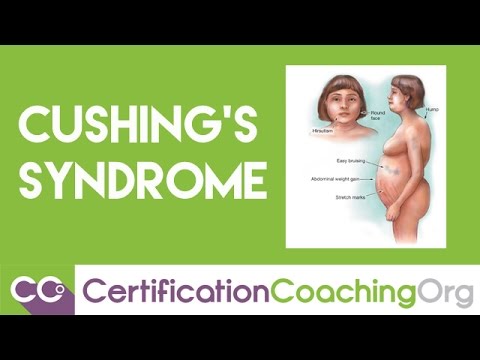 I gave a little bit of a description about how that happens or what that does to affect it. Those glands are on top of the kidney, it’s not very common; but if you get a tumor or a problem with those adrenal glands it will mess up every tissue in your entire body. The two codes again that we’re dealing with is 194.0 and it’s a malignant neoplasm of the adrenal gland and as a result of that cancer, then they develop Cushing syndrome.

There was note with the code that I pulled out and it said, “All neoplasms whether functionally active or not, are classified in Chapter 2. Codes in Chapter 3…” and it gave this list “…may be used to identify such functional activity associated with any neoplasm, or ectopic endocrine tissue.” That note was actually there with the Cushing’s code. They’re telling you, “We know that these two codes are associated with each other.”

Real quick, what Cushing’s does is it’s just a hormonal disorder. When you have that hormone in the body tissues, then you develop – that’s that real round face and they get real heavy on the top and the upper body and then their legs and arms get kind of spindly. One of the main things is it causes a lot of hypertension, but it also really messes with blood sugars as well, the endocrine system and on the glands.

Ultimately, what has to be done is they’ve got to go out and take that malignancy or the tumor or anything that’s happening to the adrenal gland to alleviate the problem. Once they do that, then the Cushing’s would go away. Again, it’s not something that’s very common to have a tumor in the adrenal gland, but when it does happen one of the likely things to develop is Cushing’s.

Again, sequencing, the malignancy does go first in this scenario, because what happened first? It’s not what they’re being seen for that day perse. The statement was that this person had Cushing’s disease due to a malignancy. When you’re telling the story, the patient had a malignancy on the adrenal gland – the cancer – and as a result they develop Cushing’s. That’s why C – 194.0 and 255.0 – is an acceptable sequencing for that diagnostic statement. That’s it guys. It’s an exciting and good question to come in.

Boyd: Excellent. Next up, I think we’ve got Laureen.

Get More Details About Cushing’s Syndrome