Alicia: Cardiac Diagnosis Codes – These are I love, diagnosis codes, as many of you already know. But, cardiac diagnosis codes can be a lot of fun. There’s some that you should probably just make note of especially if you’re working with maybe Medicare patients or patients more likely to have cardiac issues. The ones that I pulled out this time were 414.00, 414.01, 443.9 and 429.2 and 412. These are ones that you could see quite a bit and we’ve even created a little poll after I talked about to see if you catch the nuances of these codes.

Common cardiac codes that you should just be familiar with. The first one, 414.00, coronary atherosclerosis – this is CAD. If you’re not familiar with the abbreviation, when someone says they have CAD, that’s what it is. But, what makes this CAD different is this is the one you use after a person’s already had a CABG. That means they’ve had a bypass graft put in.

So, think, if somebody’s had a CABG, if it’s in the medical history or in the chart, then you’re going to use 414.00. But, if a person has CAD and they’ve not had a CABG done before, it’s going to be (.01). If they’ve had a CABG use (.00), think the two zeroes look like two heads of cabbage, two round circles there. If they’ve not had a CABG, look, it doesn’t look like two zeroes, it’s (.01) so no CABG was done. That’s again, coronary atherosclerosis and it is CAD.

Another common code is 443.9, peripheral vascular disease, unspecified. They’re just saying the person has PVD. A lot of times, it will be written PVD especially in handwritten notes. But they’ll say, “person has PVD.” Also, intermittent claudication; you’ll see that a lot of times in the reports. I’ve never really seen documented spasms of the artery, but that obviously falls into this because it’s listed. 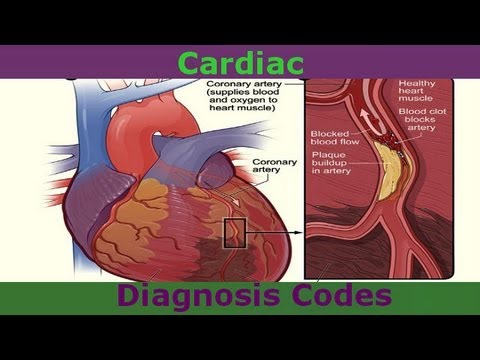 443.9, if the person has PVD, they have it for life. So, as far as with HCC coding, if I have a patient that has 443.9 and they’re on a medication for that. Or, he checks the peripheral pulses – you know how you see him pinch their fingers in their nail bed to see how long it takes for the color to come back, stuff like that. Anything that he does to check the peripheral vascular system, it concurs or gives you additional documentation the person has 443.9, peripheral vascular disease. It’s something that you see pretty often. Again, if they’ve had it in the past, that means they’re stuck on it.

In red here, when you look at that code, that excludes atherosclerosis of the arteries of the extremities. That’s a little bit different.

Make a note here; see this “use additional code”? Remember when before we saw the code first, that’s a guideline you want to pay attention to. “Use additional code” – that means, there’s going to be probably another code after 429.2. If there is the presence of arteriosclerosis, then you’re going to code that in addition and put it behind 429.2.

412 – One that gets people sometimes is 412. This is a code that carries an HCC. It really does establish the level of disease in a patient, but it’s old myocardial infarction. Now, I think it’s kind of funny when it says “healed myocardial infarction” because you can’t heal an MI. When a heart tissue dies, it dies. You can see a past MI on an EKG. I know a lot of people may not have known that, but even like my mother-in-law went in and had an EKG here not too long ago, they said, “Oh, by the way, when did you have a heart attack?” She said, “I’ve never had heart attack.” “We’re showing an old MI here on your EKG.”

So, they can tell that there’s been death of heart tissue at some point whether mild or severe by an EKG. That’s another reason why when a person comes in with chest pain in the ER, one of the first things they do is they slap that EKG monitor on you because they want to know if you’re having a heart attack of if you’ve had heart attack in the past.

Another thing: Report diagnostic evidence of an old MI which is not causing troublesome symptoms at the present. So, if a person comes in and they’ve got a cough and they’re being seen for that, but they’re not having problems with their heart but they had a heart attack last year, then you’re going to report 412. It’s kind of like a diabetes thing. Once you’ve had it, it’s going to follow you.

We’ve got a little poll. Here’s the information that Laureen was nice enough to put on there. It says: the date of service is 8/15/2013. The patient is seen by cardiologist today in follow up. Mr. Smith was discharged from Feel Good Hospital on 8/1/13 after a stress test resulted in an MI. Patient is doing much better considering the rough time he had in 2001 after his CABG. His CAD has not improved and has new diagnosis of PVD.

Poll – Which code cannot be used in this case? Now, we can launch the poll. Which one of those three codes do you think they cannot use in that case?

Alicia: Just take a guess. Now, you can put in the chat too for those iPad users.

Laureen: Yes. The way the webinar works is we answer questions that were previously submitted. We try to answer as many on the fly as we can, but we need time to research questions. So, go to CodingCertification.Org/forum if you have a question you want us to answer, it’s the best place to put it. We pick questions out of there for this webinar. Also, there’re many coders that monitor that forum and will answer questions, you get this lively discussions.

Alicia: Yup! Because I thought some of you might do the PVD. The PVD once you got it, you got a new diagnosis, you got it. But the CABG, you’re right; some of you were thinking the CABG. But it says he had a CABG last year and he didn’t have a good time with it. That’s documentation you can use to get the correct code. I love doing things like that.

Laureen: Hey, Alicia, can you take a minute to explain briefly HCC coding? You’ve mentioned it a couple of times and a lot of people were like, what is that? They’re freaking out, “Oh my god, it’s another coding I need to know.”

Alicia: The HCC coding is really gaining grounds and it’s a way for payers to project how much money they need to set aside for a patient, for the future. These codes like 412 carry an HCC and it’s an additional code that I guess you could say carries weight. So, if a person is a diabetic, he’s a type 2 diabetic, he would have an HCC of 19. If he’s had a heart attack, a 412, then you get to add – I’m trying to remember what 412 is, I think it’s an 88. But, there’re regular HCCs and there are RxHCC.

But with those numbers they can project how much money they need to set aside for the patient next year. If you have a person that is on – only got it with Medicare patients right now, but it’s going to be across the board as we’re moving away from CPT to do reimbursement and getting into diagnostic reimbursement.

Let me look, a person has a… [static audio – 1:15:21] and he had a heart attack a year ago and he has PVD. That’s three really heavy weighted HCCs that tell that payer, “OK. We need to set aside x amount of money for the patient’s next year’s care so we don’t run out and we have enough money to take care of it.” Now, if you have a person that has [static audio] and he has neuropathy and he’s already had an amputation, then because of those HCCs how much money they need to set aside for that person. Then, you have another that has COPD, but that’s it. Nothing else is wrong. They know exactly how much they need to set aside for that patient. Then, they see some patients that two years has some things wrong with them but nothing carries an HCC. Something that’s not a chronic condition, that’s what the HCC stands for. The high deal [?inaudible] of chronic conditions and a lot of fun to do. I’ve been doing it for awhile now and it’s fascinating and especially like ICD-9 coding, that’s all you deal with, this ICD-9 coding. It’s something that you’re going to see more and more, and hopefully we can get some more things on, or talk about it more in the future.

I just pulled up, I know we did this before: What is HCC Coding? So, I put it in the chat.

A little shortcut that I keep showing, but it bears repeating. If you go to Google and you type in your keyword first and then you do site colon and you could do AAPC.com, CodingCertification.Org, it will find anything on that site with that information. So, if you know we’ve discussed it before and you want to see if we have a video clip of it, or if we’re discussing it on the forum, this is a great way to do it. That’s how I find a lot of stuff, I go, “I know we did that, let me go check.” Just site, colon, and then CodingCertification.Org. You need the colon touching the URL, okay? We’ve actually talked about this quite a bit, so here you go. That works for anything, not just our site.