Alicia: Now, this is a very fun section. I have to tell you I really like cardiac and I really like anatomy. I like terminology and I like the physiology of the disease process and stuff.

There have been several requests coming in for some help with cardiac coding and I think that it’s not as hard as some people think it is, once you get in and start doing it. Yes, there are maybe some complex guidelines but they’re not that hard. I don’t even want to say they’re complex, they’re not; it’s just that they are detailed so you have to know the terminology. And if you know the terminology and you understand the anatomy, it’s not bad at all. There’s people who are cardiac coders that thinks it’s not hard because it’s what they do every day; however, somebody just stepping in, they struggle.

What I decided to do is give you some basics of cardiac knowledge that you need to start with. If you get this stuff down, then it’s going to make cardiology coding a lot easier. Again, this is basic and then you can get into advanced; but it is a lot of information so I had to divide it up into two slides.

If you had biology or anatomy in high school or maybe college you may know some of this basic stuff, but you need to expand on it just a little bit more as a coder.

What is the 1st step in Cardiology Coding? You need to know your anatomy of the heart. One of the things that is so impressive about the heart is that it’s considered one of the strongest organs of the body and it’s made up of involuntary muscle. If you studied the structure of muscles and muscle tissues, there are different types. There is cardiac muscle, there is striated muscle, smooth muscle and all this other stuff; and there’s voluntary and involuntary muscle. 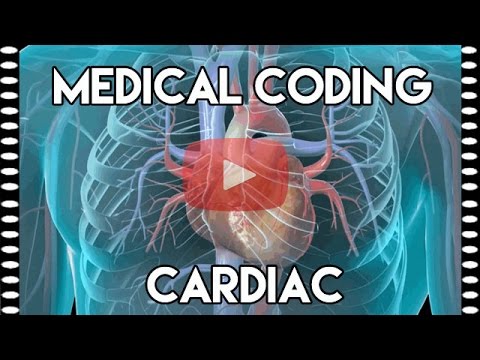 Let’s talk a little more in-depth: Systemic circulation – delivers blood to all body cells and carries the waste away. Simple as that, that’s what it does. Pulmonary circulation – eliminates carbon dioxide and oxygenates the blood through the lungs. When we exhale, the carbon dioxide goes away. You inhale and your lungs oxygenate the blood and it goes the same way again and again. Plants like carbon dioxide so it’s good to talk to your plants, and plants release oxygen so it’s also good to talk to your plants. You’re not weird if you do that.

Let’s talk about the heart a little bit more here, the basic structure of the inside of the heart. You know how there’re always exceptions in the American English language and they’ll say: ’i’ before ‘e’ except after ‘c’ and the exception of, like ‘received’ and some of those others. That’s the case with the heart. Arteries carry oxygenated blood, veins carry deoxygenated blood, except in this one artery called the pulmonary artery. And this one vein called the pulmonary vein.

Let’s talk about the structure. The superior (means above) vena cava brings blood, deoxygenated blood from the upper half of the body into the heart. And then down here, the inferior (below) vena cava brings the deoxygenated blood from the lower part of the body into the heart. What it does is it goes into the right atrium. There are four chambers in a human heart.

When the right atrium fills up, it whooshes through the tricuspid valve, and that tricuspid valve make sure that the blood once it gets in the right ventricular cavity doesn’t go whooshing back up into the atrium, because that would be bad if it regurgitates back up there. So, once the right atrium [Ed. Note: ventricle (Alicia meant to say “ventricle”] fills up, it gets completely full, it whooshes up the pulmonary artery. The pulmonary artery is shaped like a “T” because it’s going to – my husband was a plumber for a long time, so a T-fitting was literally like that – it whooshes up and it goes out to each side of the chest to the right and left lungs. Even this is an artery it is the only artery that carries deoxygenated blood.

The aorta got three exit points here; these exit points are really cool. You always recognize the aorta because it’s got those three little tubes, look like a bagpipe thing. But this one over here on the left goes out to the left side of the body, this one goes up into the head, and the other goes out to the other side of the body. And then whooshes on down, and then the whole process starts again.

Next, this is more detailed but it’s important to know the outside of the heart, because when a person has cardiac issues like a heart attack and stuff like that, that’s affecting this outside vessels. Now, you don’t have to know all of these, again you’ve got your aorta and all of these little bagpipe parts that I like to call bagpipe parts, they have names and stuff. You don’t necessarily need to know that.

What you do need to know is, this is the apex of the heart, that little V shape. You need to understand these veins. You do not have to have these veins memorized. You can’t,

there’s too many of them. But, if you’re going to have to code for bypasses and stuff like that, these are the veins and arteries they’re talking about and the ones they’re going to bypass. So when you hear them say, “Well I had a four-way bypass.” That means they took four of these veins and bypassed them with other veins or arteries that they pulled from someplace else in the body, usually the leg.

This is the outside of the heart. And again most of these, these terms, not necessarily you have to have memorized. But I would know that this is the apex of the heart and those veins all around the apex… when there’s death of tissue, there’s a blockage right here, then this tissue dies and that’s why they bypassed it with other veins. And cardiac tissue does not come back once it’s dead.

Here is the view, this is an anterior view, this is a posterior view, and it’s important to know both of them. These again, you do not have to have these memorized, but you need to be aware of them, like coronary sinus. OK? Middle cardiac vein, again, you do not have to have that memorized; but if you see that in documentation you’re going to think, “Oh, okay. I kind of remember. That’s up in the heart.” But I wanted you to see what this looks like because you want to be aware of this. That’s all for those slides.

But these memorize, these be aware of them. It would be great if you could label them, and there are things out there on Google that you can use to practice labeling them.