In 2010 I began my preparation to become a certified trainer in ICD-10-CM. The more I learned, the more excited I became. I envisioned my coding world as a place I could find enough codes to transmit to a payer, knowing the claim was coded properly with an accurate account of a patient’s encounter – I was eager to share the news with my staff, my clients, and CPC students. I visualized more and more claims getting paid because documentation and coding would be so precise. Coding had become fun and challenging. More importantly, providers would document so efficiently that there would be no question of ethical billing habits. Yes, ICD-10-CM was the answer to a coder’s prayer.

I admit however, as the October 1, 2013 date approached, I felt a little uneasy. I knew I was ready to move on, but I did not feel the overall response to ICD-10-CM was embraced 100%. In fact, I witnessed managers taking courses on the implementation of ICD-10, but they were not throwing themselves into the rhythm of practicing and growing familiar with code sets. They were dabbling with coding, but not clinching it.

When October 1, 2013 was postponed to October 1, 2014, I felt relief. I knew that software vendors were close to being ready for the change, and CPCs were growing in numbers with training. By October 1, 2014, we would be looking good. My own practice management software was already designed for the mapping of ICD-9-CM to ICD-10-CM. Instructors became busy coaching online and teaching classes to billers, coders, and physicians. Still, I felt uneasy about many (not all) providers’ lack of involvement. Smaller practices pushed off training for a long time but began to get involved as the 2014 date approached. However, they needed a lot more hours of education than what they had invested thus far. Providing accurate documentation was crucial. My concern was that providers still did not document sufficiently using current CPT and ICD-9-CM codes. They are getting there….slowly….but it has been a slow process.

Larger organizations have invested exorbitant amounts of money for implementation and training and will continue to promote documentation accuracy, and maintaining a flow of ongoing training until the new deadline of October 1, 2015 voted on by the Senate two days ago. Providers and coders who have been dragging their feet have been given a reprieve. Providers now have a chance to really familiarize themselves with their specialty and all that it entails. The key to success in ICD-10-CM is practice, practice, practice! There is a lot more to ICD-10-CM than ICD-9-CM, so you want to feel comfortable with your coding choices.

Not all of us in the industry are happy about another delay. We have been so busy preparing for the 2014 deadline and have invested countless hours and money to make the transition and now we sit and wonder….what next? The Centers of Medicare and Medicaid must now provide direction to the industry on how the delays will impact providers, vendors, clearinghouses and other parties.
But on a positive note, while you continue to practice your code sets and train for your proficiency exam, you now have time to look into the anatomy and physiology training associated with ICD-10-CM at www.. Why? Documentation is critical with ICD-10-CM, and as coders, it is imperative for you to understand how the human body functions for complete accuracy. So, keep on practicing your coding but if you have not learned how the anatomy and pathophysiology of the human body ties into accurate ICD-10-CM choices, now is the time to jump in and learn.

Get More Information about ICD-10-CM Delayed until October 1, 2015 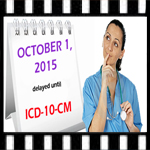