Alicia: Alright! Malignant Ascites Primary Site Unknown – This was kind of interesting because it wasn’t exactly…I think a lot of people don’t understand what ascites are.

Q: The question was, “I am having a disagreement with my fellow coder. It states under 789.51 that you are to code the primary and/or secondary malignancy first and it states 197.6 for the secondary malignant neoplasm of retro-peritoneum and peritoneum. So I think it’s 197.6 and 199.1? Please help.”

A: I kind of wrote this down. I like doing that.

Laureen: I’m looking on how to pronounce “ascites.”

Alicia: I think it’s funny, you know what, regional people do it differently too. I’ve always said ascites and let’s see what this site says. This is really neat, if we can hear. These tools you found. So, kind of do it?

Laureen: Because I’m on the phone, I can’t hear it.

Alicia: Oh, if you guys go to this website, and it’s howjsay.com, and you put in the word, it will pronounce it for you. But, let me tell you something that I’ve learned from sign language school, you never tell a medical professor, so don’t walk up to a doctor and if he pronounced it like Laureen does or he pronounced it like I do, never correct them. That is something you don’t do. Regionally, people pronounce things differently and you just usually pick up where it’s from.

Laureen: Was that a nice way of telling me off?

Alicia: 789.51 – When you look up this code, code first the malignancy such as the neoplasm of ovary. It gives you this suggestion. So, that tells you, you want to always pay attention to these guidelines. This is how the AAPC when they form the test, they know you know how to look up a code. What they want to know is can you follow these rules and these guidelines? That’s what they’re testing you on. So, if you see a code first, that means there better be a code in front of 789.51 or you’re going to code it wrong. 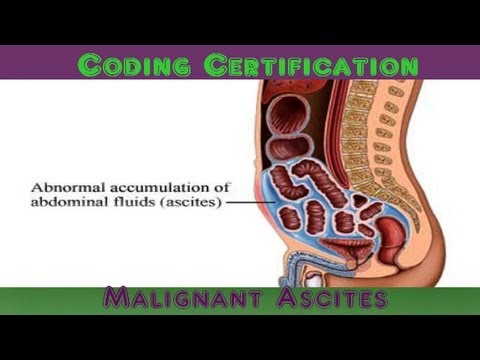 Real quick a little bit of information about what this is. “A malignant ascites is the abnormal accumulation of fluid containing cancer cells in the peritoneal cavity” – in other words, they’re just filling up the abdominal cavity more or less with fluid. “This kind of ascites can be dues to the metastatic spread of a malignancy into the peritoneal cavity, but it may also be due to a primary malignancy elsewhere, such as the ovary.  This usually denotes a late stage of cancer. The most common symptoms are distended abdomen with pain, loss of appetite, shortness of breath, low blood pressure, weakness, and fatigue. Fluid is sampled by paracentesis (they just go in and draw some fluid out) and may be drained or chemotherapy may be injected and diuretic medications given,” – because your body can actually absorb this fluid.

Later in this, I’ve got a picture of somebody that has that. But if as a coder all of these things, you may not know a lot about ascites, but when you’re coding, you need to know all of that stuff that can be a symptom of it because you usually have to draw a parallel lines. These are things you need to know about. The related malignancy should be coded first.

She had asked about 199.1. For anybody that’s new to coding, when you first start doing the ICD-9 and you get in the cancer codes, this is why I like to call as a default code. This is also part of the guidelines, if cancer is mentioned and you can have a primary and secondary cancer; if you don’t know what the primary and secondary cancer is, but you know there is one because it’s mentioned that the person had cancer 12 years ago and now has been diagnosed with lung cancer. It shows that it’s a secondary cancer…

you can use this primary, secondary either way.

In other words, somebody came in and said your patient had lung cancer 20 years ago, was treated and was in remission but was just diagnosed with cancer again. You don’t know what the secondary cancer is, so you would use 199.1; so it can be listed first or second. You use this code for malignant neoplasm of unspecified site both primary and secondary.

197.6 is the one that was mentioned in the question and that is the code for a secondary malignancy. Now, 197.6 in the description tell you it’s a secondary cancer. Some people would think, “Oh, then it is listed second.” No. It could be listed first if that’s the cancer that’s being treated. So, if your patient came in for the secondary cancer, 197.6, but you don’t know what the primary cancer is then you’re going to list 197.6 and 199.1 because you don’t know what the first one is. You always list first the cancer that’s being treated.

From what was being said in the question, I would have listed it 197.6, 199.1, 789.51 and that’s telling the payer that your patient came in and is being seen by the secondary cancer. I don’t know what the primary cancer is, and they have this malignant ascites. Now, if they’re being treated for the malignant ascites, then you could put that 700-code in front of there, but…

Laureen: We’re having trouble getting everything you’re saying, we’re getting a little static.

Alicia: Am I talking too fast?

Laureen: No, no. I think it might be your phone line. Try that once again, sorry.

If you scroll down, I have a picture of what it look like. This was an interesting note that I pulled off the website that I got this picture off of. Your bellybutton does necessarily stick out. Think about it, your abdomen literally filling up with fluid.

Malignancy accounts for around 15% of these causes of ascites like that and then it list a few of them. You can get those on the Replay Club or when you get the recording of this for everybody that was here. It was just an interesting thing. If anybody seen this, usually a really scrawny person and then got this giant belly like they’re twelve months pregnant.

Alicia: Then, just other diseases that will… disease processes can cause that. 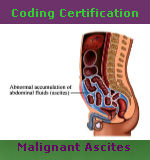