This nerve block follow up care, I had to call my friend Diana that went to Orlando with me just to confirm some information about this.

A: Now for one, in her background, she said she didn’t think this was done very often but that doesn’t mean, obviously, it [doesn’t happen] because someone wouldn’t be asking this question. For an answer, this is what information she had given me. She said, it all depends, and this is what you need to know. 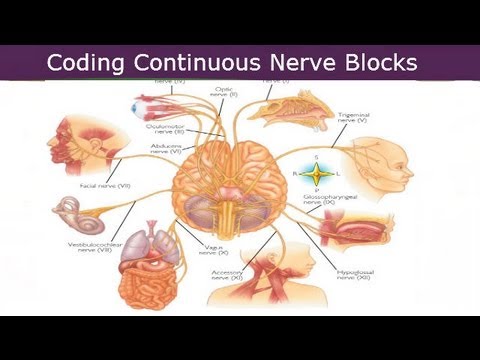 Let’s say someone had back surgery and they had spurs cut off of their spine and they more or less slit them from C1 to L5, and there’s a lot of pain involved; but they don’t necessarily need to be in the hospital, they just need pain control. So, they give him a pain pump and they send them home. That’s kind of what I’m thinking that this is.
Now, on that surgery if it’s a major surgery, there’s going to be a global period that goes along with that. Now, if it’s not a major surgery, and for whatever reason, it’s a pain control issue, maybe they have a little back pain and they’re trying this, that’s not going to have a global period with it. You need to know what was the procedure that was done to the patient that had them need this catheter to be placed and the pain to be taken care of.

Now, that being said, now that you’ve got that information, let’s say you do have a global period, you still need to check with the payer because if it’s in the global period, then you’re not going to get paid. Then, if you call the payer and they’re on Medicare, chances are Medicare doesn’t pay for telephone visits as far as I know. You can’t use it. What you would do is, you would just document that the anesthesiologist called and did a check on the patient and you can’t turn it in.

If you can turn it in, you still have to document it and you would use a telephone E/M and I think I have those listed at the bottom. I don’t know. I’m not sure. I think I did. No go up, go back up. I thought I listed them. Well, okay, it’s true. I gave a range. Go down just a little bit. There it is, 99441-99443, those are E/M codes for telephone services. You could use one of those, but definitely check with the payer because most likely they’re not going to pay for that. It still has to be documented. You aren’t going to document it with a code, you’re just going to document it.