Otitis Media vs Allergic Reaction – this one has been trying to get answered.

Alicia: Because it’s one of those simple ones and yet… I can tell you, you don’t talk about test questions. You’re not allowed to talk about test questions when you walk out. But I do recall a question about this on the exam. The person had said “My 3-year old is prone to ear infections. I work in an allergy office that she goes to regularly and I was looking at her chart to get dates of ear infections for her ENT appointment she had on Monday. Anyway… question is what is the difference between 381.01 Otitis Media Acute and Otitis Media Allergic? I noticed the documentation was fairly similar and (I can’t find the paper now) but two of the three times she was given an antibiotic, yet each time it had one of these two diagnoses. Also, the last visit the doctor/PA told me that she didn’t have an ear infection; that the ears were red, yet the diagnosis was Otitis Media Acute and no antibiotic.” 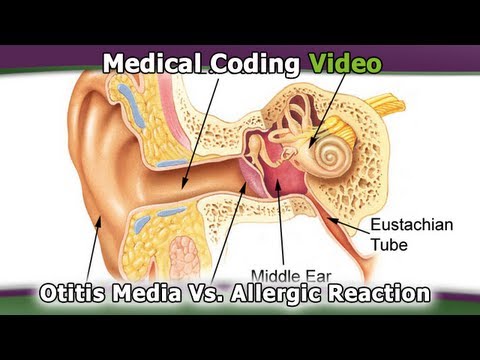 She’s ultimately confused about the details about otitis media and the adjectives that go along with it. So, what is otitis media? There is a link which I kind of copied the information here. There are three kinds of ear infections, which are called: 1) acute otitis media – acute means sudden onset, 2) otitis media with effusion, which means that there is pressure built up behind the ear, and 3) otitis externa which is swimmer’s ear, which I know some of you have heard that. That is just meaning that the ear canal is irritated.

Now, with all of those you can have some other things. One of the key words besides acute and chronic – and most of you will know what that is – but you have to pay attention to that, they are different codes. If I’m writing a test question, you bet I’m going to throw one of those in there because it lets me know if you’re paying attention to the details. You’ve got to pay attention to the adjectives. That’s what they’re wanting to know on the CPC exam. One word can make a lot of difference.

In acute serous otitis media, the infection of the middle ear is accompanied by a build-up of fluid, usually due to inflammation of the Eustachian tube preventing drainage. Scroll down to the ear real quick, Laureen, that we’ve got. Here you’ve got the ear canal. You’ve got the eardrum right there, that little pink circle there. Now, then, in the middle ear, that can have pressure. Fluid can build up in there and all that can have swelling and stuff. The eardrum will bulge ultimately. And if it’s bulging, then they know it’s with effusion. If you’d ever had a chance to see inside of the ear – and I advise you to go on YouTube and you can see all kinds of pictures.

But that’s how they would diagnose otitis media with effusion. Now, when they say serous, what they’re saying is, ultimately, is there any pus? Is there any drainage, serous fluid, that’s what that means. There’s something oozing out of your eardrum around the eardrum. So, they’ll look in the ear; if it is just irritated, the ear canal is just irritated- it’s inflamed, it’s itchy. Think of “itis” there’s irritation there. That is a lot of times due to an allergic reaction. It doesn’t have to be because it’s infected. If the eardrum is bulging, then you have effusion. If you have all three of those things and on top of that fluid coming out of the ear, that’s also when you would need an antibiotic. A lot of times, they will not give an antibiotic for just irritation, but they will give it for fluid, the bulging eardrum and they’ll give it for… Because a lot of times, your eardrum will go ahead and perforate and they don’t know what’s behind the eardrum. Is it pus, is it just pressure? What’s back there, they can’t see it. Your eardrum is actually kind of clear and if it’s white and foggy, they know there’s something back there.

Then, the build-up of the fluid… and the drainage. So, acute allergic serous otitis media – that means sudden onset. It was brought on because of an allergic reaction. There’s fluid or something coming out of the ear that’s made it inflamed, 381.04.

Now, your doctor may not write all of that. You may have to go in and see… he’ll write acute or chronic because that’s just a given. But he may not write allergic. If he doesn’t say allergic, you can’t say it’s allergic. If he indicates that it’s allergic reaction or the patient has allergies or something, then you can probably draw the line and use that 04. If it doesn’t say “due to an allergic reaction,” of any kind, you can’t use that code.

381.10 is a completely different scenario. Chronic – that means this has been going on for a long time, maybe they’ve had it either for a long time or they get them repeatedly. Serous – so you have fluid draining, there’s stuff coming out of the ear whether it’s pus or fluid or something. And inflammation – simple or unspecified. Now, this is probably one of the more common codes that are used specially with a child that keeps getting an ear infection. They don’t know. Have we just not been able to get it cleared up? We’ve got fluid, we’ve got inflammation and he didn’t say whether it’s simple or unspecified so this kind of – if there’s fluid, this is going to be a catch-all one.

Now, when you go in to 381… are you able to bring up that page or is that too much work to bring up the manual?
Laureen: Which one?

Laureen: I can do SuperCoder.

Alicia: OK, I’m not sure if it looks the same as the manual, but I bet it does.

Alicia: You want to just pay attention to those fine tune words, those adjectives.

There you go. Put in 381 and let it give the details of all of them. That’s what’s so great about this; you can… if you know where you’re at, it will give you. There are more than just those ones I mentioned. See? You’ve got acute nonsuppurative – that means there’s no fluid, there’s nothing coming out of the ear. There’s no pus, there’s no drainage. Then, it’s zero. One – Chronic and there’s fluid. Mucoid is just another word for mucus. Other and unspecified – nothing coming out of the ear. Now, all of these are going to use another digit, mind you.

But, see all of your options there? You have to be very careful, and this is one that you’ll often see on test questions especially mock ones because it’s so easy to trick somebody at. They say, “Ops, otitis media. Okay, 381.01, got it!” and not paying attention to the details. I keep saying that, it will get you on the test. Pay attention to details. Don’t go too fast.
This is where you want to bubble and highlight. Right, Laureen?

Laureen: Yup! Although I tend to do that on my CPT manual, but absolutely you can do it in your ICD manual. Alright, thank you, good one. 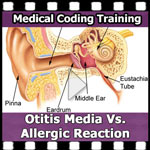