Laureen: Hello. Welcome everyone to the 2015 CPT changes Update Webinar, this is Laureen Jandroep from South Jersey and I have Alicia Scott with me.

What we’re going to do is show the slides on the one side and my coding manual were need to go to right hand side. We’re going to start by talking about the E/M section of the CPT manual, one of the changes they made was related to military history that you can find on page 7 on E/M guidelines, physically it’s just another element that you can count told social history. There are some changes; they had hypothermia code that was in your neo needle intensive care code. Brand new last year 2 new codes and now they’re gone and what they did and they decided that they actually really belong in the medicine section and they combine them.

What I did is on the top of the big cross, this is from my manual from last year so you can see there is two codes here 99481 and 99482. 481 were for total body system of hypothermia, hypo means lower thermia body temperature so they were basically turns bring down the fever. So if it was the whole body that was the first code if we has just a head, it was the second code. So now for 2015, it’s one combo code in the medicine section so we won’t be discussing this can get to that section on the presentation because we got discussing here but basically it’s initiation of selective head or total body hypothermia in the critically ill neonate critical issue you’re gonna do respiratory rate.

Okay Alicia, I think you’re going to do respiratory right?

Alicia: I did, there were a lot of parenthetical changes in respiratory, and they did have some new codes that were added 31575 Laryngoscopy flexible fiberoptic, what they did was for diagnostic, they put it on their do not report this code this 31575 and then the other division that they did. 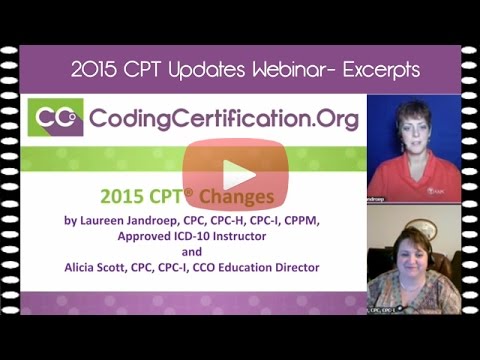 Coding changes go into effect January 1st, 2015. Come join Laureen Jandroep, CPC, CPC-H, CPC-I, CPPM and Alicia Scott, CPC, CPC-I, as they take you through the new CPT 2015 Manual and go over all of the updates. The CPT 2015 Updates Webinar EventI often get asked “what’s changing in CPT for 2015?”My short answer? It’s complicated. ;)

However, as the year comes to an end and a new one is upon us, I am going to finally launch a webinar that explains exactly what is changing in CPT 2015. And I’m going to do it in “warm and fuzzy” Laureen fashion.

What You Will Learn in the Webinar:

– 264 New codes! Learn when to use them and if they replaced older codes.

-And the ones to be most careful about the 134 revised codesCEUs:

AAPC has approved this event for 1.5 CEUs. Index number will be given out at end of webinars and will be emailed to attendees after the event. You must be present at end of webinar to be awarded the CEU Certificate

Get More Information about CPT Updates 2015