Alicia: This was a really interesting question. This came in from Chaim who absolutely is one of our PBC students at present time. He comes in to the Thursday night student webinar calls that we have for our PBC students, our Blitz students, and our Practicode students. It’s not anything like this webinar, it’s very casual and they get to talk back and forth with me.

Q: Diagnosis category codes 946 and 949 – what’s the difference? Can you give an example? Thanks, Chaim

A: Here’s an example: 946 burns at multiple specified sites. That is specific – specified sites. Here is the guideline where you can find this: When coding burns, assign separate codes for each burn site. Category 946 should only be used if the location of the burns are not documented.

You’re thinking, “When would they ever not document burns?” Well, surprisingly it can happen and I came up with an example off the top of my pretty little head, although my grandmother used to say “pointed head,” I like “pretty little head” better. 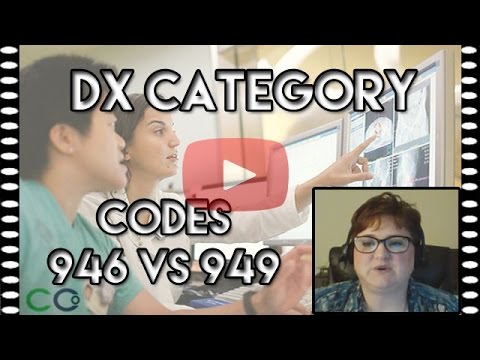 Example: Patient arrived via ambulance with burns to the arms, legs and torso. Degree of burns range from 1st to 3rd degree. Patient was stabilized and life flighted to University Hospital and their burn unit. Perfect example; they didn’t have time to go into specific details, they got him stabilized and boom, he’s out.

What’s the difference between 946 and 949? Burn unspecified.

Again, here is the guideline which is the same place where you’d get the information: When coding burns, assign separate codes for each burn site. Category 949 Burns of specified sites should only be used if the location of the burns are not documented. Category 949, Burn, unspecified is extremely vague and should rarely be used.

In other words, you can probably find a better code, if you have better documentation, but I thought why not we’ll go with the same scenario?

Example: Patient was picked up at the scene of a motor vehicle fire and brought to a facility for stabilization and pre-treatment of burns to 90% of patient’s body via various degrees. IV lines established and patient transferred via Life Flight to University Hospital burn unit.

That actually happens a lot. Not for burns per say but the chopper goes out and they pick somebody up on the scene and their estimated time of arrival could be 15 minutes to the University Hospital – that’s an hour drive away. And they get ready to go up and the patient is not stable enough and so they have to set down at the closest facility, the closest hospital, make sure they’re stabilized. If the person was burnt like this, they might have trouble starting IVs because they can’t find the veins or the veins might not be there anymore. A lot of times they’ll go in and do a subclavian and hit the major artery, the subclavian vein, and put in multiple just like little fingers sticking out where they can put multiple IVs in at one time. But that is a procedure and it can’t be done per se in the helicopter but it’s going to give this guy a better chance of survival, so they’ll set down, take him out, do the procedure and then just go. And they call them “load and goes.”

Again, are you going to see this? Probably not. But if you do, there is a code for it. Do you want to use this code? No, you don’t want to use that code. Most likely you won’t have to, but again, we have a situation where something’s going very quickly, there is a possibility of that.