Q: “Can I ask a strange question. I had an issue with using an E-code for a finger stick. E920.5 “– which would be the proper E-code – “with a V58.30 or 915.8 as primary codes. I was told that the E-codes were only for inpatient usage. I just want to confirm that for future reference. Thanks, Cathy”

A: Looking at the answer, the first thing I want to let you know is no, it is not only for inpatient. E-codes are used all over the place – and Laureen will have to open up that answer page for me. I bet she is responding to your question and not looking [laughs].

This one is a little bit longer. For the E920.5 – Accidents caused by hypodermic needle, contaminated needle or a needle stick – that’s what she is looking that. That would be the proper E-code. 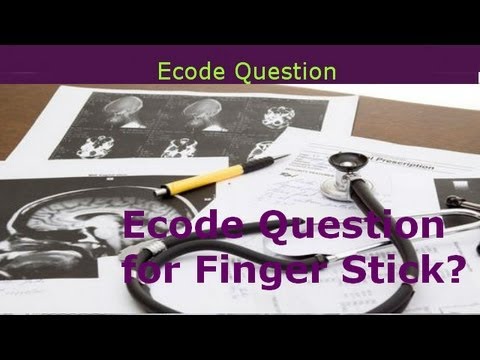 There’re two rules that should stand out in your mind when you see an E-code: 1) it can never be first listed. So, if you see anything on an exam where the E-code is listed first, you can just knock off that one completely. 2) Also, it can never be for subsequent visits, only on the initial visit. And it can be used without inpatient setting, stuck. If your patient has stuck their finger with a needle so I’m going to assume it’s like a nurse was going to go give an injection. I’ve even seen them, they’re doing a lot of stuffs even with the kids, they’ll take that syringe and they’ll stick it into the mattress so they know they’re not going to stick themselves.

So, it would look like this 915.8 with E920.5. So again, you would not use an E-code with V58.30 due to it being a subsequent visit. Look at your keywords in their reports they give you on occasion, it’s not an initial visit. So, down below on the next page, I just created some quick examples. There’s only one of these that you would use an E-code for.

1.)    Mrs. South lacerated her left palm with a steak knife while washing dishes. She is seen today for follow up and suture removal.

– Follow up, no E-code; suture removal no E-code because it tells you that it’s not an initial visit.

2.)    Jimmy fell from the swing set three days ago and suffered a mild concussion. His Mother has brought him in today because he complains of ringing in his ears that was not there before.

– Even though it makes you think well that is a new condition, but see you’re not going to use an E-code saying that he fell from the swing set because he fell from the swing set three days ago. Now, maybe he was seen in the ER or something like this. However, if this is the first visit he is being seen by the doctor – which I didn’t think about that until just now – then you could.

3.)    Mrs. Sands has a confirmed fracture of the left tibia after falling from his ladder    while cleaning the gutters. He will be referred to the Orthopedist on call.

– There’s nothing in there that tells you it’s a subsequent visit. This is an initial visit.

4.)    Cindy suffered smoke inhalation during a kitchen fire. She is here to receive her third respiratory treatment this week.

– It’s the repetition thing: third respiratory treatment for the smoke inhalation. No E-code.

So, just be very hyper aware of the terminology that’s being used, and if in doubt just query the doctor again; but that’s what you need to know about E-codes. And yes, they can be used in outpatient as well. In fact, they’re used a lot in outpatient. 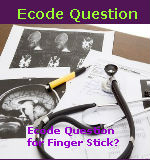