Q: E/M with Diabetes – “When coding say an E/M encounter and the patient has type 2 diabetes documented in the medical record but the patient is not seeing the provider for her diabetes, is it still listed as a diagnosis?”

Alicia A: This one I happen to know as a risk adjustment point of view. I would tell you any time that a patient comes in that they have a chronic condition especially diabetes that affects all the other body systems, you definitely are going to have it listed as a diagnosis.

One of the things that the providers are struggling with these past few years is because they don’t do this. Let’s say we have a scenario which is really hard for us to find a scenario where diabetes isn’t pertinent. If a person comes in with, just say, a respiratory infection and it’s not that big of a deal but he prescribes antibiotic and let’s say he gives him a little bit of a steroid, it’s starting to get into the lungs. He may not list that the person is a diabetic; however, I look at it as a point of view, if he give a diabetic any type of steroid, it’s going to change their blood sugars. 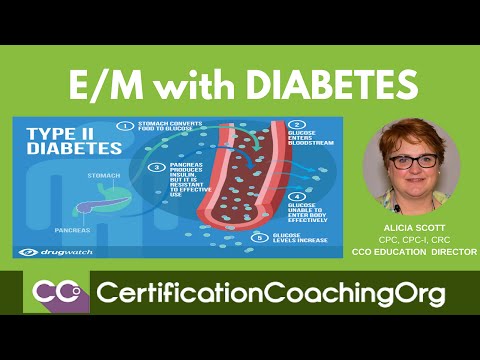 Most usually, the provider will say, “For the next week or the next two weeks, I want you to check your blood sugar twice a day versus once a day or once a week and I want to put you on a sliding scale just in case the steroid affects your blood sugar,” etc., etc., etc. Maybe the person isn’t necessarily on insulin, so they don’t have to do that. Again, it’s probably going to be mentioned, so therefore, it’s listed as a diagnosis.

Now, the thing about it is, don’t think of it in the concept of being a coder for the provider on an individual encounter. Yes, you can list it. That’s the answer to the question; but think of it for the risk adjustment aspect every time that patient comes in and they have a chronic condition, it needs to be listed.

If the person comes in because they stubbed their toe and they’re diabetic, the doctor mentions that they’re diabetic, and because they stubbed their toe and healing… etc., etc., all the disease process for it. But the person also has COPD. He’s not going to list the COPD, he’s not there to see the COPD. So, the traditional coder is saying, “Of course we don’t want him to list COPD because it has nothing to do about this encounter.” But actually it does for a risk adjustment purpose: every time that patient sees a CMS-approved provider face-to-face, every single chronic condition needs to be listed.

Are you going to use it to substantiate a CPT code? No. However, you want that risk adjustment coder to be able to say, “Look, he has COPD and he’s on three inhalers and…” The physician doesn’t have to address it, but you have to have the fact that the chronic condition is listed and I’ve got a line, I’m showing he’s actively being treated by inhalers. So, even if this patient came in for a stubbed toe, I got to collect an HCC for DM and COPD.

So, my answer is, always list them. It doesn’t have to be pertinent to getting paid. You don’t get paid for regular coding on diagnosis coding, you get paid on CPT, so it’s OK to list it.

Is that what you would say, Chandra, or would this change?

Chandra: I’m going to tweak what you said just a little bit. I absolutely agree, especially for diabetes, you’re hard pressed to find an example where the patient comes in for some other condition and the diabetes is not pertinent. Most providers aren’t familiar with risk adjustment and I say that depending on what part of the country you work in. I know when I worked in California all the physicians I worked with were risk adjustment, they knew it inside and out. In Indiana, they look at me like I’m nuts when I start talking about risk adjustment because it’s just a very small portion of our population.

But from a coding perspective, as a physician coder day in and day out, if the provider indicated that a patient came in for an evaluation and management encounter and they were also a diabetic, if that diabetes was potentially going to play a role…I’ll give you an example, a patient comes in, they are following up on a surgery that they’ve had, and, oh by the way, they’re a diabetic. Oh, wow! We want to know they’re a diabetic because it’s going to affect their healing rate and all of that. The physician doesn’t have to be actively treating their diabetes, but the diabetes may have just come into play in the thought process. That needs to be taken into account because there was more medical decision making done around that diabetic encounter, but the documentation has to substantiate it. That’s not to say that it has to have some drawn-out, the patient has diabetes… But it needs to indicate they’re diabetic somewhere, whether it’s the past medical history, hopefully it’s the assessment that they’ve indicated they’re diabetic, it’s being followed by so-and-so.

If they’re on a medication, they need to do a medication reconciliation to identify that not only do I know they’re diabetic, I know what medication they’re on. Hopefully in the assessment they’ve said, “Oh, by the way, here’s who is treating that, here’s who is managing that.” That’s your best documentation to support any kind of audit, whether it be risk adjustment or fee-for-service auditing. 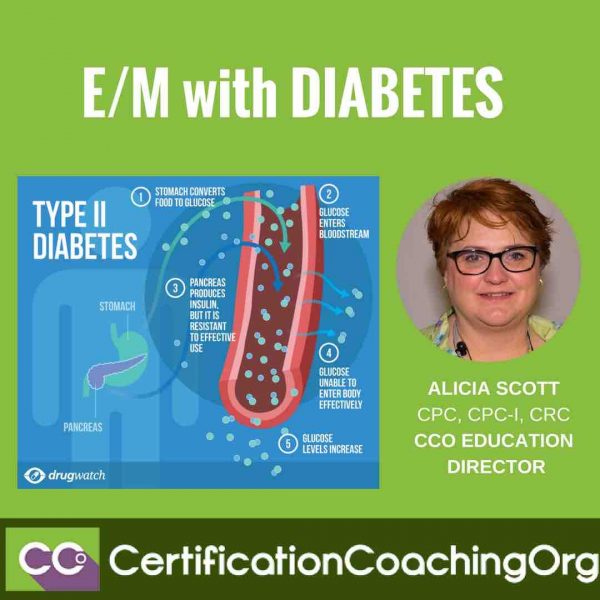