Q: “Provider billed with a modifier 24 with a diagnosis code for trigger thumb only. Does this justify modifier 24? Is it significant enough to warrant payment of E/M within the global period?”

A: Really what this question came down to is, what do we have to have to use that modifier 24? How do we clearly indicate in the documentation that the service is unrelated to the surgery that they had, that they’re coming in for?

The answer to this question is: the documentation is key. The scenario that they gave, we see that the surgery that the patient had was for her shoulder, they had a shoulder replacement, or a repair of some sort. While they were in for their postop visit they said, “Oh by the way, I have this trigger thumb that…” if you don’t know what a trigger thumb is, their thumb gets stuck like this; you could get trigger finger, and all those types of things.

This patient said, “I have a trigger thumb that you treated before and it’s starting to give me trouble again,” so the physician put trigger thumb down as their E/M diagnosis for an unrelated encounter, put the E/M code on, and put a 24 modifier on it. Said, “OK I want to send it out separate from their post op,” and the question that the coder had was “Alright, is that enough? Is just the separate diagnosis alone?” My answer is a separate diagnosis alone is not sufficient. What it comes down to is the documentation. 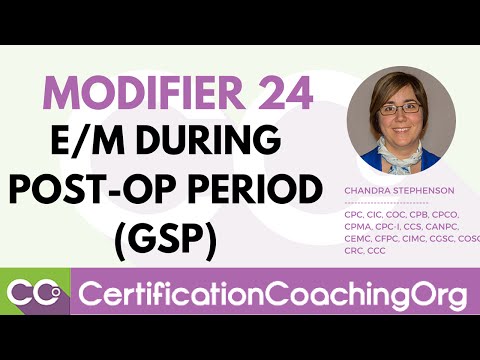 The thing that I recommend using is what I call a “bucket analogy” and this is the way that E/M and separately reportable things were taught to me when I first started working as auditor, and looking at some of these things. The physician that I worked under said, “OK. If you have a patient coming in for a postoperative visit and you’re trying to figure out if something is reportable in addition to that postop visit. Take their documentation, make a copy of it and highlight everything that’s related to the postoperative care.”

Everything that they would normally do as routine workup postop; everything they checked the history around it and all of that. If it’s not related to that surgical care, don’t highlight it. Then you look at everything you have left that’s not highlight, or some people highlight it in a different color, and see if you have enough to justify a separate E/M service. It’s two buckets because if you put it in the postop bucket you can’t use it for the separately reportable. You can’t double dip; it has to be completely separate.

Most of the time what I find is my doctors that are doing this, they have tons of stuff that’s related to the postop care, and they might have a couple of things that are separately reportable related specifically just you, in this case the trigger finger. Oftentimes, they have a hard time getting above a 99212 or a 99213 for an established patient in the office with that modifier-24, but it all comes down to the documentation. Yes, a separate diagnosis is going to support it from a medical necessity perspective. They’re not here for their shoulder, they’re here for their thumb now, so that supports me from a medical necessity perspective, but you’ve got to have the documentation to back it up to show that you went above and beyond what you normally would have done for the postop on the shoulder.

If we can scroll on I actually put in what this person that send in the question said the documentation contained. What I did is I put a strikethrough through the things that in my opinion would have been related to the shoulder. They’re here 60 days postop, they’re also doing their physical therapy, but oh they mentioned that they have trigger thumb injected 16 months ago, and it’s starting to bug her. That don’t have anything to do with the shoulder.

We didn’t examine the shoulder, that’s all postop, but the triggering is noted in the right thumb, so we did look at the thumb. And we scroll down a little bit farther they go on, and say what they told them to do in follow-up for the shoulder, and they’re here for the rotator cuff repair, and here’s what we did. We did a trigger thumb injection 16 months ago, she’s still off work, that’s all related to the shoulder, and then we said, OK we gave her options for what she could do for this time. We gave her a prescription for medication, we told her to come back in a month.

My only issue here is the Daypro that they prescribed. He doesn’t really make it clear is that for the thumb or the shoulder? It’s going to be for both. Well, he has already prescribed it for the shoulder; if so, do we count it, or do we not? It comes down to looking at this, and if whether we count that prescription or not, basically because we say we’re going to do a cortisone injection if she comes back, it’s a new problem. At most, I probably would have been able to get a 99212 out of this one because we only looked at one body system, and we only had one element in history, and you’re not going to get very high in your level of E/M but it all comes down to the documentation. So the diagnosis alone is not enough to use that modifier-24 to unbundle something from a global surgical package, so that’s a recap of the question that came through. 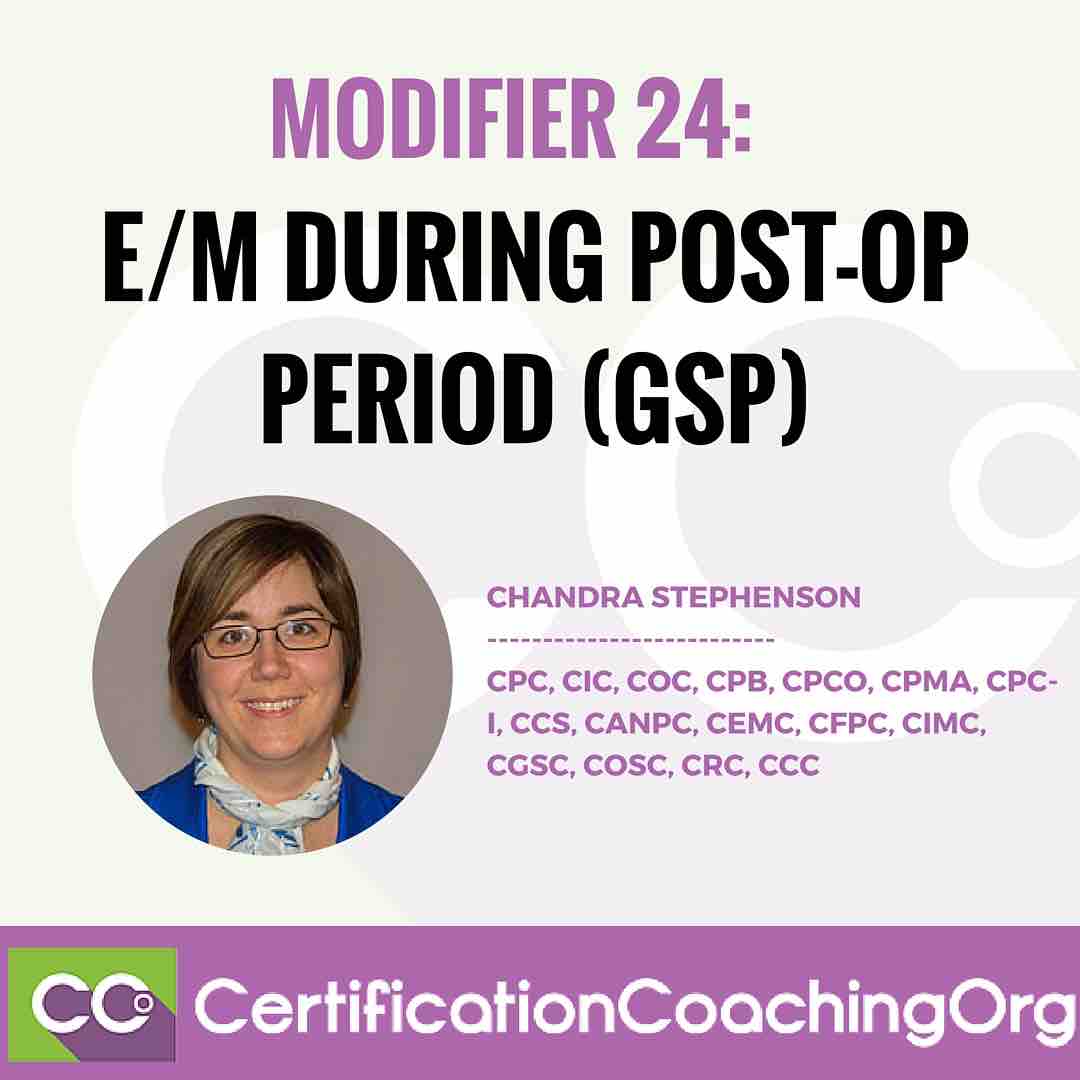