Q: “Can you explain a little bit about modifiers, global surgical package and bundled services?”

A: There’s a lot of information in one question. When we start to talk about these, a lot of times you’re going to hear the phrases “global surgical package” and “bundled services.” When you hear those things, basically what’s happening is the insurance company is wrapping all of the services related to a specific procedure into the payment for that one CPT code. While there may be several CPT codes that could be broken up to represent the different pieces, they say bill us the big one and we’re going to bundle everything in there. Sometimes things are bundled and sometimes they’re bundled into what we call a global surgical package. 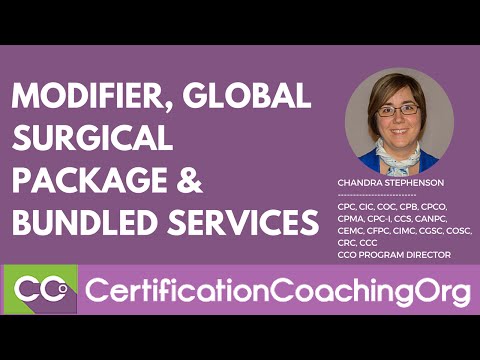 Maybe the patient had a hysterectomy. Those are major surgeries. They oftentimes take a long period of time to heal well beyond ten days and they have what’s called the 90-day global package, which means for 90 days everything that that surgeon does is bundled in to that major surgical package. All those follow-up visits, anything that’s related to the surgery gets bundled up. That’s a shortened version of what a major surgical package is.

I did include some links. I included the links to the Medicare website that show you the difference between major and minor. We talked about major being major, 90 days; minor is 10 days, it can actually be zero days or ten days. Again, those are going to be procedures that don’t take quite as long to heal, and the difference between a zero and 10 days is going to be what all is being performed. Things like scopes. Think about colonoscopy, those usually have a zero-day global because you’re only going to see the patient that one day and everything you do that one day is going to be included. That’s considered a zero day global.

Maybe you have sutures and a laceration, that’s probably going to have a 10-day global period because that skin has to heal and you’ve got to see the patient back in 7-10 days to remove those sutures. That’s all considered part of that surgical procedure of repairing the laceration.

The other type of surgical package that we have and it’s not really a surgical package, but it’s another type of package that we see and that’s the obstetrical package. A lot of people forget that this is another packaging or another bundling. When we talk about major surgery and minor surgery, we were talking about a procedure that was being performed and all the services associated with it were lumped in. Talk about the obstetrical package, we’re talking about a patient who’s pregnant and all of the care related to the pregnancy is lumped in to what we call their obstetric package.

Billing for an obstetric package is a little bit different and each carrier has different rules. The link that I gave you here is actually a link to ACOG (The American Congress of Obstetricians and Gynecologists), a lot of the stuff on their site is pay only. You have to be a member to get it and you have to be a physician to get to it. This is one of the free articles that they put out there.

They actually talk about when that package begins, and it begins when the confirmation of pregnancy is documented. It bundles all of these things together, and you’re going to see if you look at the CPT codes specific to the OB package, that typically that OB package includes 13 antepartum visits, anything before the baby is born. It includes labor and delivery, and it includes the follow-up care with mom. You’re probably going to see her for a day or two while she’s in the hospital before you discharge her and let her go home. Then you’re going to see her back six weeks after delivery to make sure she’s healed OK. Babies acclimating to the household, mom doesn’t have any major postpartum issues that we need to deal with. All of that. That’s another type of package that they’ve bundled that payment together.

Surgical packages were one piece, bundling is another thing. Surgical package includes bundled services, but sometimes bundling is simply saying this procedure is part of this bigger procedure. Maybe when I go in and let’s say I do a partial colectomy, if you go in and do a partial colectomy you’re removing part of the colon. Depending on which part you remove, there may be a specific part to say, “Oh, I did just the sigmoid colon,” or “I did just the transverse colon.” But if you did multiple pieces, a larger code that you can use in place of the one that says I did this piece and this piece. That’s holy cow bundle. Says you can’t bill them separately.

Now, sometimes they bundle things together that are usually performed together and if they’re performed separately or they’re not interrelated to one another, that’s where your modifiers come in. Modifiers are used to unbundle packages. It’s to unbundle surgical packages, to unbundle the obstetric package, and to unbundle bundled procedures.

This is actually a nifty little document that takes you through how to use the database of NCCI Edits, what the different pieces mean, because when you put in two codes together, you’re going to get them to get to show up one right next to the other. They explained what a column 1 code is, what a column 2 code is; and you’ve got little numbers next to it, a 0, a 1, a 9, and it explains to you if it has a zero there, that means you can’t ever bill those two procedures together. They’re mutually exclusive; it’s one or the other. If it’s got a “1” it means “Oh, well, sometimes they go together,” and you might need a modifier to unbundle that. That sort of thing.

They give you, like I said here an example of the difference. If you have a “0” you cannot put a modifier on. It’s not allowed, you can’t unbundle them, it’s not going to happen. A “1” means you can put a modifier on it if it’s appropriate. The “9” means a modifier is not really applicable, it doesn’t have anything to do with that, so they take you through all of the different pieces.

Modifier-24 says, “Hey, the patient was here but I saw him for something completely unrelated to the surgery they had done.” We see this a lot in family practice. Maybe we have a patient who is pregnant, and she comes in for something unrelated to the pregnancy. Maybe she has an ankle sprain. It has nothing to do with the fact that she’s pregnant. We’re not seeing her for the pregnancy, that she sees her OB for the pregnancy. We’re seeing her follow-up on her ankle sprain.

Oftentimes that’s a modifier-24 and states unrelated, totally separate. Modifier-25 is used for some of those minor surgical procedures that it’s decided we’re going to do it today after we’ve already seen them for E/M. They came in for an office visit we didn’t know we were going to need to do a minor procedure. Minor procedure could be anything from a lesion removal, a laceration repair; those types of things. Again, the documentation has to be clear that it was separate, but a -25 says “Hey, it’s separate and we could pull that E/M out separately.”

The last five modifiers are all surgical modifiers; these would go on your procedure code. This usually fall in the 10,000 to 60,000 series of CPT. These modifiers, the first three 54, 55, and 56 are used to break up the surgical package. Maybe your physician has the surgeon but here she’s only doing part of the care. Maybe somebody else did the preop and the postop, they’re only doing the surgery itself. They bill that CPT code with a 54 on there, so I just did the surgery. That’s all I need paid for, don’t pay me for the preop and the postop.

If they only did the postop they’re only seeing the patient after surgery for all that followup you use a 55. If they only did the preop you use the 56. Now it’s important to say that these are the coding rules. Every payor is a little bit different. For example, Medicare really doesn’t like that preop modifier and doesn’t recognize it in a lot of situations, so you need to be familiar with the carrier rules if you’re using these from a billing prospective.

Modifiers 57 and 59 are two additional ones that you see. 57 says that we made the decision for surgery today. 57 is also an E/M modifier but then on the E/M code to say that the service we provided today is separately reportable from the surgery because we’re going to do surgery today or tomorrow, but we just figured out we needed to do it, and decided to do it today, and the doctor has to be clear to say we made that decision during today’s encounter.

Modifier 59 says it’s a Distinct Procedural Service. This is what unbundles two surgical procedures from one another and this is one of the biggest abused modifiers. People think, “Oh, I get an NCCI Edit, it says these two don’t go together and I have “1” that says I can put a modifier on it.” Just because you can doesn’t mean you should. They have to be separate. There has to be something different to use that 59.

Just to recap, global surgical packages could be either a major surgery, a minor surgery, or an obstetric package and those bundled together payment for the type of procedure the patient received. Bundling is not limited just to packages, sometimes CPT codes, one CPT code is bundled into another because it’s a more extensive CPT code, and modifiers are used to break apart those packages, or those bundled services, so that’s a synopsis of those three different concepts. 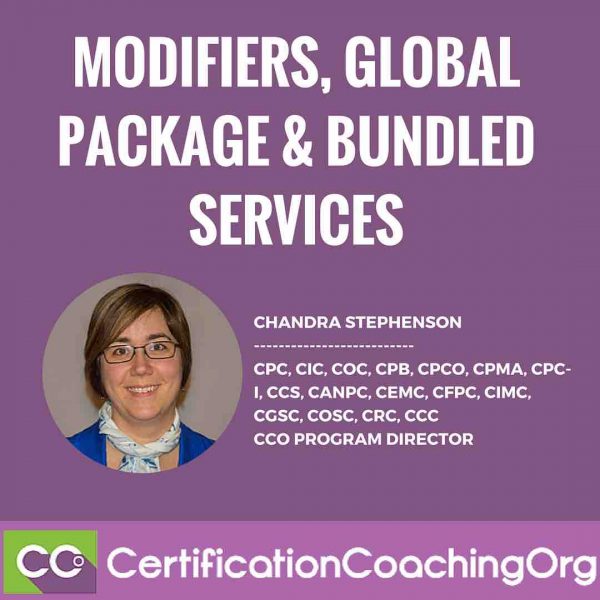