CPT modifiers provide the means by which the reporting physician/service can indicate that a service or procedure that has been performed has a specific circumstance but not changed in its definition or code. The use of modifiers eliminates the need for separate procedure listing that may describe the modifying circumstance. A modifier may be used to indicate whether:

• A service or procedure has a professional component

• A service or procedure has a technical component

• Only part of a service was performed

• A bilateral procedure was performed

• A service or procedure was provided more than once

• A service or procedure was performed on a specific site

• An add-on or additional service was performed

The presence or absence of one of the following modifiers may affect claims payment or result in a claim denial.

Correct modifier use is an important part of avoiding fraud and abuse or non-compliance issues. One of the top billing errors determined by federal, state and private payers involves the incorrect use of modifiers. This is true within the four-state jurisdiction of WPS.

Procedure codes may be modified under certain circumstances to more accurately represent the service or item rendered. For this purpose, modifiers are used to add information or change the description of service in order to improve accuracy or specificity. The documentation of the service provided must support the use of the modifier. There are two levels of modifiers, one for each level of HCPCS codes.

Level I modifiers are two numeric digits. They are updated annually by the American Medical Association (AMA). The explanations that follow some modifiers, while close to the AMA’s explanations, are the carrier’s explanations, not those of the AMA.

Level II modifiers are two digits (AA through VP). They are recognized nationally and are updated annually by CMS.

CPT Modifiers — When to Use Anesthesia Modifier Coding VIDEO 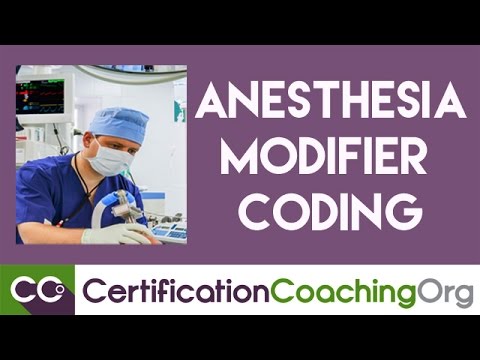 Let’s take a quick look at an example of a CPT modifier in action.

A surgeon performs a procedure to remove a bone cyst in the upper arm of a patient. The procedure also includes obtaining a graft from elsewhere in the body. Due to minor complications, the surgeon is unable to fully excise the bone cyst.

For the procedure, we’d code 24115, for “excision or curretage of bone cyst or benign tumor, humerus; with autograft (includes obtaining the graft).” Since the procedure was completed but not fully successful, we’d add the -52 modifier, for reduced services, to the code, and we’d end up with 24115-52.

Now let’s say that a team of surgeons is performing a closed, or percutaneous, angioplasty in a patients renal system. For this procedure, we’d code 35471 for “transluminal balloon angioplasty, percutaneous; renal or other visceral artery,” and we’d add the modifier -66 for “surgical team.” So we’d end up with 35471-66. Source: http://www.medicalbillingandcoding.org/cpt-modifiers/

Anesthesia procedures have their own special set of modifiers, which are simple and correspond to the condition of the patient as the anesthesia is administered. These codes are:

These are relatively straightforward, but let’s look at an example that will also use some of the CPT modifiers we learned just a minute ago.

Let’s return to that angioplasty example. The patient needs to be anesthetized before undergoing this procedure, so we turn to the Anesthesia section of the CPT codebook and find the code 00216 for “vascular procedures.” Now, kidney problems notwithstanding, our patient is in good health, so we’d add the –P1 modifier to this anesthesia code, and end up with 00216-P1. Source: http://www.medicalbillingandcoding.org/cpt-modifiers/

To view a complete list of CPT Modifiers, you can check out these resources below:

As the year comes to an end and a new one is upon us, Certification Coaching Organization (CCO) has finally launched a video that explains exactly what is changing in CPT 2015. And we’ve done it in a “warm and fuzzy” fashion — The  CCO Webinar on CPT Modifiers 2015 Updates. In this webinar, you will learn about the 143 deleted codes and why they were given the boot. You will also learn the 264 New codes and when to use them and if they replaced older codes and more.