A: Honestly, there really hasn’t been that much of a change. In fact, CMS Medicare hasn’t given us much feedback or examples that consultants and coders have been looking for. But these new modifiers, XE, XP, XS and XU were created to define subsets of modifier 59 which describes Distinct Procedural Services. That just basically means that Medicare had overpaid 40% of claims because of misuse of modifier 59 so they created these very explicit X codes. But I have a feeling that ICD-10 implementation took more of their time and this has been put on the back burner because we really don’t have that much more and they haven’t even come forward with examples to help clarify things.

Any of these codes whether it’s -59 of the X modifiers documentation must support a different session, surgery or procedure, different sites or organ systems, or any encounters not ordinarily performed on the same day.

Some of the facts are modifiers 59 and X modifiers are never to be appended to an E/M code, only procedures or services. CMS will continue to recognize modifier 59 in many instances and be selective when requiring the X modifiers where specific procedure codes represent a higher risk for coding abuse or CMS over payment. That, I have not seen happen but I would anticipate somewhere in the near future it will. 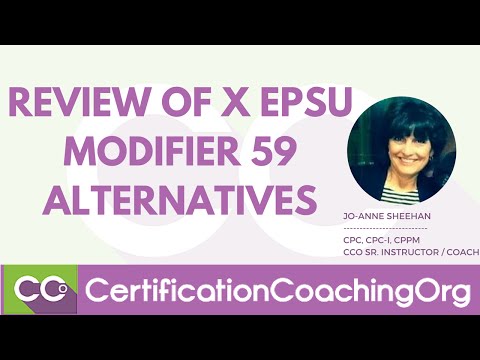 You only want to use modifiers if they adhere to the National Correct Coding Initiative status indicators. That is “1” meaning that the code can be billed with modifiers 59, X (EPSU) on the Column 2 Code. “0” status indicator means it can never be billed together. Basically, that is, is that they are used on the second and additional procedures on the claim form.

The very first procedure on the claim form would never, ever show a modifier -59 or X code. It’s always the lesser valued procedure. With Column 2 procedure codes, they are listed in the National Correct Coding Initiative. If it says “1” then you can add the modifier -59 or any of the X modifiers to the second column procedure code. And you also would use them if there was no other acceptable modifier and I’ll show that as we move forward, what that would mean.

You never want to code a modifier 59 and an X modifier on the same procedure code and on the same date of service on a claim form. That’s not CMS’ rules. I happened to see some blurb on a Blue Shield on one of the Carolinas and it said you should have them both together. We’re focusing on CMS, but I cannot stress enough that if you venture forth into these other payers, make sure you know what the guidelines are.

If a more appropriate modifier can be used opposed to a 59 of the X modifiers, by all means use it. In other words, if a modifier -50 is more appropriate, you would use that as a bilateral instead of listing the procedure twice with the modifier -59 or an X on the second procedure. XE (Separate Encounter) is exactly that. It’s distinct because it occurred during a separate encounter on the same date of service. I extracted different examples from different payor sites from Medicare and just different places to just give you an example.

A physician performs a cardiovascular stress test (93015) and also a rhythm ECG (93040) at a different encounter on the same day. What I did is I took these two procedure codes and I use SuperCoder.com and I entered them into the system. What came forward was the CCI validation saying that the code 93040 which is the ECG is a column 2 code for 93015. If it was appropriate, you could add a modifier to code 93040. I’m sure the other softwares do it as well, but with SuperCoder it will tell you with an asterisk, you would attach a modifier X to the 93040.

If you move down, you’ll see this is what they give you on SuperCoder. These are all the related modifiers so that if for any reason any one of these whether it’s left, right, TA or T1 for a toe, whatever, that takes precedence. But in this case, this the XE would work so you would use 93015 first and then the second column, code 93040-XE.

The next example is the XP and this is basically very basic. It’s two services/procedures performed by two different practitioners performed by two different practitioners on the same date of service in a group using the same tax id#. It does not have to be at the same encounter; one could be in the morning, one in the afternoon and they don’t even have to be the same specialty, but they can be.

XS is the Separate Structure, which is pretty self-explanatory and that is the service that is distinct because it was performed on a separate organ or structure. As an example, a complex repair of the forehead measuring 2.5 cm (13131) as well as a complicated incision and removal of a foreign body, subcutaneous tissue in the arm.

Again, if any of these other codes apply, if they happen to apply, you could use that instead of the XS but this is definitely a good example of how that would work.

XU (Unusual Non-Overlapping Service) is a service that is distinct because it does not overlap usual components of the main service. I’ll tell you, I see so many examples and none of them make sense to me, so I use this one. I don’t know, laparoscopy, surgical ablation, of one or more liver tumor(s) radiofrequency (47370). And, Ultrasonic Guidance for needle placement (e.g. biopsy, aspiration, injection, localized device), imaging supervision and interpretation for Phlebitis and thrombophlebitis of superficial vessels of right lower extremity (76942).

When I put these codes in, 76942 as the column 2 code for 47370, and it did say to append it to the 76942. But I wanted to stress that one of the things that I did see that jumped out at me and I saw two similar examples of this, is that if the 76942 was related to the laparoscopic liver tumor ablation, no modifier would have been required, you would add the modifier if it was unrelated to the laparoscopic liver tumor ablation.

Honestly, everyone that gave these examples with XU in particular have complained that Medicare has not given one example to allow consultants or anyone to really get a handle on what these means, so I apologize if it’s not coming across clear. But I spent a lot of time trying to find something that was clear cut on this particular modifier. Since I had two similar, I used this one as an example but I’m waiting and the day that I see it, I’ll make sure that it shows up on the webinar even if we touched on that XU; but for now, that’s really the best that I could do.

Lastly, I had just one final thing, is something to think about when you’re actually coding and using these X modifiers. That if a physician excises 2 cysts on the left breast on the same day, would you use a modifier 59? The answer would be no, because the CPT code is for a male or female, one or more lesions, and there’s no distinct modifier required because it’s in the description of the CPT.

In summary, coders have to remain diligent in their quest for correct use of these X modifiers. Many payers and Medicare contractors do not offer solutions nor do they accept the X Modifier in certain or all cases. I had mentioned one of the Blue Shields in the Carolinas said they wanted the 59 with an XS on the same line. And coders who had asked about my examples, the last time I presented this a year ago, in Massachusetts, my Blue Shield plan scenario that I offered was actually accurate, but in Medicare and in other cases it wasn’t and that’s why we came back and we visited the X codes because there really has a lot of different questions out there and Medicare has yet to come forward and really help coders and other companies understand better. For now, we just do our homework and when things really start happening, we’ll be able to address it again. 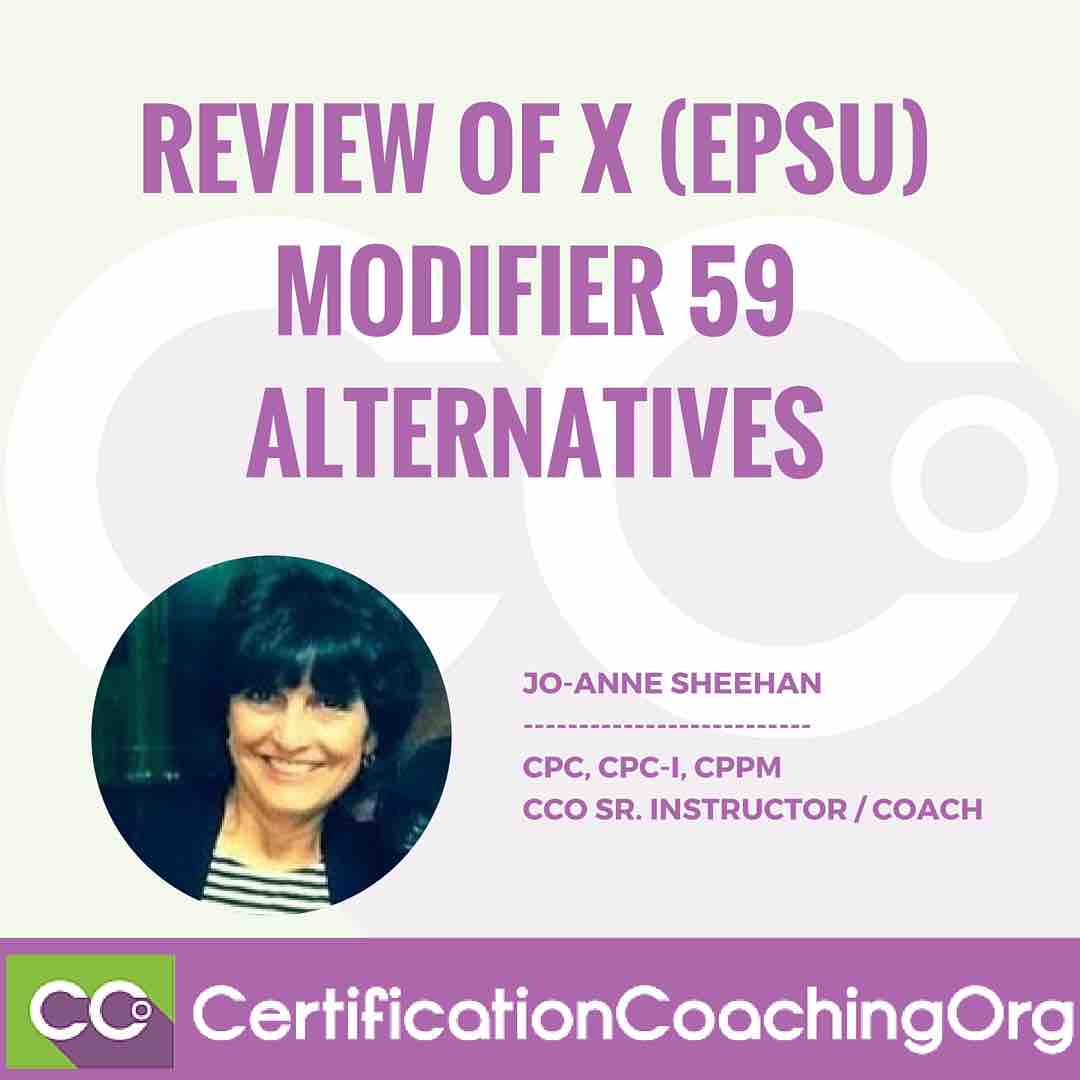