Alright, so where I’m going is in your CPT® manuals, there is a Medical Decision Making table in your E&M guidelines. And it happens to be on page 10. And of course, this is just 1/3 of the E&M you know, when you’re coding by the history exam and Medical Decision Making. And as you can see, I like to mark things up and make it more visual. I actually drew a line and made them look like columns because that’s what they are. To the far right is the score, if you will, or the level of Medical Decision Making. 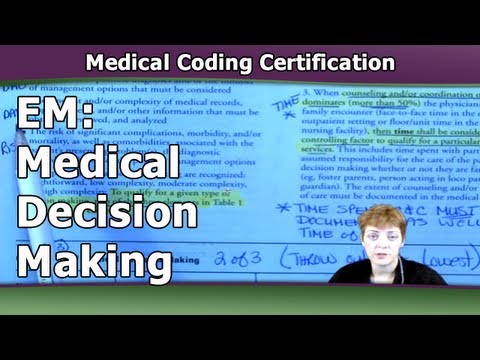 So you’ve got straight-forward, low, moderate, and high. The first column is what I call DMO for number of diagnoses or management options. And then choices you have are minimal, limited, multiple, extensive. And Medical Decision Making is one of the most nebulous areas of E&M to try and score. And you’ve probably seen E&M scoresheets that they and help quantify these things. But for purposes of the board exam, you’re not bringing in an audit tool so you are going to have to use this language — minimal, limited, multiple, extensive. Like for me, okay, I’m like, “minimal versus limited”. They sound pretty similar to me so what you’ll typically find is they count 1, 2, 3, 4. It’s for one diagnosis for management option, limited is for two, etc.

For the second column, data, it’s amount and or complexity of data to be reviewed. So the types are minimal or none, limited, moderate, extensive. So those are the choices there. When they’re talking about data, it could be them reviewing an x-ray or reviewing reports from a test that was run or lab results. Anything like that is reviewing of data. Again, on those score sheets for Medical Decision Making, they’ve got this whole little point system on how they add it up. You know, was the test in the radiology section? Was it test from the lab section? And they kind of come up with a scoring system to figure out if it’s minimal, limited, moderate or extensive. On the board exam, they tend to give you the words, the language to plugin.

The 3rd column is risk. Risk of complications and or morbidity or mortality. So there’s minimal, low, moderate, or high risk and there is a table of risk that if you Google it, you know, E&M Table of Risk. It’s on the CMS website. It is a set table and it will have a bunch of things listed. Like for example, prescription meds. If a prescription is given, it’s automatically a moderate risk, if the physician wrote a prescription. Minimal would be something like go home and gargle or rest, that kind of thing. So you get the idea. High would be like they’re recommending elective surgery or something like that.

So what you do is once you have the words or the levels of DMO, data and risk, we need to do our leveling for 2 of 3. Because when you read the guidelines up above what I’ve highlighted here, it says, “To qualify for a given type of decision making, 2 of 3 elements in table 1…” which is what we’re looking at… “must be met or exceeded.” So let’s see how that shakes out.

If you had a… let’s just say, a limited high which translates to a low, low, high, we can throw out one of the lows but the next lowest remains a low so it’s low complexity. So we can throw out one but not two. And that’s how 2 of 3 you know, leveling works. It works in the Medical Decision Making table and it works with the overall E&M level scoring.

So DMO is the number of possible diagnoses with the number of management options that must be considered. And remember, Medical Decision Making is what’s going in the physician’s head to… after they’ve already taken your history, they’ve talked about review of systems, they’ve done an exam based on that. Now, they’re going to put it all together and decide what to do about it. Are they going to send you for physical therapy? Are they going to order tests? Is he going to write a prescription? Okay?

Data is the amount and or complexity of medical records, tests, or other information that must be obtained, reviewed, and analyzed. So it could be obtained. They might write an order for an x-ray. That’s data. Or they might review an x-ray in a subsequent visit. That’s data, okay. You’ll also hear sometimes with phone calls, when a physician will talk to a patient on the phone. If they document that phone call, they can’t get credit for it that day. But when they come back for the next visit, if they review that phone call conversation, that can count toward data.

And then this third one, risk. The risk of significant complications, morbidity and or mortality, as well as co-morbidities associated with the patient’s presenting problems, the diagnostic procedures and or the possible management options. And some of it seems a little duplicative when you look at the Table of Risk and it’s like, “Well, it’s talking about diagnoses. Isn’t that in the DMO, the number of diagnoses and management options?” And yes, it is. But when you start breaking it down and doing it often enough, it makes sense.

But keep in mind, for the medical coding certification board exam, you’re not going to need to know how to do it from like an auditor’s perspective. Now if you’re going for the E&M specialty credential, they let you bring in an audit tool. And I share a really good one on the E&M you know, webinar that you can use in your day to day coding. It’s actually modified from a Medicare webinar I went to years ago. But it’s all in one page which is kind of nice.