A: The fact is that there is a specific role for this. Now, let me just reiterate for some people what glaucoma is because you kind of have to understand what it is to be able to code it correctly. Glaucoma is that sight-threatening disorder. It’s marked by an increased intraocular pressure, or that’s abbreviated IOP. And the pressure which is in the eye that is too high for the optic nerve to tolerate. But to be more specific, I’ve got a little diagram of what it does. But there are two types of glaucoma – we’ll there’re several types of glaucoma but there’s two main types: open angle and closed angle. This is a closed angle view and just to see the detail on this – this was a really good shot and I want to show it to you. The arrow is showing the pressure building up after the cornea.

If you go to the next page, because it shows you open and closed. You do want to note because remember with diabetes, there’s a default with type 2 diabetes because more people have that. This doesn’t have a default but it’s good to note that open angle glaucoma accounts for 90% of all cases because it’s slow and it’s a progressive disease. Whereas, close angle is more of an acute situation; it happens very quickly and it’s very painful. But most people that have glaucoma, it’s open angle. 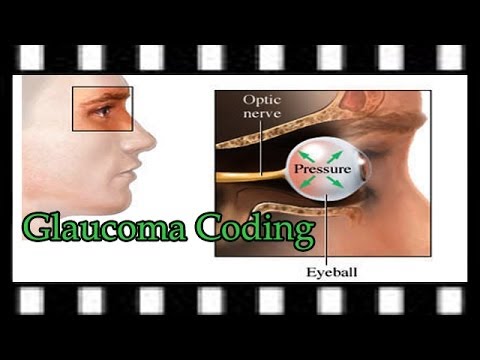 What you’re seeing there, the drainage in the open angle, see behind the cornea and the iris, all that fluid that is there, that is all pressurized; and if the fluid flow from the back of the eye or the inside of the eye and what is between the cornea and the iris isn’t kept at an even balance pressure builds up. But what happens with the pressure is that, you think, “Well, OK, pressure,” but remember that your eye is pressurized and all the nerves and the blood vessels are so tiny in the eye that if you build up too much pressure it squishes them.

Let’s scroll down to the next page and they show…Here’s an example of normal vision and what people see when they start getting the glaucoma, see how it circles and starts getting darker and darker, and you actually lose that peripheral sight. So, the progression of glaucoma if you look at the optic nerve, see the optic nerve there, the red between the yellow lines and it’s nice and fat and juicy looking. Now, early damage though, if you look, see those lines going top to bottom they’re kind of straight; but in the second early stage one there’s that starts pressing on that optic nerve that the muscles start bowing and there’s a little circle or pocket of fluid that starts to build up and if you could see it’s actually inflamed. See the optic nerve starts getting inflamed. Then, in the severe damage that’s what you see when you look in but see how that optic nerve is pushed out of proportion and there’s a lot of pressure and fluid back there, once you get into severe damage, there’s nothing you can do, you lose your eyesight. So, this is something you need to have checked, and lots of different things cause glaucoma, it’s not something I can put in the slide because it really would take so long.

Let’s talk about the differences in glaucoma coding: Bilateral low-tension glaucoma, both moderate stages. Now, there’s a difference between ICD-9 and ICD-10 so I wanted to bring this out because I found this information on a fantastic blog. In ICD-9 you’ve got low tension and moderate stage glaucoma. With glaucoma, you’re going to usually have two codes: the type of glaucoma and the stage. So, we’ve got bilateral, your choices are: 365.12 low tension glaucoma, 365.72 moderate stage glaucoma. Now, that means both eyes (bilateral), that’s what we’re talking laterality here. ICD-10, though, one code, H40.1232 low-tension glaucoma, bilateral, moderate stage. Unlike we talked before where it gives you more codes for specificity, this is one code that covers everything.

Now, the ICD-9-CM guidelines where it’s still an ICD-9, so when you talk about the “guidelines state for bilateral glaucoma when each eye is a different stage, assign one code for the type and one for the highest glaucoma stage.” So, now we’re saying, you can’t get it very specific, you’ll have one that’s less. You’re not able to tell the difference, and you’re not even able to tell if it’s left or right. So, “Using ICD-9-CM for coding glaucoma lacks essential details of the patient’s condition. If we were looking for patient improvement we wouldn’t even know we were dealing with the involvement of both eyes and that only one was mild stage. Of course, with ICD-10-CM laterality and 7th character extensions for stages, there are many more code choices in the chapter. It makes sense in offering specific data of the patient’s condition and status. When data will be needed in the future for pay-for-performance, other healthcare policies, or disease research, the numbers will be there to be crunched.” And one more thing to make note of here guys is that with ICD-9, the reason that this question is even on the slide is because you don’t know what to do. Now, with ICD-10, you don’t have to worry about it. See how specific it is? Less guess work because it is very specific. Look, they got all the information from the right eye and they got all the information for the left eye. No guessing about the guidelines, what do I do; there’s no confusion there, very specific and easy to code. You’re going to love ICD-10. This is when you throw in the whoop-whoop! 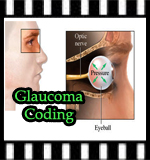