Okay, HCPCS Level II Modifiers. So Linda writes, “Can you please cover the determining fact between using modifiers 22, 23, 24, 25, etc and the level 2 HCPCS codes? Is the ones that go on E&M level and the others on the procedure codes things?” — Thanks, Linda. 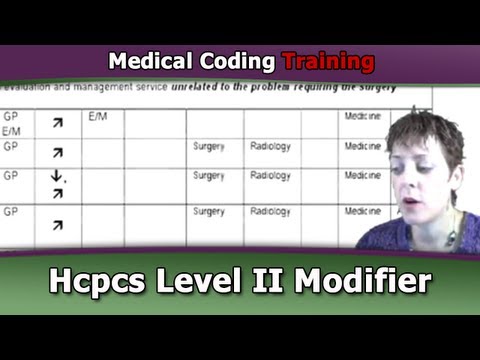 Okay so that’s you know, obviously a big, huge topic. I do have a Modifiers class on demand that’s available on the website. We also have, as many people have taken advantage of the modifier grid that I’m about to show you. And this, you can get from the site. I’ll show you where to get that from. If you go to Free Coding Tools and Downloads, you’ll see the CPT Modifier Decision Grid Tool. You just pop in your name and email and you’ll be able to download it. It’s a PDF and it’ll look like this.

What I did with this grid and this presentation that goes along with it is- I explain modifiers by family versus a numerical order. So first of all, on the slide you know, modifier 22 is gone. That doesn’t exist anymore. But if you look at it this way, that will really help you know when you need to append modifiers and what situation. So I just wanted to briefly go over this.

The families or the groups of modifiers that I’ve identified… maybe you can see different families… are the first big one, the Global Package modifier familiy. If a patient had a surgery and they’re in a global period, your typical major surgery has a 90 day global period. Some other pairs other than Medicare actually can have a 120-day global period. And what that means is during that time after the surgery, when they come in for their routine follow up, that physician’s office cannot bill and E&M because it’s been bundled into the fee they got for the surgery.

But sometimes, there’s exceptions. Maybe, they’re in the global period but they’re coming in for another reason. And that’s what this whole first section of the global package modifiers on this grid is talking about. 24, if it’s an unrelated E&M service by the same physician that did the surgery, you would use 24 on your E&M. If it was the day that they decided to do the surgery, you’re allowed to get paid for that. You don’t get paid for the pre-op visit. So 57 helps tell the payer, “Look, I know this is on the same claim as the surgery and you’re going to think it’s pre-op and you’er going to bundled it in and not pay it. I’m putting 57 on to tell you that this is not the pre-op visit so pay it, okay?”

58 is the staged or related procedure so they… the one the always comes to mind is cleft palate repair. It’s very unlikely that they’re going to be able to do the whole entire surgery in one operative session. So they know, maybe in 45 days or 6 weeks, they’re going to do stage 2 of the prcoedure. Because that’s within the 90 days of the first procedure, they would need to use 58 on the second one to say that it’s you know, the 2nd stage. Now the global period will reset from the date of the second surgery.

76 – repeat procedures, 77 – repeat by another physician, 78 – return to the OR for a related one, 79 – unrelated procedure. So maybe they had hip surgery and they fell and broke the other hip. So it’s unrelated to the first one but they’re being seen by the same specialist so they would use 79.

So you get the idea. Understand it by family and that will help you know when you need to even consider modifers at all. If theyr’e not in the global period then you can just skip over this whole group that we just did.

Then we have bundling or CCI modifiers. We did a.. on a previous webinar, a bit… a segment on CCI so you might want to go back and look for that. That’s correct coding intiative. In a nutshell, they give us pairs of codes and let us know that these two codes should not be billed together becuase they consider one bundled into the other. But there are exceptions to that so that’s where some of these modifiers come in, especially 59.

One of the… Linda had asked about 59 specifically and I had answered it on the discussion board is 59 as to do with bundling. If the two codes, I think her specific question was for intramuscular injections. If they did 2 intramuscular injections, should you put 59 on the second one? And the answer you know, I felt was no because if you see 2 separate injectsion, you wouldn’t expect them to be bundled into each other. So 59 is to say, “I know you normally… these are normally bundled but in this case, they shouldn’t be bundled.”

So an example that I use for that is a patient having an oophorectomy… you know, they’re going to remove the ovary. And then they close them up and then a few hours a later, something is going wrong. They got to go back in and open them up and do an exploratory lap to see what’s going on. Now, the laparotomy is bundledinto the oophorectomy. But because they did a second one later on, that one they can bill for. So they have to put 59 on it because otherwise, the payer’s going to bundle it in and say, “No, that’s… you know, that hits a CCI edit.” So you’d put 59 on the laparotomy to say that this is a distinct procedural service from the other one I’m normally bundled in to.

Let’s see, then we’ve got E&M only ones. Those are pretty self-explanatory. We’ve got numer of surgeon modifiers so I think you can kind of read that and get the idea. So anyway, I just wanted to you know, draw your attention to this modifier grid. It’s a free download. The class that goes along with it, the on demand class is you know, I think one of my very first works I did and I presented that at the AAPC conference for several years in a row and I get asked to do that in a lot of local chapters. So hopefully, you will enjoy that.

Laureen: It’s free. Oh and I’ll just give you an idea of how I teach you to mark up your Appendix A and Ruth brought this out on the forums as well that this is where they actually live, okay. There is a shortened list on the inside cover of CPT but this is where… Appendix A is where the modifier descriptions live. Did I say modifier 22 is gone? I meant 21. I just realized I had said that. And so what I do is I took my grid and I would do my arrows. You know, if an arrow is going up into the right, it mens that you know, without the modifier, it probably wouldn’t get considered payment. If the arrow goes down then I’m expecting the fee to go down because the name of the presentation is Modifiers: It’s All About the Money. If you think about how appending that modifier to the code will affect the reimbursement of it, that will help you realize when you need to use it or not. So anyway, you’ll get a copy of this if you do that on demand class as well.