Q: HIV ICD 10 CM Codes – “On the HIV codes, when do you use the Z code versus the B code? Would you code the patient as being active if they have history of HIV?”

A: When we start looking at the AIDS and HIV codes, we originally received this question that came asking, “When do we use that Z code versus when do we use the 042 in ICD-9?” So we went update it for ICD-10.

I’m reiterating some of the information that Tammy and Alicia covered when they covered this topic back in August, but I looked at it from a little bit different perspective. You’ll find I’m huge on citing my sources, so I wanted to give you where I found the information that helped me make my decision in when do I use the Z code, the Z21 versus the B20.

When we first start looking at HIV, the important thing to understand here is that a patient at this point in time cannot have a history of HIV, it’s not possible. We do not yet have a cure for HIV. Once the patient has HIV, they have HIV for life. From a coding perspective, it simplybecomes do they have symptomatic HIV or do they have asymptomatic HIV? 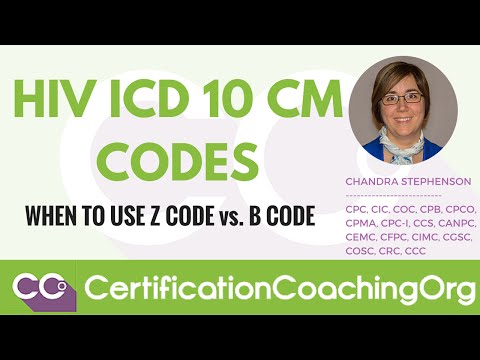 It was funny because when we were looking at our answer sheets earlier today, Alicia goes, “I love this little timeline thing, how do you get that?” I said, “The CDC website” because that’s actually where this came from. What I did is, if you didn’t know this, the Federal government, our Federal government here in the United States has a website devoted to AIDS and HIV because for years it was so rampant and it’s still a very large thing that we have to deal with.

They actually estimate that up to 18% of the population that has HIV has no idea that they have HIV because they’re asymptomatic. What they explained is that there are really three stages of HIV. There’s the Acute Infection point where the person first gets infected and their body, it’s a virus so it’s replicating constantly. That’s that acute infection timeframe. Usually, they might have some flu-like symptoms. It’s going to be a bad flu, it’s not going to be, “Oh, that was a piece of cake.” That’s kind of all the more they’re going to get. They’re not going to know. It’s not going to be any abnormal, crazy, “Oh, I must have HIV, that’s what this is.”

Then, they fall into a period of what we call Clinical Latency. That means that the virus is just there, doing its thing replicating, not making them sick but continuing to spread throughout their bloodstream. It’s reproducing at a lower level than that initial thing, but it’s still considered active infection. Both of these, we’re still talking about an asymptomatic patient. They have not yet had a symptom related to their HIV.

When we talk about symptoms related to their HIV, CDC actually defines AIDS, their CD4 cells fall below 200 cells and that’s when it’s progressed to AIDS. They actually go up to explain that it’s not just the CD4 blood counts, it’s actually about whether or not a patient has had what we call an OI or an opportunistic infection.

Those first two stages, the acute infection, the clinical latency, we don’t have any symptoms associated with those. Yeah, they thought they had the flu, but it’s not necessarily asymptomatic, it’s not an opportunistic infection. When we start looking through here, the guidelines actually say, “OK, if they’ve not had a symptom of HIV, they’re asymptomatic.” Usually, the provider is going to call this HIV positive, known HIV, they have a history of an HIV-positive test.

The important thing to note here is this is not where the provider uses the phrase AIDS, and I did not put this in this note, but this was a question that I have had people ask me as I’ve done trainings, this is not if a provider writes the word ARC (Aids-Related Complex). That’s actually a lot of providers in the infectious disease world will call it ARC when the patient is first beginning to experience an opportunistic infection, which is an HIV-related illness.

When we talk about Opportunistic Infections, these are things that take advantage of the patient’s weakened immune system. I think about it as, it’s going to take a patient nearly to death’s door, and it could potentially be fatal for them. If we start looking at these, think about this. Candidiasis of bronchi, trachea, esophagus, lungs, that’s a fungal infection down in there. A patient with AIDS or with HIV has a compromised immune system, they’re not going to be able to fight off these infections as well as a normal healthy patient would.

By definition, if a patient has HIV, and they have or since the time of their diagnosis has had one of these 20 conditions, they have AIDS, they have full-blown AIDS. The most common question I get is, “Well, the doctor didn’t call it AIDS.” If the doctor documents known HIV and then the history it says “history of invasive cervical cancer.” At a bare minimum, you need to be querying the provider and going, “Was that before or after their HIV diagnosis? Is it related?” Because if it’s related, that patient has AIDS, they should be reported using B20.

That’s one of the things I see most frequently. I see a lot of coders go, “Well, the doctor didn’t say that, the doctor just said this…” It comes down to understanding the disease process and knowing these different pieces to know what to look for in the record. Because yeah, the doctor may have said down here HIV positive, but in the history they may have said “HIV positive with a history of histoplasmosis.” Well, I got news, histoplasmosis is almost always HIV-related.

Another common question I get is, “What if our doctor doesn’t know that they’ve had one of these Opportunistic Infections and just write ‘HIV positive’ and I coded it as a Z21.” We already have that problem with the ICD-9 codes that we did before we went to ICD-10, the same process is likely to occur. If you’re not familiar with that process, when you report those codes to the insurance company they’re looking at their files and they’re going, “Oh, but we showed that this patient actually has AIDS.”

More than likely, what happens is you get a letter from the insurance company saying, “According to our records, this is a patient with full-blown AIDS. Please verify your documentation so that you know, “Oh! We need to get clarification from the patient or from the patient’s past medical records, but it looks like we need to adjust our diagnosis because they don’t really just have HIV, they have full-blown AIDS.” Oftentimes, is that the provider doesn’t know the nuances and the differences from a coding perspective, because remember, coding and clinical don’t always match 100%. We’ve got to come to that common language and explain how it’s different from a coding perspective.

For AIDS and HIV, when we talk about B20 and Z21, it’s all about are they symptomatic or asymptomatic, which comes down not to their blood cell counts but have they had an Opportunistic Infection or HIV-related illness.

Laureen: Just a few clarifying questions that came in. Lina is asking if the patient is being treated for cancer, we don’t need to report their HIV status?

Chandra: I would disagree with that statement. Every insurance company and actually the coding rules, the way that they have always been explained to me, even if you look in the ICD-10 guidelines, HIV is the only condition that is considered to always be clinically significant. It’s expected to be reported on every encounter for every provider that sees that patient from the time of diagnosis until the time they expire because it does factor in to so many things and there’s such a high risk around transmission, but that is the one disease that they track extremely closely. I would encourage you to report it on any HIV patient that you see.

Laureen: Debbie said, “So, HIV is either asymptomatic or symptomatic, no personal history of?”

Chandra: Correct; because we can’t cure it yet.

Laureen: Candy said “I’ve always heard that if the patient has HIV in their past history, you always have to code for HIV. Is that true?”

Chandra: Yes. Because again, HIV never goes away. At this point in time, it can’t be cured. It can be controlled with medications especially if we catch it in the asymptomatic phase, but once they have HIV, like I said because we don’t have a cure yet, they have HIV for life. It’s the one condition that’s always considered clinically significant, so it needs to be reported any time that patient is seen. The order simply changes depending on why they’re there.

If you have a patient coming in and this goes back to the ICD-10 guidelines, those Chapter 1 guidelines. You have a patient coming in for an HIV-related illness, maybe they’re coming in for histoplasmosis, maybe they’re coming in for a Kaposi sarcoma. Those are things that are inherently HIV-related. The guidelines tell you, “OK, the HIV has to go first.” If they’re coming in for something completely unrelated, maybe they sprained their ankle, “Oh, I sprained my ankle, I need you to take a look at my ankle,” but they find out during the intake this patient is HIV positive. They don’t have AIDS, they have HIV or if they did have AIDS, that still needs to be reported but the main reason they were there was the ankle sprain, the HIV would be kind of an “Oh, by the way,” at the end that we get put on there. 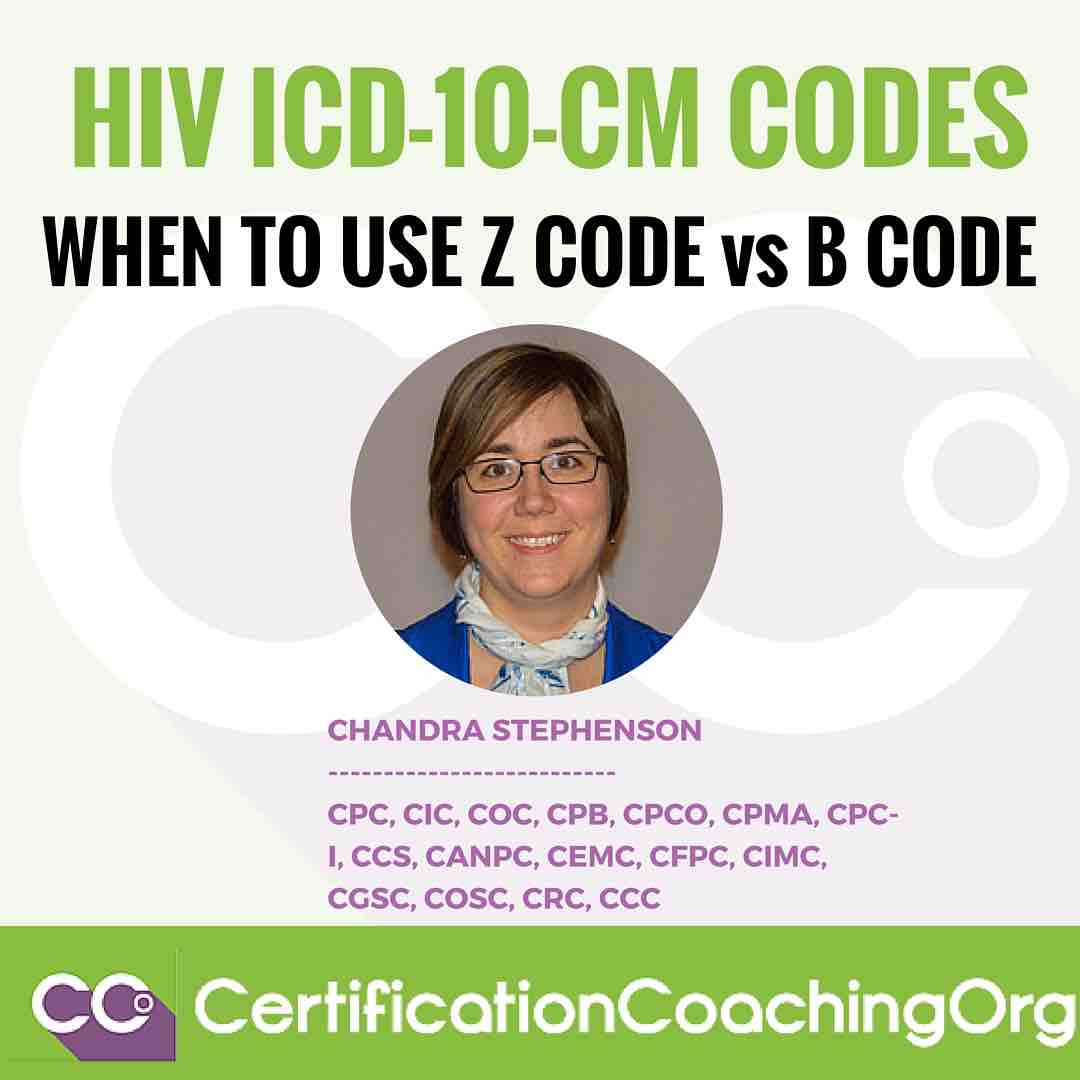