Q: HPI for Multiple Chief Complaints – “If the patient presents with 3 complaints not chronic illness and there are 1-3 elements documented for each complaint that this would support an EPH HPI.”

So, people who are like me who may want to go in there complaining about knee pain and then they want to complain about ringing in the ears – that type of thing. So, the only authoritative source that you’re going to be able to find is going to be whatever carrier that you’re billing for. CMS isn’t even going to be the authoritative service on this because every carrier can set their guidelines that they want to use for determining their HPI. I can give you some rule of thumb but you’re still going to have to go back to that carrier. 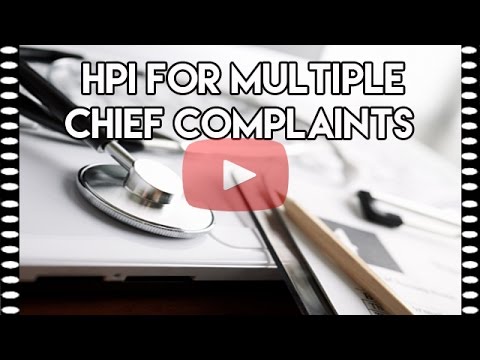 I want to give you just a couple of examples and once again you’re going to have to go back to your carrier and get their official word on how they want it done. Now, I’m a remote coder, I don’t go to the carrier, I go by whatever facility that I’m billing for because they have already gone to the carrier in my place, so that’s good and I don’t have to do all that research my own self.

But one place that we coded for, I used all of the elements from the CCs that we’re addressing the HPI and then so if one chief complaint only gave me duration and location and then another chief complaint gave me modifying factors and quality, then I would count each one of those so I had a total four to do that. So, just mix and match until I got one.

I do know that there are parts of the United States that will allow you to count an element twice, such as if you had shoulder pain and you had that for five days and you had chest pain for two days, then the chest pain and the shoulder pain each counted for 2 points for location and then 2 points for duration because each one gave you a duration. Now, I would be leery of using that unless I got that directly from a carrier. Now, if that did happen, woohoo! That’s great news!

To do that, there’s also been one that’s probably more about what your question is related to. That would be where you do pick a chief complaint with the most element, not the one that does the best for physician. The most element, but you still get to use as other CCs that you would use in associated signs and symptoms. So, you’d get an extra point for doing that and maybe that would give you your four that you would need.

It’s really and surely the best thing I can tell you, you’re going to have to go to your carrier. As with all auditing, we always have to go back to the carrier that we’re auditing for. So, if this is a BlueCross BlueShield coin, then I’m going to go to BlueCross BlueShield of whatever state I’m in and I’m going to say, “Hey, how do you treat your multiple chief complaints for your HPI, how will I count this element?” and then that’s what I’m going to do for that. That’s the basis of auditing. We always have to audit per carrier guidelines because CMS does not give us a definitive guideline that every carrier uses. Some they do, some they don’t. This would be one that a little bit on the gray side, so you do need to go to your carrier for that.

I was just going to add that when you’re talking to the carrier, you should try and get in writing.

Laureen: What I used to do when I run my rehab practice and we had to do it, if I had a phone call I’d always write a letter and it’d say, “Per our conversation, it is my understanding that…” and I’d re-state what we spoke about and basically send it to them so that if they wanted to contest it they’d have to write back. So, that’s a little tip.

Tammy: Right. And absolutely you do, you want everything in black and white because you know what it is, if it’s not a black and white, it never happened.

Find out More Information about HPI for Multiple Chief Complaints