Laureen: First up is Alicia on some burns.

Alicia: Oh, that’s right. And we’re doing ICD-10, the ICD-10 Full Course is doing great, and so Laureen and I had talked about it and we’re trying to incorporate ICD-10 stuff through the webinars to give you exposure. Of course we do ICD-9 as well as CPT, but just to give you a little bit of a taste of it.

Q: This question came in, said: When coding ICD 10 CM associated with burns by degrees and the TBSA also incorporate into the code?

A: I think what they were asking is, how are we going to code burns including degrees and total body surface area? So, first of all, if you don’t know what TBSA is, that is Total Body Surface Area. That’s where you get into the rule of nines. If you don’t know the rule of nines, you need to familiarize yourself with that. It’s not something that you have to have memorized because you can always access it, the information is out there. I think that we have done a previous video – there’s probably a YouTube video clip that Boyd put out when we talked about burns and coding before where we showed the rule of nines, so that’s something that you can go and access in our YouTube link. 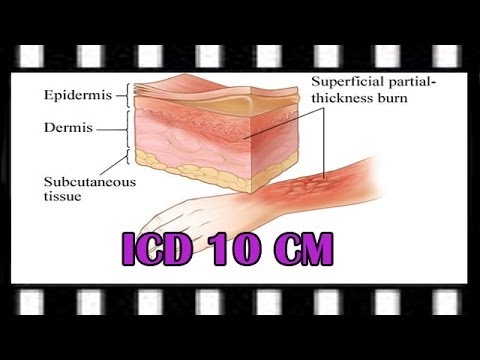 So, the codes for doing Total Body Surface Area is T31 and T32 – two codes for that; but when you’re doing a burn that’s going to be T20-T25. That is done by specified site. Now, another guideline that’s included in that is to use external cause code to identify the source and the intent of the burn. I know that kind of sounds weird but what that is actually doing, these X codes and that Y code, that kind of replaces E-codes. So, if you’re familiar with E-codes, E-codes are gone now for ICD-10 but the content is still there and they’re going to be classifying under X now. So, there’re some ranges of where you would find those external causes.

I gave a little example and I put on here: Pt seen in ER with 1st degree burns to the chest wall. Pt stated a boiling pot of water tipped while on the stove and he caught it with his chest.

T31.11 is the Total Body Surface Area burns involving 10%-19% of the body surface with 10%-19% 3rd degree burn. We don’t have 3rd degree burn, we have 1st degree burn, but its 10%-19% of the total body surface area. Then, we have an external cause, now we know that it was from water boiling on the stove, and so we have an X code that gets us contact with other hot fluids, initial encounter, contact with water heated on stove. That’s equivalent to probably E-codes you seen in the past. That’s one body surface area, first degree burns.

I decided to step it up a little bit. What if we have multiple sites and we have more than one degree of burn on our patient. We have: Pt brought in by ambulance with 3rd degree burns to chest with 2nd degree burns on Rt. Arm to the elbow. EMT stated it was d/t a fire in bed. Pt fell asleep while smoking. Pt son was able to put out the fire and called 911. Then, notating here: 3rd degree is 18% TBSA (because it’s on the chest).

Now, the 2nd degree burn is on one arm, which would be 9%, which gives us a total of 26% TBSA. That’s just the knowledge that you have with putting the percentage, but when you go to code it, our first code T21.31A – burn of 3rd degree of chest wall initial encounter, now you always start with the highest degree burn, and we have a 3rd degree burn so that would be listed first.

Then we get to do that T31.21 – burns involving 20-29% of body surface with 10-19% third degree burn. Now, notice 10-19% was third degree, because we have 18%, it’s just the chest wall. So that code covers all the body surface area that was burned, the total, up to 26% because it goes to 29 and 10-19% was third degree. I think I left off, there is actually an X code for your mattress catching on fire because you were smoking and I guess I left that off. I meant to add that, I’m sorry. So that gives you something to go look up. Go look up the X code for a mattress fire and due to cigarette smoking. Sorry, I probably wrote it down somewhere. Actually, I think it’s X08.01A, I believe that’s it. I see it on my notes behind me.

Laureen: I was going to say, I hope you don’t have that memorized [laughs].

Alicia: [Laughs] Yeah, because I’m so good. No. But that’s what you have to keep in mind for your burn coding, you need to know first the degrees then the total body surface area; and then if you’re given the information, the X code that will give you the reason that they were burnt.

Laureen: We have a question, zero or “o”? I know you like to talk about that.

Alicia: That is a zero. I’m sorry, but you’re right. Really, I like to always reiterate that when you’re using a zero, use a strikethrough so that you can just differentiate; but anything after the first character will always be numerals until the last character which will be either an A or an S, or something that is telling you what encounter it is: initial, subsequent or sequela.

Laureen: Oh, is that what she was questioning?

Alicia: Oh, yes, she’s correcting my math. Sorry about that, you better correct that on the slide.

Alicia: Now, if you go back and look at that code though it still covers that because it goes from 20-29% so you’re still good.

Laureen: Alright, very good. I think that answered a couple…Yes, this is ICD-10 for those that are asking. If you’re like, what am I looking at? Gotten up to speed with ICD-10, that’s what this question is.

Get More Details about ICD 10 CM