Another thing about ICD-10 is that you kind of need to understand the disease process when coding an ICD-10. You do that with ICD-9 but it’s so much more in ICD-10, so I thought I’d pull out something, like one of the body systems and then go in and let’s talk about that and understand the disease process. So, I picked Gastrointestinal Ulcers just because I had information on it, but it would be something that some of you might be able to learn from.

Contributing factors: reflux, hyperacidity in the stomach, extended use of anti-inflammatory drugs (aspirin or ibuprofen, there’s a lot of arthritis medication that will be an influence), steroids, alcohol, smoking, and presence of Helicobacter pylori bacteria.

They actually will go in and do an EGD and take a sample and make sure that you don’t have this because if you have these bacteria, it will cause ulcers.

The signs and symptoms to look for: burning pain in the stomach or epigastric region (which would be up in the esophagus in the back of the throat), weight loss, nausea, vomiting, anemia – from blood loss, because when you get an ulcer it can actually be a bleeding ulcer.

What type of testing do they do to determine that you have an ulcer? They do upper GI’s and barium studies (endoscopy) where they actually have you drink a chalky substance and they take an x-ray. They go in endoscopically and do an upper GI where they literally take a camera in there and they go in, they take pictures to see if there’s anything going on. Then they can actually visualize the lining of the epigastric area and the gastric (the stomach) to see if there’s an ulcer.

Then, there are several blood tests that they can do that would indicate whether a person was suffering from an ulcer; they can do a hemoglobin test, the hematocrit and serum gastrin and amylase levels. The hemoglobin and the hematocrit are decreased in a patient with bleeding from the ulcers, and that’s because this is blood levels. Serum gastric and serum amylase levels are actually increased. Then, they can do stool samples, which can be positive for occult blood. That’s where they literally take feces and put it on this little card and it turns to a specific color if it’s got blood in it. 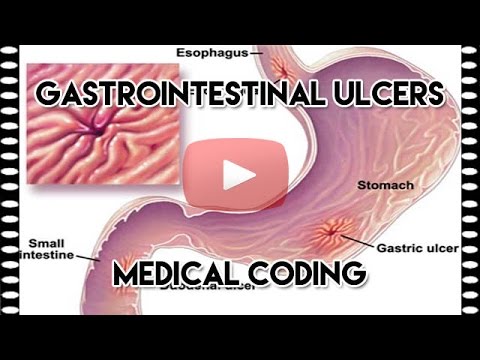 Treatment – what are they going to do to treat it if you are diagnosed with a gastrointestinal ulcer? Really the main treatment is treating the signs and the symptoms, but they’re going to try to eliminate the contributing factors. They’re going to give an antacids and dietary restrictions to neutralize the gastric acids, so they’re going to tell you things like, “Don’t eat tomatoes, don’t eat things that are acidic or irritants to the lining, like chocolate and coffee.” If they do find that this bacteria present, then you’re given antibiotics. They want you to start on nutritious and regular meals; a lot of times when a person has some type of a gastric ulcer, they stop eating or they’re not eating proper foods because it hurts to eat, it’s so uncomfortable. So it’s encouraged that they start back on regular meals. Then, they give you medication to reduce the acid in your stomach. This is called anticholinergic drugs or you could call it like antacid-type drug and you see those advertised on TV all the time, there are several good ones out there. But you don’t want to have to take them for long periods of time.

Last, if nothing else works, they’ll go in and do surgical intervention especially with hemorrhages, because you can actually get a perforation or an obstruction or the pain will be so bad that they need to go in and literally do something to alleviate the discomfort.

So, when you’re doing ICD-10 it’s really important that if you’re doing a specific body system to familiarize yourself with the information about the types, the contributing factors to the disease process, the signs and symptoms. You want to know what type of clinical testing, there’s usually lab testing done, and what are they going to do to treat it? That is going to help you with your coding and substantiate that it is an active disease process going on.

Alicia: The letters in the beginning?

Alicia: Yeah, it’s just the division on how they divide up the chapters. So, instead of the first number in ICD-9 telling you, kind of helping you decide what chapter you’re in, the letter is going to do it now for you. So, nothing’s really changed except it’s kind of like you have a prefix, and then they also added suffixes to the end of the codes. Hopefully that will explain it for you.

So, each chapter will have a letter and then you’ll know by that letter what body system or what diseases you’re working in. And not to say that OB-GYN is a disease, pregnancy and stuff, but it’s going to be in the “O” section and neoplasms are in the “C” section. So, if you see a code that starts with a “C” it probably will have something to do with neoplasms whether benign or malignant, but it will be a neoplasm.