Medical coding for pressure ulcers – these are fun, not quite as much fun as neoplasms, but most people that start out in the medical field when they’re young they end up working in, they used to be called nursing homes now. They are skilled facilities and stuff like that. So most of us have time in there, and pressure ulcers are something that is kind of the bane of the healthcare profession because they are very hard to treat and prevent. 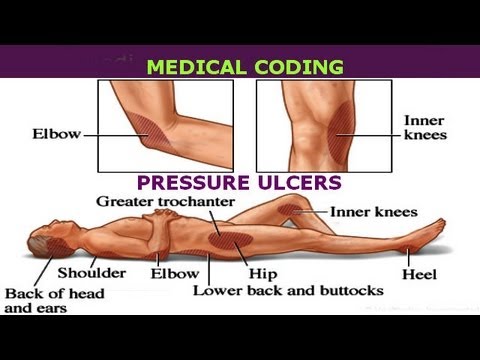 A: First, let’s figure out what a pressure ulcer is.

Pressure ulcers on the skin reduce blood flow to the area. Without enough blood, the skin can die and an ulcer may form.  An ulcer is literally like how you get a cold sore on your lip or something like that. That’s what’s happening.

You are more likely to get a pressure ulcer if you are in a wheelchair. It doesn’t matter how old you are but you’ve got constant pressure on your buttocks, in your sacrum and stuff. Usually if you’re in a wheelchair you can’t feel, so you don’t know when it’s starting to go numb.

If you’re an older adult, cannot move certain parts of your body without help because of a spinal injury or multiple sclerosis, have a disease that affects blood flow including diabetes or vascular disease – like PVD or neuropathy or stuff like that and you’re not able to feel. You have Alzheimer’s disease or another condition that affects your mental status. In other words, you’re sitting for a long period of time and you don’t think to get up.

You have fragile skin, the older you get, if you’ve noticed if you look at somebody that’s a whole lot older than you, you’ll notice their skin gets papery thin and you can see the vessels and stuff. You have urinary incontinence or bowel incontinence. Again, this goes with Alzheimer’s disease, if you’re sitting in a chair – and Alzheimer’s isn’t like you forgot where your keys are. Alzheimer’s is like when you can’t remember what a key is used for. If you can’t remember that you have to go to the bathroom when you feel that discomfort, you have urinary incontinence. You do not get enough nutrition (malnutrition) – that’s another keyway to have problems.

Here are the main places that pressure ulcers occur: The back of the neck, the head because of the bed, on your elbows. If you’ve ever had to be bedridden like if you were pregnant or something, they made you stay in bed for a long time and you’re constantly pushing yourself, sliding yourself up in the bed, you’ll get pressure ulcers on the elbows. Your sacrum (the tailbone), buttock area, because that’s where people like to lay on their back and stuff, or on their sides or sacrums; that’s why they say you have to move every two hours or more often. The ankle and the heel, you don’t think about that, but if you’re not moving and your foot sits for two hours in one position, your foot can go numb. So, that’s the most common places.

Let’s get into the coding aspect of it. These are the common codes for pressure ulcers: You’ve got 707.00 and they start with a zero. It goes all the way down to different body parts and they mainly list those red bulleted areas that we were talking about. Then, there are stages. Now these are going to be 707.02 codes and each one of those is going to indicate a different… I did list all of these because I wanted to give you this description so you have a better understanding.

Stage 1 is considered a superficial lesion with discoloration of the skin, but the lesion is not actually an ulcer at this point. It presents as a non-blanching reddened area on the skin. Stage 1 indicates a higher risk for serious pressure ulcer but does not cause much suffering or increased treatment burden.

This is why the nurses will go in and they’re supposed to go in and check often your elderly people that are in the nursing home, that are on bed rest or bedridden. They’re constantly checking the skin to make sure that this is not happening.

Now, let’s jump to Stage III and it goes Stage 1, 2, 3 and 4… Stage III, the difference in that is you’ve got serious pressure ulcers with full thickness skin loss – if you can imagine that—and damage or necrosis (dead) that extends into subcutaneous soft tissues.

So, now you can see why your terminology is very important. You need to know necrosis means dead and subcutaneous – what layer is the subcutaneous and that’s where it’s getting into the fat.

Extensive treatment and direct suffering are involved at this stage. So, Stage III is pretty bad, but it can be healed and pressure ulcers have to be healed from the inside out. That takes a long time. Can you imagine a bedridden person who is a diabetic already having a Stage III? It could be life threatening for some people.

Let’s say we have a pressure ulcer of the left hip stage 1, pressure ulcer of the right heel stage III. This is kind of misleading because one of the guidelines for ICD-9 about the order to code things in, you would think okay the first listed thing is pressure ulcer of the left hip stage 1, so we’re going to list that first. But, actuality you don’t. You always go with the most severe and a higher stage is a more severe ulcer. It doesn’t matter where it’s located on the body; they want to know about severity. So, we’re going to code first the ulcer that’s a stage III – pressure ulcer of the right heel, that’s 707.07. Right is the modifier. And what stage? It’s stage III. It’s real easy because it ends in a three, so you know the stages are 707.02 and whatever stage it is, that’s more likely the number. So, we have stage III. It gets listed first, it’s more severe.

Then, we have another pressure ulcer, 707.04, it’s a modifier left for the hip and it’s a stage 1, 707.21. That’s how it’s coded. You would not code the (.07) and the (.04) and the (.23) and the (.21). You want to keep them separate, so you list the ulcer and what stage. The ulcer, what stage? And people can have multiple ulcers. Now, if you want to be more educated on ulcers, one of the best things you can do is go Google it. I did not add any of those pictures because we don’t know how many of you have weak stomachs, but they can pretty horrendous. If you’re into wound care coding, you’ll have a lot of these in there. Pay attention to that, Google pressure ulcer images if you want to see how bad these can get and how they can be life-threatening if not taken care of. But that’s how you code them. 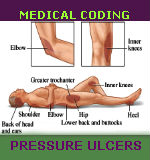