Q: If I’m planning on taking the CPC or the CPC-H exam this year (2013). Will I still have to be recertified again next year for ICD-10? I have heard several members state that it is mandatory for everyone and is offered online without being proctored. Would you advise that I just wait and take the exam next year with all of the upcoming changes? Some members are saying that it might not occur in 2014 due to the expense of the software for providers. Any advice would greatly be appreciated! Sincerely, Sally. 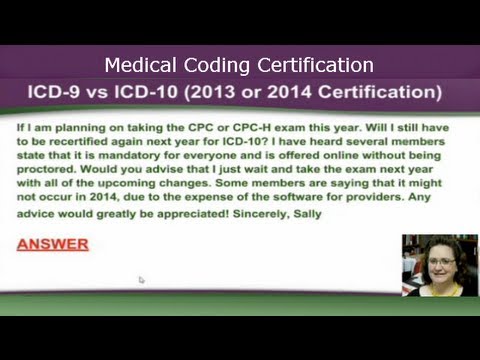 The ICD-10 Proficiency Assessment –what is it? The only step of this roadmap – or getting ready for the ICD-10 – required for all certified AAPC members (excluding CIRCC, CPPM, and CPCO). You should prepare yourself as you would for other exams or assessments. To ensure employers continue to have confidence in a certified coder’s ability to accurately code the current code sets, AAPC certified members will have two years to pass an open-book, online, unproctored assessment.

Those are the main questions that I get from people. They say, do I have to take another exam? Yes, you’ll have to take another exam. Is it going to be like the CPC? No. It’s not going to be like the CPC. The CPC is a five hour and forty minutes exam. It covers both CPT, ICD-9 and HCPCS. Is more like practice management questions, anatomy, physiology and terminology. The ICD-10 will not be that way. It is going to be smaller exam. You have two years to pass it. It’s open book just like the CPC where you get to tab all your manuals. It’s online.

So, when you go and you take your CPC exam you’re going into a proctored environment where you have to use the little bullets and fill the circles. This is going to be online and it’s unproctored. Nobody is going to sit over your shoulder and say “you can’t have this with you” or “you can’t have that,” or “I need to see your driver’s license,” all of that stuff that is required when you go in to a proctored exam. You get to do this on your own and you have two years to pass it. It will measure your understanding of ICD-10 format and the structure groupings and categories of ICD-10 official guidelines and coding concepts.

Are you able to look up and tell what hypertension is? If hypertension is 401.9 in ICD-9, are you able to go and find it and see that it’s I-10 in ICD-10? It’s really not going to be that bad, the navigation which I’ll explain at the end of the slide. Through this – the ICD-10 manual – is exactly the way you work through ICD-9, it’s got an index and it’s got a tabular. The only thing different is that you are going to be using a different code format – meaning, the numbers look different because they’re now characters. They have numbers and letters. That’s the only difference.

Let’s move on. It’s required for AAPC certified coders (excluding CIRCC, CPPM, and CPCO), recommended for all other coders. Again, you have to do it in two years, beginning October 1, 2013 (one year before implementation of ICD-10) and ending September 30, 2015 (one year after implementation).

So, what they’re saying is, when can you take the ICD-10 exam? You can take it 2013, but you have to be certified already to take it. You have to be a CPC or one of the other certification that doesn’t fall on that group that was listed. You have to be a member of the AAPC, the same as always, you go in you get your CPC and then you’re able to go ahead and sit for the ICD-10 portion just like a little upgrade to make sure that you understand the ICD-10 manual and how it’s set up.

One year before implementation of ICD-10 and ending September 30, 2015 (one year after implementation) – In other words, that’s when you won’t have that anymore. If you are not a CPC already and haven’t already taken this, all new people will be testing in ICD-10. That’s what that means.

So what is it, how is it set up? Oh, I said it was two hours – originally it is. That’s 60 questions two hours, now it’s 75 questions, 3.5 hours open-book, online and un-proctored.

Coders will have two (2) attempts just like you did for your CPC exam to pass and it’s going to be $60. So, you have two years to pass it – that means you have two years to take it, so you don’t have to take it just right away. You get two attempts and it only cost $60, and it will only be over ICD-10-CM. It will not cover PCS. It’s only ICD-10-CM and you don’t get any CEUs, unfortunately, for doing that.

Q. Should I wait for ICD-10 to get certified? The answer is no, in my opinion. When we went to conference, they agreed it’s not a good idea to wait. Now, it’s not because we want to sell you ICD-10 training or ICD-9, all that other stuff, but there’s practicality about not waiting.

This I found on this one side which was really good explanation about: Don’t hurry up and wait. So, think of your coding education as a journey rather than focusing on the destination. Go ahead and get trained in ICD-9-CM now – it will not be a waste of time or money. Plus, we really do believe that those coders who know both ICD-9-CM and ICD-10 and can analyze and compare data across both code sets will be hot commodities.

Why is that? First of all, one exception to all the rules is Workman’s compensation. They don’t have to use ICD-10 if they don’t want to, so they’ll probably stay in ICD-9 for a long time because they don’t want to have to pay all that money. But they’re the exception to a rule and how much Worker’s Comp do you deal with. A lot of doctors don’t even take Worker’s Comp, but knowing that there’s somebody out there that can do both code sets will be invaluable to them.

Another example, let’s say you’re working for a doctor’s office and you’ve got a patient who is very ill and they come in every single month and they come in at the end of the month right before they’re changed and you’ve got their billing all went out in ICD-9 and the change happens. I mean, there’s no grace period, it just happens overnight. So, you go check your mail and you’ve got a follow-up that there was an error and it was rejected and you need to make these modifications and they give you “x” amount of days to take care of that. You go in and you do that. If you don’t know ICD-9 and ICD-10 you’re not going to be able to navigate through that patient’s chart when someone is coming in every month, or there’s people that come in every week to get allergy shots and all kinds of stuff. So, you definitely want to be able to deal with both.

If you’re walking in to a doctor’s office say next year and it is February and you want to get a job, and the doctor says, “There’s this big switch to ICD-10, do you know ICD-10?” “Yup, I was trained in ICD-10. I waited to get my certification and I’m trained in ICD-10.” “Okay, good. Do you know ICD-9?” “Nope. I waited and decided since there was a change, I will go ahead and just do ICD-10.” “So, you don’t know anything about ICD-9?” “Well, you know, we covered a little bit, and some of the old books are all in ICD-9, but I specifically trained for ICD-10. I’m prepared for the future. I waited and I’m prepared.”

He’s probably not going to take a second look at you. You’ll go to the bottom of the list because he wants somebody that is trained in both. Let’s say he has numerous claims that need to be fixed, that are backed up or referencing and stuff. And if you don’t know how to do ICD-9, then why would he hire you, over someone that could do both code sets?

So, if you want to make yourself be a hot commodity, you need to do both. There are things that will stay in ICD-9. There will always be audits, and to make yourself invaluable, what if they ask you to go back and go through the 2012 charts because they want to analyze how many patients that they saw that got treatments for diabetes and the treatments that were done. You know, these little soft audits and stuff. Well, you’re not a candidate for that because you only know ICD-10 and you can’t navigate through ICD-9. So, definitely don’t wait. To make yourself as invaluable as possible you want to train in both code sets, if, that is, you want to be invaluable.

Now, there’s going to be plenty of people that are retiring because they don’t want to do ICD-10, which is understandable, and there are several people that said, “Oh!” because you can be a coder, you can’t sit on the chair and even then you can probably prop yourself up and do both. Just keep going. But if you have to learn a new code set and you don’t want to, then fine, go ahead and retire, I guess. But there will be a lot of room for new coders but they’re going to want people that can do both code sets. And then all of those people that were coding, got a job, they’re going to promote them and make them auditors because when you go to change something as big as a code set, can you imagine the learning curve that you have to go through? So, don’t you want somebody who’s already an established coder working in your office, that already knows how everything works, has the experience, and then they don’t have to worry about the learning curve. They’re not just learning, they’re not just good at ICD-10, they have already been coding for awhile and they don’t have to navigate the process. So make yourself as invaluable as possible, don’t wait. And that’s just my opinion and most of the people at the conference of 2000 people.