Q: Disorders of the Eye and Adnexa

A: Adnexa just means an appendage or an extension of an organ. The reason this is really interesting section is because it’s not divided up separately with its old chapter in ICD-9, but in ICD-10. It’s got its own chapter and it’s chapter 7. That’s really fun is that it’s moved up – you know, there’s a lot of information that had to be integrated and there was so much of it that now it’s got its own chapter.

So real quickly it goes from H00-H59 and these are what you can code out of the Disorders of the Eye and Adnexa. You have disorders of eyelid, lacrimal system and the orbit. The lacrimal system of it – I’m going to show you a picture of the eye here in just a second. Disorders of conjunctiva –which is, you know how women put, sometimes they put their eyeliner on the inside ridge of the eye, not just where the eyelashes come out, that’s the conjunctiva. H15-H22 you’ve got disorders of sclera, cornea, iris and ciliary body – that’s all portions of the eye. Then, H25-H28 – disorders of the lens. The lens is a part of the eye and this whole section will be just disorders of the lens, which there could be all kinds of them. H30-H36 – disorders of the choroid and retina. We talked about this when we did our ICD-10 class the other day. I had to go through and looked how to say this because I have problems pronouncing “ch” words when they’re not pronounced “cha.” And it’s not choroid, they’re “koroid,” it’s actually a “k” sound, so it’s “koroid.” H40-H42 – glaucoma; got a huge section on glaucoma. We had talked about that in a previous webinars well that the different things you need to know when you’re going to do glaucoma medical coding. H43-H44 – disorders of vitreous body and globe. That vitreous body is that liquidy part in the eye. H46-H47 – disorders of the optic nerve and visual pathways. The optic nerve goes into the back of the eye; visual pathway – come through the iris and it bounces off the back. H49-H52 – disorders of ocular muscles, binocular movement, accommodation, and refraction. That’s a mouthful. H53-H54 – visual disturbances and blindness. H55-H57 – other disorders of eye and adnexa (extensions of an organ). Then, we have H59 – intraoperative and postprocedural complications and disorders of eye and adnexa, not elsewhere classified. 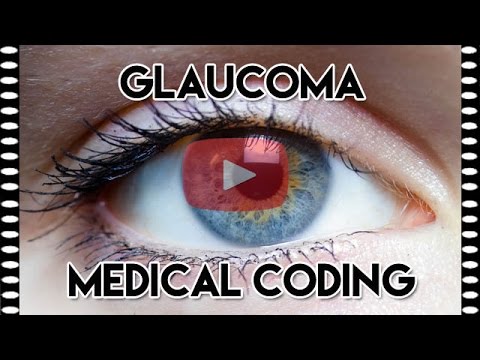 So, the things to know about the new Chapter 7, that if you’re going to be doing a lot of coding here is the structure of the eye; it’s very important that you have a pretty basic understanding of the structure of the eye. So, if you cut the eye in half and you look at it, in the front here, this outside layer of the eye you have the cornea. The sclera is the white part that you see. Then, the ciliary body is actually this little muscle that holds the lens in place and kind of helps the iris. The iris here is the color portion of your eye. So, a person who has brown eyes or blue eyes, that’s all determined by the iris; and iris is what opens and closes the hole, the pupil. Really, when you see the black hole there, it’s looking into the eye and it’s actually just a big hole, and then this iris is what shrinks and when you’re in the dark, it gets real big and lets in more light. When someone shines light in your eye it’s like a pin point. It literally is the window to the brain, so you can tell if somebody, something’s wrong with their brain, if maybe the pupils aren’t equal, or if a person has dilated eyes. Anyway, it’s really interesting.

So, if you know the basic parts of the eye, then you won’t have any problems with Chapter 7. And most of that stuff, you usually already know because you might have learned it in school or the eye is something in science, they always made you draw the eye. At least they always made us; I think they thought it was much easier to draw.