Q: ICD 10 Code for CVA or TIA with No Late Effects (residual or deficit) — “If a physician dictates” and this is another one of those ones that’s a little confusing “that a patient recently had a CVA with no late effects,” or now we would say residual or deficit, sequelae, “what would be the correct ICD-10 code?”

A: I had to think about this, and quite honestly when I went to explain this, I went off on a tangent because I love the disease process, right?

Laureen: You? No never. You’d never go off on a tangent. [Laughs]

Alicia: And then I went back here and I looked it again, and I thought this really is quite a simple question and I’m making it more than it needs to be. So, it is important to note that she states that this question is coming from a rehabilitation facility or aftercare services is what the scenario is coming from and that’s why she’s asking. 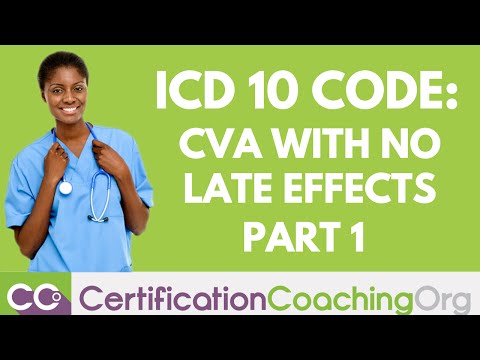 But, for that to work you cannot have any more treatment for that diagnosis. Now, that doesn’t mean you can’t use that and that may not be why the person was sent or it’s going to be staying in this facility. So, what you have to ask yourself is why are they in the facility? Are they in the facility because they had a CVA and they need therapy and so on and so forth? Well, then, personal history is not a good choice, is it? Because they’re getting treatment for that. Can they have a recent CVA with no deficits and still need to be in the facility? Absolutely, there are all kinds of reason. Can it just be one diagnosis in the list of several? Absolutely. So, I am inclined to think that without having more information, just a broad statement like that, it probably is a personal history. But can you code something as a personal history without the doctor documenting that is a personal history? You have to define that; is it defined here? Is it a personal history of a stroke, not otherwise specified without residual deficits or is it unspecified
sequelae, late effect of a CVA.

The thing that gets you here is this comment: Category I69, which is the CVA area, is to be used to indicate conditions between this range, I60-I67, as causes of the sequelae. The ‘sequelae’ include conditions specified as such or as residual which may occur at any time after the onset of the causal condition. Again, I’m inclined to say we’ve got a Z code here, a history code, but without all of the documentation. You really can’t make a clear statement that this is the code.

If we scroll down, I just want to give you a little shot in the arm on CVAs. CVAs are strokes, and ultimately a stroke is just the blood stopped flowing through the brain. Then, the I63 if you look at those codes it’s going to be occlusion and stenosis of cerebral or those precerebral arteries and stuff, all that vascular system that’s going on. I63.9 is a cerebral infarction, unspecified, or stroke not otherwise specified. 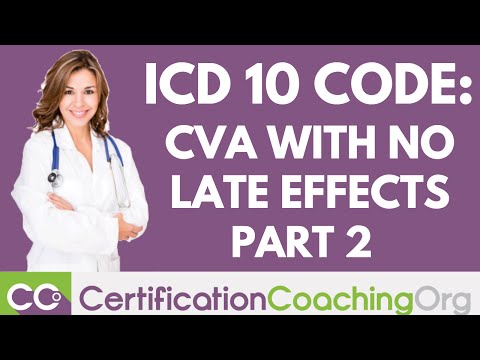 Now, in ICD-10 it is very specific. I even went on and I took it off because I gave you all the list of all of these codes due to this and that, and ultimately is it an embolism? Is it a thrombosis? What part of the vascular system inside the brain, the lining of the brain, all of that in there, but you don’t need to know that to answer this question.

If we scroll down just a little bit more, you do have to determine what type of a stroke occurred? There are two things; it was an ischemic stroke or hemorrhagic stroke? If it was ischemic, then you think it was a clot; if it was hemorrhagic, that means there’s a bleeding. It could be a rupture or it could just a bleed. But, if it is ischemic, then there are two things you need to ask yourself: Is it an embolic? A clot from another part of the body. Or is it like a thrombosis, a clot that forms right there and then blocks off the tissue. All of this is pertinent if you have to code a stroke. Not of the history because there’s history to catch all. But I want you to be very aware of this, “use additional code.”

If you’re going to code an I63 code, then the guidelines tell you because there’s this new treatment called this tPA. What it is they get there soon enough. They can give you this injection of this tPA or this treatment that thins out the blood, and what could be a massive horrible stroke can almost, not be reversed but the residual and late effects could be gone. And so, this is very important; and therefore, they want to know: Was this used? If it was, you better code it because it makes a difference in the
statistics.

What about the TIA, people get CVA and TIA confused. Well, a TIA it’s just a little mini-stroke, what it actually means is it kind of temporary. There’s been a blockage, there’s been a problem with the blood flow but it doesn’t usually let tissue die. We think of heart tissue as dying when a person has a heart attack.

Here we’ve got a little brain attack in the vascular system and it usually can last from like a minute up to 24 hours they said, not usually 24 hours, and sometimes the side effects go away before they even get to the doctor, but it’s still important you need to go. So, that is coded different, that is a G code, G45.9 is kind of a catch all, is a TIA not otherwise specified. Do know that they both can have side effects, residuals. Just summing it up, then that’s the end of the answer sheet. So, ask yourself: Is this the history? And they could have had, just because it says recent doesn’t mean that’s different. That shouldn’t change your way of thinking. You use the information given to you and there are no side effects. And, is that the reason they’re staying at the facility? Maybe they’re just returning after treatment. So, I hope that answers your questions, it was really fun to look into this…

Related ICD 10 Code for CVA with No Late Effects Posts: 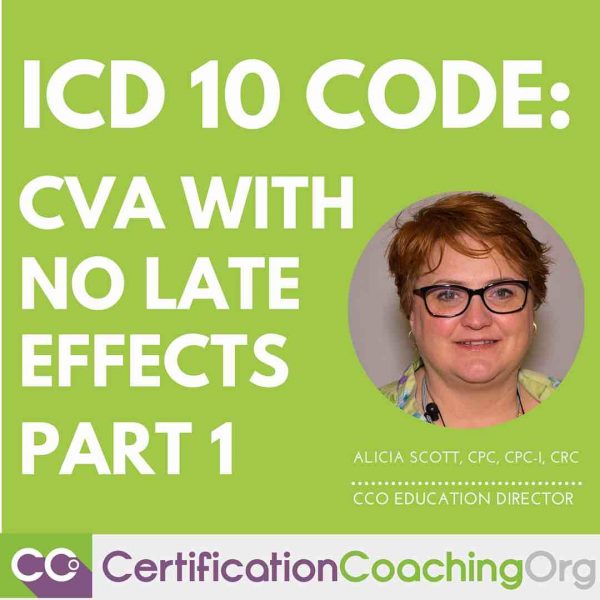