A: Let’s go talk about that, ICD-10-CM 7th Character with Fractures. Now, the one thing that most of you probably already know if you’re working with ICD-10-CM is the fact that you’re able to have up to 7 characters and they’re not called digits like they were with ICD-9 they’re called characters; so the 7th is going to be that last digit. Usually it is to indicate whether it’s an initial encounter or a subsequent encounter or maybe sequela which stands for late effect. But with the fractures, this 7the character – oh, not only tells if it’s an initial encounter or a subsequent encounter it also is going to use a classification system called The Gustilo-Anderson Classification System, and it gives you two vital pieces of information.

One is: what is the likelihood of your patient developing an infection because it’s an open fracture.

Now, if you’re not familiar what the difference between a closed and an open fracture is, an “open” simply means the skin is open; there is an open wound, and most of the time the bone has caused that. It has poke through leaving the door for infection. And because the bones run out throughout your entire body, if you get an infection in the bone and you’ve got blood parts that are made in the bone marrow, it can be a really big time, bad thing real fast. So, it’s something that they take seriously and they are very cautious with. 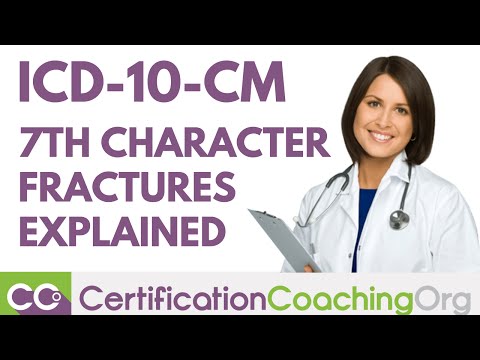 1) What’s the likelihood that this is going to cause an infection? 2) How long is it going to take for that fracture to heal? Now, there’s kind of a standard on fractures. If it’s just a simple fracture, but if it’s a compound or an open fracture chances are you’re looking at pins and things and some surgery to debride or clean that area up, so we could take a little bit longer. It usually means it’s a more severe fracture if it’s actually broken through the skin.

As the grade goes up on this classification system, the infection rate rises dramatically, and lengthens the time for the fracture to heal. Because you know most of the time a person doesn’t have to take antibiotics if they’ve got a fracture, but if you’ve got an open fracture you’re most likely to be on antibiotic.

Grade I open fracture injury, let’s say of the tibia has less than 2% infection rate (with proper treatment), and takes an average of about 4-5 months to heal. But, if you move down to Grade IIIB and IIIC (which I’m going to break this down for you), fractures have up to 50% infection rate and takes an average of 8-9 months for bone healing. That’s a huge difference.

Let’s see what divides these types up: Type I – is simply that the wound is 1 cm. Then, you’ve got type II is 1-10cm. We’re talking centimeters not inches, so keep that in mind. Then, type III A, we have greater than 10 cm, high energy (meaning it was a high energy break, the impact, or however you want to say that) and adequate tissue for coverage. There’s adequate tissue to cover and stitch that all back up for that open wound.

Type IIIB – extensive periosteal stripping and requires free soft tissue transfer. This is much more intense. Then, we have type IIIC – vascular injury requiring vascular repair. Again, you can see why 50% infection rate and it takes 8-9 months for bone healing; a much more severe break, much more complex wound.

Let’s see an example down below. This code here S82.101B, with “B” being our 7th character, is the code that we’ll use for this case: Mrs. Green is brought to the ED with an open fracture of the right lower leg. X-rays revealed tibial break. The patient’s husband stated he saw exposed bone,  then it went away. There is an open wound of 5 cm in length 3 inches distal to the knee. An Orthopedic consult has been ordered.

We’re just worried about the diagnosis not whether its inpatient ER and all this other stuff, we’re just going to talk about the break itself. So, we have an unspecified fracture (because we don’t know what type of a fracture), meaning was it a spiral fracture, was it a compound fracture, was it a greenstick fracture? All of those types of fractures are listed in your ICD-10, not in the ICD-9.

Unspecified fracture of the upper end of right tibia, initial encounter- because this is the first time they came into the ER – for open fracture. And we know it’s an open fracture because the husband stated he saw the bone and then it went back in, which is common for open fractures.  Type I or type II, which had 5 cm, which means that up here when we look at this were between 1 and 10 cm, so it is a number II. And initial encounter, again for open wound fracture, not otherwise specified. This is in little print in your books.

If you go in and look at S82.101 in your tabular, of your ICD-10, you’ll see this fracture. Now, this is not really a good picture of that because this is not a 5 cm wound, but that gives you an idea of what we’re talking here, where that wound is.

The appropriate 7th character is to be added to all codes from category S82. This is S82 because it’s look, S82 right there – unless otherwise indicated. This right here is a breakdown of that category, this is on page… if you have the 2014 ICD-10 draft it’s going to be on page 899. Just note that.

This states: B initial encounter for open fracture type I or II, initial encounter for open fracture NOS. And I just happen to have a document camera, let’s see if I can get that to slide over. I might have to make it small here…. OK, so this is what this looks like, here is our S82 and it tells you fracture of upper end of tibia. We have the right side unspecified fracture – meaning it’s not displaced, it’s nondisplaced, and there’s different types. It is unspecified fracture of upper end of right tibia. We know it is upper end because that was explained. S82.101.

When you look here, look at how many choices you have, and it gets all the way down from initial encounter, subsequent encounter and sequela (meaning: late effect). But you can have subsequent encounter for an open fracture type – then it shows those with malunion (meaning: the bone is not going together well), and then here is nonunion. Nonunion, malunion. OK?

That’s what it looks like in ICD-10 draft. One more thing I wanted to know before we went to the next slide. See this notation? We’ve got S82; we know we’re in the right area: A fracture not indicated as displaced or nondisplaced should be coded as displaced. That is a guideline, you need to know that. You don’t have to have it memorized, you just need to know that if you’re in this area and there’s a note, you better read it. And then the “Includes” and the “Excludes.” Make a point to pay attention to those. OK?

That’s it for that slide. 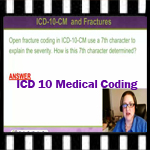