Q: “I’m getting confused trying to code for ALIF in ICD-10-PCS. It seems so different from ICD-9-CM volume 3 codes.”

A: It is very different. First thing we need to know is, what does ALIF stand for? ALIF is an Anterior Lumbar Interbody Fusion Procedure, and so, an additional question that was written similar to this, because when you guys send in the question we try to combine them, so it’s unique that more than one came in, it says: “How do you code an ALIF with a dx of grade 3 annular tear on L5-S1: grade 2 annular tear on L4-L5?”

They were wanting to know also the PCS portion of this, which is the ICD-10-PCS that replaced the volume 3 ICD-9 codes. Let’s talk about the procedure really quick. I actually found some fantastic information from Spine Health. It’s on spinehealth.com and there is a link that you can use from this answer sheet. One of the things that you need to know about ALIF procedures, and again we shortened everything down to an abbreviation because nobody wants to have to say Anterior Lumbar Interbody Fusion, but ultimately what you’re doing is you’re fusing the vertebrae together because it has wear and tear on it, and that cushioning that’s between the vertebrae has worn out, and so they have pain.

Now that we know that that’s what is being done, there are two approaches that are used, and when you’re doing PCS you need to know the approach. And commonly there’s an anterior, or in the front they actually go through the abdominal wall, and go to the spine. They actually move aside the abdominal contents because actually all of your intestines and all those organs are in a sac, so they just bypass that, pull that out to the side, and then they go right into the spine. 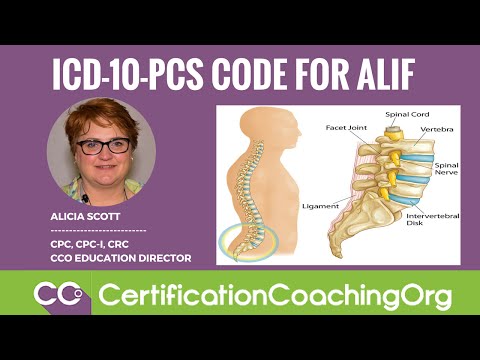 Or they could do a posterior fusion, but really they like to go in from the front because that’s where the damage usually is the front of the vertebrae and then anterior, they’ll go in and theycould put pins and do some other things. I’ve got some more visuals for you, but know that they can do an anterior and posterior fusion, so that’s going to make picking the proper PCS code important.

In the case when there’s not a lot of stability, this is actually a type of degenerative disk disease, so when you’re coding out for regular ICD-10 code that’s probably what you’re dealing with but for the ALIF procedure itself, the first thing is anterior or posterior fusion, or both.

As we scroll down and we know now what the procedure is, let’s break it down because PCS is actually brilliant the way it’s set up. To me, it’s a lot easier to use than volume 3. Once you get the hang of it, PCS is like taking those little wooden blocks that your children played with, with the letters and stuff, and just putting the blocks in order to write a code to tell a story. It’s so much fun.

The first thing you need to know is: What is operation? What is the procedure that’s being done? Well, we’re doing a fusion. When you go to look in the index of the PCS, you’re going to look under fusion, you’re actually going to fuse something together. Then they want to know what body system are you working with? This is considered a joint, a lot of people don’t realize that. Then you have to know if it’s a body system it’s considered a joint. What is it? Well, you have five lumbar vertebrae and then you have five sacral vertebrae, they’re actually fused together, but they count out as five. They start 1, 2, 3, 4, 5 lumbar and then it goes to the sacrum 1, 2, 3, 4, 5, but they’re fused.

That’s important when you go to take care of making the code, putting all the pieces together, not necessarily for PCS; where is L5 or whatever. But asking yourself where you’re at in the joint. Then you need to know if there’s going to be a device used, and there’s usually a device, so three choices of the devices are Interbody Fusion Device, where they actually go in and put a cage, a titanium cage that hold that vertebra in place.

Then they can also take a bone graft from the iliac crest of the pelvis, which is like the heart-shaped part of the pelvis – you need to know the bones of the body if you’re doing coding – so that iliac crest is, how they can tell if it’s a male or female skeleton by the shape. They actually tap in there, pull out part of the pieces of the pelvis and they graft in that substitute tissue to make new bone fusion, and then they also have something that’s not from the body. “Auto” means that it’s coming from your body, and then if it’s not from your body they’re getting it from someplace else.

Here we’re showing the lumbar and sacral joints, I guess you can say part of the vertebra, and you see where the facets are. We’re dealing with this procedure, like I said they’re come in from the front, so see the blue areas which is that it says it’s the intervertebral disk area, and that’s the part that’s deteriorated and being squished. Then the spine, all the nerves and stuff are involved here, but see, where it says the facet of the joint, that’s where you’re getting that these are joints.

This is a picture of the lumbar and the sacral area that we were just talking about. They’re going to come in from the front which would be the blue area that you’re seeing. It was very difficult to find a picture that we could actually get permission to use, but this was absolutely perfect to show you what they do. We know what the basis of our code is, let’s look at how this will be coded, so if you have a PCS manual, and you can keep up with me, you can follow along. The first thing we’re going to be is in section 0 and that’s Medical & Surgical, so think of that as your first little wooden block then they want to know what –

Alicia: Yes, thank you. This is another thing, when you’re dealing with ICD-10 it’s always a good idea to strikethrough 0’s to keep them in shape. Thank you, Chandra. What body system is our next little block and that would be an “S” for lower joint and then the root operation is going to be a fusion, and as you’re looking in the table to fill in these blocks that would be a “G.”

The next portion is to go into more depth of what actual body part are we dealing with? The one that I choose to just simplify everything, Lumbar Vertebral Joints two or more. That’s a “1” but there are other choices that you can use, so we’re going with that one. Then, the approach. It would be open because what they do is they literally open you up, pull everything to the side and go into the spine like we saw in that picture towards the little blue areas, that’s the front of the anterior part of the spine, and then where you see the little knobs that’s the posterior part of the spine.

What I did was I actually pulled out a Find-A-Code from this point. The code that I picked so that we can have an example was 0SG10, that’s where we’re showing right there that we’ve got as our basis of our code. But then we have some other choices that we’ve got to make. This is where the options open up and this is where a lot of the confusion can happen, and as you’re more familiar with the procedures and how the terminology is used and the different ways they do these procedures, this is where this part of the code starts to pop for you.

If we use this 0SG1070 you’ve got a fusion of 2 or more Lumbar Vertebral Joints with this tissue from your own body substitute. Anterior Approach (that means from the front), Anterior Column, Open Approach; that’s the 70. This was again, so much information that I wanted you to get to see, so it’s small.

Just really quickly, look at all of your options though. We go from 70 all the way down to a ZJ, which is fusion of 2-4 lumbar joints post approach. Anyway, you may be able to see it better than I have, I would have to put my glasses back on. See all of the options that they’re giving you here off of this one code. Don’t let this freak you out though because it’s all right there in the manual. What you have to do is just pick the right block piece to go to fill out this code and it’s going to be in your terminology that you find in the procedure itself, in the op report.

Again, when you get to a new base code, like I said before the 70 then you get another list of these. Did I write something else under after that? I think maybe. Then I said, “here is an example,” we were talking about lumbar, but what if they also did part of the sacrum then that would be 0SG as that foundation part of the code with 504Z, which would – again I just pulled this out as one of them there are several options, but here we’re doing a fusion, part of the sacrum, and it’s an internal fixation device open approach. That’s another option that’s given to you.

Its’ very fascinating, it’s a lot of fun to work with PCS, but until you get in there and start doing it, those little blocks can get very confusing. The hardest part though is, by far, figuring out what the first term to look up is, and it’s a fusion for this particular PCS code, and then the blocks all start to fall into place literally for you. This was a fun one. 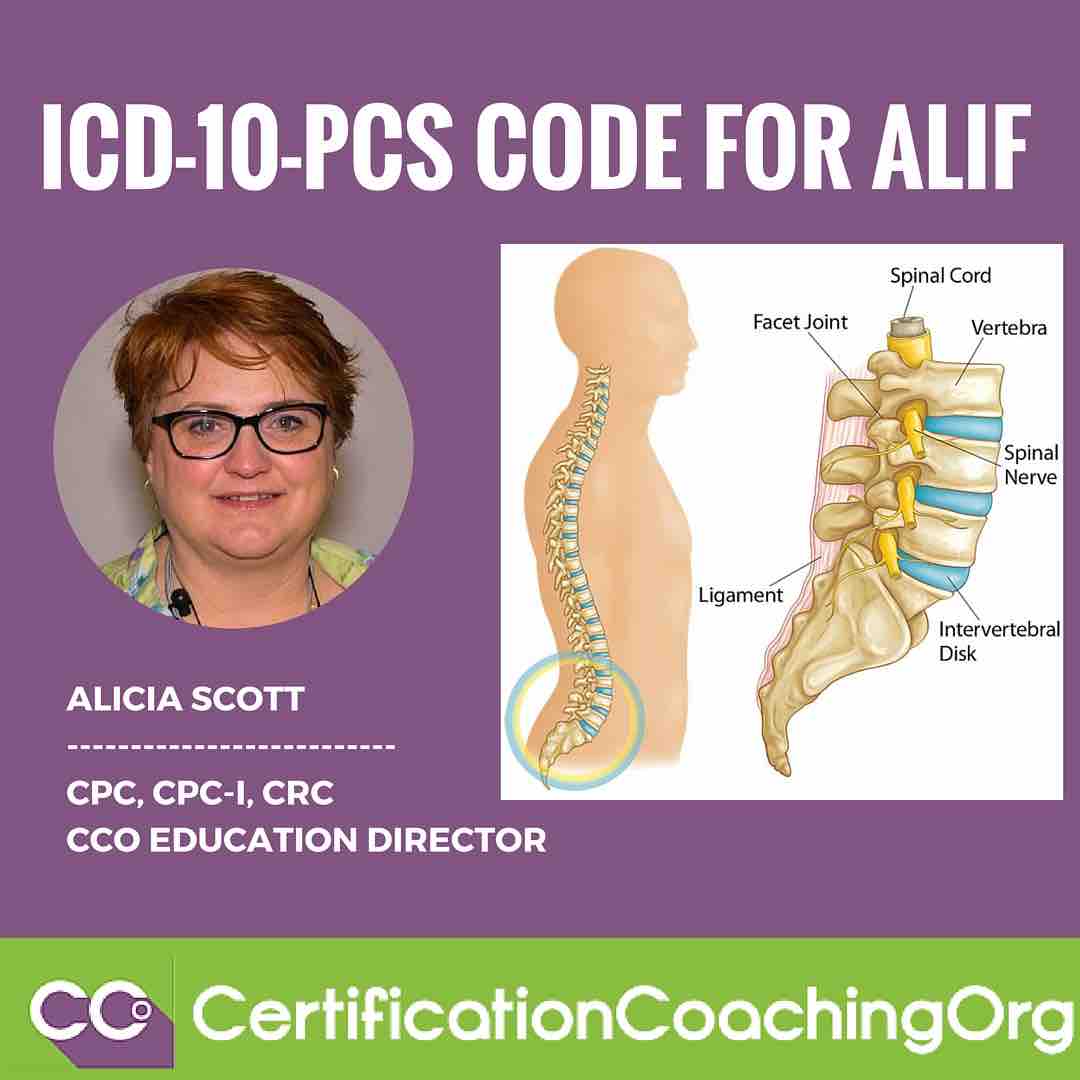