The future of ICD-10. I know that everybody gets really nervous when they hear about ICD 9 to ICD 10. Actually, if you’re a student now, I think it should kind of exciting because you’re right at the beginning of history, I guess, if you could say it. But two things, there’s going to be a lot of people that are coders or have been a coder for a long time. And you know, sometimes, you don’t stop coding until you die because it’s something that you can keep going. Well, ICD-10 is going to change all that. Some people are going to say, “You know what? I think I’ll retire. I don’t want to learn something new.” So for all of you new coders, this is really a great time for you to get in to coding.

But it’s not going to be so scary. When you should start to study for ICD 9 to ICD-10? Is there anything I can do now to get ready or should I wait for everything to switch over? What I would tell you is start getting used to relearning your A&P and your terminology. What ICD-10 actually has done is they… one of the ways they made it easier for the coder is they expanded the description. 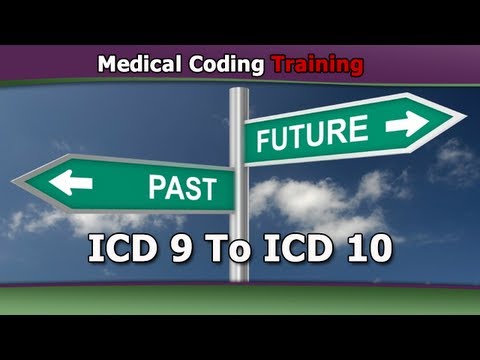 So if you had one code for a procedure, say, a fracture of the femur and so you would say fracture of the femur, open or closed. Well you know, so you would have one… two code choices. Now you’re going to have maybe 4 or 5 or more because they’re going to say fracture of the femur, open or closed, medial, distal… you know the little protrusions or the bones off the little… curves off the top… into the femur that looks like little balls? Those have a name and I can’t remember off the top of my head what they are. But they… if that is… if it’s close to that or that part of the femur is broken, it’s going to be labeled that whereas before, you had two choices, fractured femur open and closed. So your doctor is going to document better or they’ll tell you that where the fracture is and you’ll be able to specifically show where that fracture is with your ICD-10 code.

Another thing that they’ve added that’s going to really nice for the coders is that you’re going to have prefixes and suffixes on ICD-10. So you’ll be able to tell whether it is a subsequent or an initial visit. These are just little things that you’ll learn as you’re learning ICD-10 but it’s not going to be scary. So I don’t want you to worry about that. What do you need to do now? You need to start learning your anatomy and physiology and make sure that that terminology is really good
because it will play a big part of ICD-10.

That second question, I want to know what are my options for learning ICD-10? That does not require going to college. Well, you don’t have to go to college to be a coder which is kind of a great job to have for not having a degree, if you choose to go that way. You can make real good money but college does, of course, help you sometimes. They give you the anatomy and the physiology and stuff like that included. But there’s courses and like what we have here at CCO that you can actually learn ICD-10. There’s some books out there that you can get, that you can learn on your own if you’re already a coder. That might help you if you’re diligent enough to do it on your own. If you’re not, you know, take a course. But you don’t have to go to college to learn how to do ICD-10.

Do you think people can self-teach for themselves? Again, yes you can but there’s several helpful things out there on the web that if you really want to know the answer now, I would plan on taking a course. You don’t have to go to college but you need to take a course.

Once people learn about ICD-10, do they have to retake any medical coding certification exams with AHIMA or the AAPC? Yes, you do. With the AAPC, if you are an ICD… if you’re certified in ICD-9, when it switches over in October of 2014, you have 2 years to take another exam which, I think, off the top of my head, I think it’s 60 questions and it’s online. It’s not very expensive. I don’t know, I can’t remember again. I think it’s like $60 to take that. There’s a link Laureen’s putting up now. It’s at the bottom. It tells you, to the very bottom of that page, that was the link. It’s a very long page too that will tell you what AHIMA requires. Oh excuse me, no. This is the AAPC, what they require. And again, it’s not really going to be intimidating at all for you.

I would suggest though, if you’re thinking about getting certified, do it before ICD-10 because everybody’s going to be nervous and just get it out of the way. I think it’s a little further down.

Boyd: And there’s no other questions before that, is that correct?

Alicia: Correct. It’ll be… there’s no grandfathering in of the exams. If you sign up for it and you plan to test on October 14th 2014, it will be ICD-10. The month before that, it’ll be ICD-9. There’s you know… let’s see, there you go, those bullets on the bottom. It states: required for the AAPC… now this is a suggestion. This is what they’re saying that they would like for you to have. Two years to take and pass the assessment beginning October and that’s supposed to say 2014. So that means you have 2 years to take this little test that they’re going to give you to make sure that you are qualified to do ICD-10. There are 75 questions. It’s open book, online and unproctored. So you can be at work if your work will let you do that. You get your books up, you go in, you take a 75-question test. Coders will have 2 attempts, just like AAPC usually gives, of passing this for a $60 administration fee. That probably has something to do with the online. ICD-10 only will not… once you get the ICD-10 PCF which is procedural coding. That’s more for inpatient coders. That is… that’s not covered. It’s only ICD-10 CM, clinical modifications. And you do not get CEUs for taking this test.

Now with AHIMA, I looked, I couldn’t find a good screen to show you. But from what I understand with AHIMA, they’re going to have you do CEUs to qualify. So you’ll have to take the CEU course and then in most CEU courses, they have an exam and you take the exam. And you have to go through so many of these courses before you get transferred in to ICD-10, for your certification. 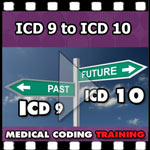 So again, it’s not scary. It’s not…you know, it’s going to be easy. There’s going to be lots of courses. Laureen’s going to give a little mini-course for people who are already certified. And then of course, we’ll switch over to ICD-10 when the time comes with our textbook. Also, keep in mind that the books that we use now for the step by step with Carol Buck, it has… I think, 4 or 5 chapters in ICD-10 already. So it’s you know, if you’re already taking the course or you’re planning on taking the course that Laureen offers right now, the books that you have will get you prepped for ICD-10 gets you familiar with the way it gets set up and work on the poll. There you go, how many would be interested in a mini-course for ICD-10?

Laureen: We’ll be doing a full course eventually. That’s probably going to be more geared toward those preparing for the… like the CSS, like the inpatient because as you know, ICD is very important to inpatient coders. But what we need for physician-based coders is something not so comprehensive but yet not just like a 90-minute you know, deal. So I figured, it’ll probably be the length of how our medical terminology course is, about 40 hours. Did they all answer? Well….

Laureen: So 96% said, “Heck yeah!” Okay so we’ll get to work on that right away. So we just finished…

Alicia: We aim to please.

Laureen: We just finished our medical terminology recording so we’ll get working on that. So I appreciate the enthusiasm over that especially when there’s a gazillion people out there teaching ICD-10.