Alicia: Okay, Rahul had asked a question about an ICD code for pregnancy– twin pregnancy. It’s not really covered in detail on the Blitz videos but he wanted a little more guidance on it and says, “Can you please guide about pertaining to delivery and modifiers?”

So what we worked up here, let’s see. Okay, we had gotten some information from the forum. This has actually come in on the forum and someone had posted… I don’t think we posted their name but it was really excellent advice. On the twin delivery deal, she says, “I had… I think I have experience on that. Depends on your insurance carrier.” And that is very true because what you’re dealing with in the real world isn’t necessarily the same thing that you deal with when you’re testing. So keep that in mind for you coders who are you know, already coders that are going to get certified. Don’t think about what Blue Cross Blue Shield wants. Think about what the guidelines tell you. 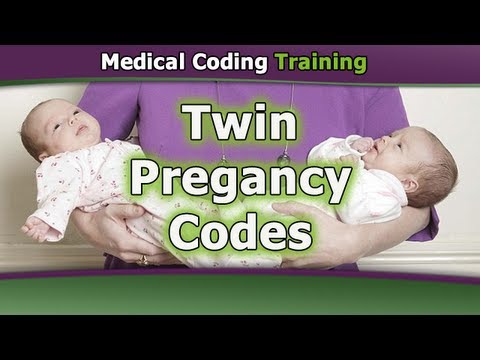 She said she bills 59400 for the global and post partum care for vaginal delivery, 59510 for C section and then a 59409 delivery only or 59514 for C section only. This modifier 59 for the twin, now that’s important. I’ll cover some of that in just a second.

Think about if you had a mom in labor and delivered the first vaginally but maybe the second one is breech and then they did an emergency C section. You can’t put a 22 on that, a modifier 22. If you saw the patient for ultrasounds and billed them out, you don’t put a modifier 22 on them. It’s all incorporated in there. You would bill one sonogram normally like 76815 and then the same sonogram with a modifier 59 for the second baby. At least that’s what she’s saying that she would do.

And of course, any time you do anything that’s unusual like that, you need to check with the insurance company and make sure that’s what they want you to do because they’ll just… they’ll deny you. And people who like the billing aspect of coding, you’re talking to the insurance companies quite a bit.

Let’s scroll down, okay. Let’s see, so she’s saying for the extra modifier 22 for delivery, the second twin… but that is something you’d have to know prior to billing. And you can always appeal. She likes OB but it’s tricky. And that’s exactly the point here. It is tricky.

What you need to keep in mind is that you’re not only dealing with the insurance carriers but you’re also dealing with statistics. And a lot of times, coders forget that. There’s three things that you want to do when you’re dealing with pregnancy coding, 3 questions to ask yourself: how many babies were born? Normally, you’re going to have one. In this case, you have two. How was the delivery done? Was it done via C section or was it a vaginal delivery? And what was the outcome? Live born. That’s the terminology that you will use.

Okay, scroll down a little bit. I think… Okay now if you’re going to do ICD 9, you’ve got a twin delivery, it’s going to be 6510 and the x are just there to indicate there’s a subclassification. You just need to pick the correct subclassification code and live born, V27.2. Okay now, the scenario, you can do any scenario this way. But in its most basic form, you’ve got twins born via vag delivery, both live born with no complications, 59400, 59409 modifier 52, 651.00 V27.2. It just… all of those codes just told that story. Twins were born via vag delivery, both were live born, no complications. If there’s complications, that’s just more codes that you tag on to the end whether it was you know, a breech baby or something like that. But it’s kind of fun because you just literally tell a story with the codes when it comes to deliveries. 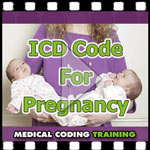