Laureen: This question is Immunotherapy Injection Sequencing. A student asked us about this scenario. Actually, I don’t know if it was a student or actually might just be someone on our discussion board who needed some coding help

Scenario: The patient comes in for immunotherapy injections – basically it’s allergy shots. The code when they are giving multiple shots is 95117 and they have a diagnosis of 477.8 and has an allergic reaction which is a code 995.0. The physician is called in because they had a reaction. Normally, they come in for allergy shots and they’re fine, but they come to the office in case they’re going to have a reaction. In this case, the patient did. They had to call the physician in and therefore an E/M service was provided.

Q: Would the order be the E/M first with the principal diagnosis 995.0 or the reason for the encounter which was the injection with the code 95117?

Let’s see how I work this one up. By the way, we do this what we call answer sheets so that we can give you a lot of information and screenshots and graphics and things like that and then this is what you get as a Replay Club member. It’s $19.95 a month. You get access to all of these Q&A webinars that have been recorded for the past couple of years and saved in the Replay Club area, so you get all these answer sheets. On the live webinar which is free, you get to see them. We give you as many links to websites and stuffs as we can, but if you want the full package, then you want to be a replay clubber.

A: My first thing was the diagnosis tip. The question was said, “Would the order be the E/M first with the principal diagnosis…” I just used this as a teachable moment that when we’re in the physician or outpatient world, we should refer to the first diagnosis as “first listed.” In inpatient world, they call it “principal.” The bottom-line, it’s just, “which one goes first,” is really what we’re saying. But principal has a very special meaning for inpatient coding. Won’t go into it now but just be aware of that little nuance of difference there.

The general rule of thumb is it’s always best to sequence your CPT codes by the highest value of one first. That would be using the RVU scale. Most of your encoders or tools that you input codes to will sequence it for you, but it’s good to understand how and why they’re doing it. Every CPT code has a value. They factor in the risks involved for the procedure, how much skill is required for the procedure, how much equipment or overhead is needed to do the procedure. So, they have these committees and they all compare every procedure to other ones to come up with a relative value for that procedure. 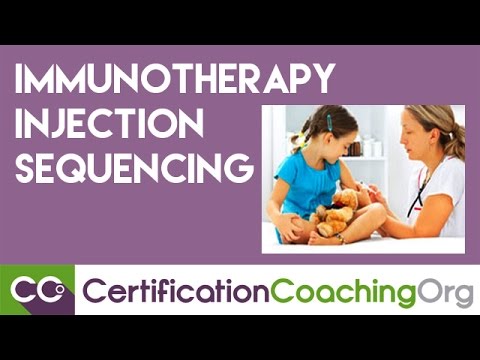 It mostly matters when you have multiple surgeries, because there is going to be reduction on subsequent surgeries. The first one, they’ll pay at 100% of the fee schedule but the subsequent ones get paid at 50%. Of course, you want the highest paying one to be listed first. In this case, when you have an E/M with another procedure, it doesn’t matter as much unless you’ve gotten some directive from the payer, but in my experience with E/M and other codes it doesn’t matter. What does matter is that you need to make sure if the procedure – in this case it was the 95117, the allergy shots – if you reported an E/M with that, the payer is going to think that you’re reporting the mini E/M that’s built into this code and you’re double dipping, and they’ll deny it. You have to put modifier -25 and modifier -25 means significant and separate E/M. In this case, because the physician had to be called in because the patient was having a reaction, that was a significant and separate evaluation and management that he or she had to provide in addition to the shots.

The next step would be to link the CPT code with the diagnosis that supports it. We love Find-A-Code,and in my world as an instructor and a consultant I don’t do a whole lot of heads down coding or billing, so it’s fun once in a while to play with these tools that for you folks out there in the real world of coding probably would get to use on a day-to-day basis. They have this thing called the Claim Scrubber. Find-A-Code is normally used an electronic CPT book and ICD book but it’s got a lot more features.

What this is, is you’re basically taking a claim that if you had a real patient come to the office, so I recommend doing this to see if you’ve got any problems with the claim linkages, is the diagnosis not supporting the procedure? You come here, you enter your zip code because there’s going to be differences based on your zip code. If you have a special claim ID, you could put that in. I’ll just put 003. This is where you put your diagnoses codes.

In our example, we had mentioned 447.8 which was the allergic rhinitis and the 995.0. The question actually give me 0.49 but it didn’t come up as a valid code, so I used .0 for illustration purposes. The patient’s gender – we’ll make a male, the date. These are our two diagnoses and now we’re going to come down on a universal 1500 form. You’re going to have six lines for procedure. That’s what they mean by line one.

We’re going to put in our first procedure which was the 95117, those were the two shots and this is where you’re going to: “Do I need a modifier?” No. “What diagnosis of the two I put above supports this?” That was the allergic rhinitis. So, I’m going to pick that. I’m going to add a new line, because I have two procedures – the E/M and the shots – and I’m going to come in here… By the way, we’ve got to pick place of service so we’re going to do this in the office and procedure code for this… I just picked E/M code 99214.

This is where I’m advising you to put modifier-25 on to tell the story that this E/M is significant and separate from the two shots. What diagnosis do you want to go with this one? It’s going to be the reaction that happened. In some cases, you could have both diagnoses codes support each procedure, but in this case that isn’t the story that we’re trying to tell. Then, we come down here and it’s called “Scrub this Claim!”

Now, I can see here, there’s no known issues detected at the claim level. Line one – the procedure, 95117 with the diagnosis 447.8 – there’re no issues. It’s a valid medical necessity. It’s kind of a cool little tool to scrub your claims.

Boyd: Should the units have been changed to two?

Boyd: There was a question there.

Boyd: Because you’ve got…

Laureen: I thought you were getting a… you were asking a question. [Laughter]

Boyd: There was question there in chat about that.

Laureen: No, because there was only one unit of 95117 and I’m actually going to be answering another question regarding allergy shots, but that just happens to be one where the CPT description says, “Two or more shots,” that’s why you only need one unit. 95115 is when you only give them one shot. Good question. Of course, there was only one E/M visit done, so you only have a unit of one.

I was going to say, “Boyd, you’ve been hanging around with us so much, you’re asking questions about coding” [Laughs ]. Hopefully, that helps with the question and gives you a little peek in the Find-A-Code feature.

Get More Details About