This is something I knew nothing about so I love doing these webinars because we learn so much ourselves and really the best way to learn is to try and teach it. So, anytime that you have a coding question that you’re trying to come up with, think about if someone asked you to present at a local AAPC chapter, how would you go and start collecting the information?

While Alicia is opening up my answer sheet,just to let everyone know we use Google apps for everything so this is all Google slide presentation. It allows us to collaborative and work together. What we do is we create what we call answer sheets, so you’ll see a lot of times where it says “answer” and we click on it and it opens a full page, that’s where we really provide a lot of notes and trying to show you how we came up with the answer instead of just giving it to you and it’s a resource you can go back to if you’re in our Replay Club.

This particular webinar we offer for free, but if you want the answer sheets, then that’s part of the Replay Club, which is only $19.95 a month. You get access to all the previous ones that we’ve done. I think we go back two years now and the most recent ones about the most recent 9 to 12 have CEUS available as well. So, for 20 bucks, you could get in and take a bunch of CEU quizzes after listening to the presentation and cancel your membership and get a lot of CEUs. Not that we’re wanting you to cancel, I’m just letting you know it’s a very good value.

A lot of people were asking in the chat, can I get the handout? We will eventually share the slide deck through Slide Share normally a couple of weeks after, but it won’t have the answer sheets; so it’s just something to keep in mind. We try and give you the links and stuff like that. 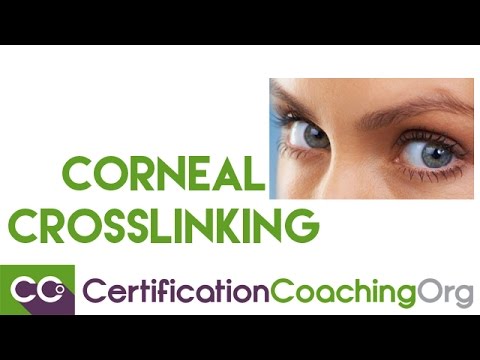 A:  The first thing we had to figure out is what is it? What is corneal crosslinking? The best resource I’ve found was from the Cleveland Eye Clinic. They said that: Corneal collagen cross-linking is a technique that was first used in 1998 to treat patients with a disease called keratoconus. In keratoconus, the cornea, you can see this picture here, the one on the left is a normal cornea. Nice and rounded shape. The one on the right is where the cornea gets real thin and it bulges out into almost like a pointed cone shape, which blurs the vision. That’s the condition called keratoconus.

Normal corneas have this little cross-link fibers, collagen fibers that keep it strong and keep its shape, but in this keratoconus, it loses that and it’s too weak. The weakened structure allows that cornea to bulge. What I underlined here: The cross-linking procedure adds cross-links or “cross beams” to the cornea, making it more stable, helping it hold its shape and focusing power better.

Apparently, it’s a pretty popular procedure because it’s not invasive. Regarding how to code it, it’s still considered investigational, so many insurance companies they simply aren’t covering it yet; so your best choice is to use the unlisted code and that’s 92499 – unlisted ophthalmological service or procedure. You can try and get paid; chances are you might not until it starts getting more recognized.

Here are some common diagnoses that I found on a payer’s website that I just decided to copy and paste into the answer sheet, and they give you ICD-9 and ICD-10. We can see that keratoconus, the 371.60 – 371.62.

Scroll down a little bit further, I wanted to share some resources. There’s one specially, I was going to try and play the video. That second link, if you could click on that Alicia, really good videos, and Alicia is a big one for finding and sharing videos; but this one really explained it very well. You won’t be able to hear the sound but maybe if you could play it, it’s really a great visual of how this works. It shows like what they’re actually doing is putting these drops on the eye, they get absorbed into the area where there’s the cross links and actually creates cross links. It’s just from these drops and then you’re done. That’s the video there.

[Video playing – 1:08:22 – 1:10:30] …“that maintains the cornea’s shape. Certain conditions like keratoconus can weaken the links between these corneal fibers and alter the cornea’s shape. This leads to distorted vision that worsens over time. Glasses, contact lenses, and corrective corneal implants are used to compensate for this. But the problem can progress to that point, but the cornea must be implanted to restore useful vision.

Corneal transplant is an invasive procedure requiring a lengthy recovery period, lost time from work, and carries a high risk of postoperative complications. Even if successful, the quality of life for corneal transplant recipients is significantly impacted and often requires down to make permanent lifestyle changes.

Today, a procedure known as UV cross-linking is a simple, minimally invasive treatment that can stop the progression of keratoconus and similar conditions. While cross-linking cannot reverse the distortion of the cornea, it can prevent further changes. Studies have shown that cross-linking preserves vision and avoids the need for a corneal transplant. The cross-linking procedure begins by administering drops of riboflavin solution. Once the cornea has been saturated with the solution, a small amount of UV-A light activates the riboflavin to strengthen and stabilize the weakened links between the corneal fibers. Most patients will not require more than a single treatment. If you or someone you care about suffered from keratoconus or similar condition…”

That’s good, you can pause it now.

I just thought that was a really excellent video, although I think the way that we teach are a little bit more fun to listen to [laughs]. But the image was so clear, of course it was just that clean to make a cut like that, take it off put it back; but the point is, is that it’s an alternative to going all the way to doing the transplant. But, it’s just not covered yet by a lot of payers, so use that unlisted code. Probably the next step is they’re going to come up with the category 3 code where it will be a temporary code that you’re going to use instead of the unlisted, see how many people are using it and then it will hopefully get a permanent code in CPT.

Those are bunch of references there; the last one was from Anthem.It’s just a sample policy where they described that. So, part of our philosophy is teaching you how to fish so I use Google and I’d literally type in “corneal crosslinking” started exploring the links, found the site on Anthem, they explained all about it. So, you really can be your own consultant and figure out answers to things like this. I’m going to show you on the next question on how to do special searches, I’ve shown it before, but it bears repeating because it’s very, very helpful.