Alicia: Now we’re getting into burns, and this is a change that’s in 2014 CPT. They aren’t doing the burns like they did before, so this has really thrown some people but it’s not that hard. Let’s go in and look at the burns. Once I think we explained it, we won’t have to spend much time on this because it’s not as hard as you think.

Q: I need some help with 2014 CPT book new code like burn (how many % body area burn that, because old book is % new book table, so how to use it?) 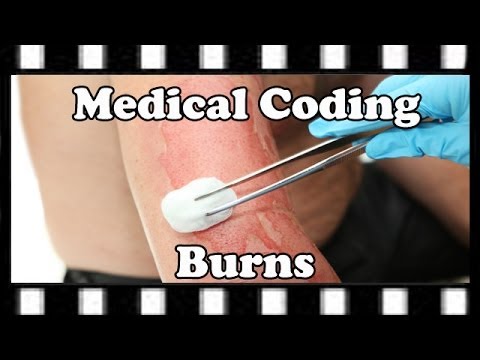 A: That didn’t make sense when I read that to myself. Actually I’ve got the manual, the CPT 2014 professional manual and it’s on page 86, so you can either turn to that and see what the new grid looks like. This is the closest one I could find off the internet. This is called the Lund-Browder Diagram. This is what they use versus rule of nines or in association with rule of nines. Of course we’ve always used the rule of nines before, and by the most part a lot of people get that memorized and that works great for an adult, and then they had rule of nines for an infant because of course an infant’s head is not the same size as an adult’s head as far as percentage of the body.

What Lund-Browder did was they came up with a graph that said not only is an infant different than an adult, but as they grow their percentages change, their body parts change. And you can get an advanced copy — I guess call it “advanced” – but this actually has mapping for a person that’s an adult or an obese adult, because if you think about it, they have a bigger body surface area than a standard adult.

What they’ve done is they’ve divided this up into age groups and body parts but they’ve also divided the body parts, when rule of nines you had one leg that would be 18, we’ll now you’ve got upper and lower leg as you can see in this graph here. Then, you can also see the difference between the head of a “0 to 1 year old” gets a percentage of 19, whereas an adult gets 7, and then that continues down. It’s just more specific, that’s all it is guys, more specificity which in turn allows them to do a better job.

What you need to know is this TBSA – and that’s how the ICD-10 book divides that up is total body surface area. You have a whole section of burns that are from corrosion, several pages, and then you have burns that are not from corrosion, that would be like from a flame or something. They are concerned about the total body surface area that’s burned and it’s all done in the percentages of this. Not as bad. Oh, those burns are on T31-T32. That actually encompasses several pages, this is the basic broken down, there’re more characters. So, it’s exciting, new and more in-depth. 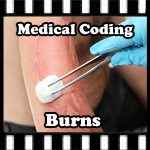