Did you get that, Boyd?

Boyd: Yeah, I did! Very clear.

Laureen: I can see why this is so confusing. Let’s look at the answer sheet here.

Boyd: It helps when people see you talking actually when you do this, I was just thinking.

Laureen: She went to say: “This concept really troubles me. I used to think that the two terms (late effect and residual effect) are the same things.” – They are, so you are correct. I’ll explain why they stated the way they did. “However, it seems to me that there’s one specific code for the residual effect and another code for the late effect. Could you provide me an example?” 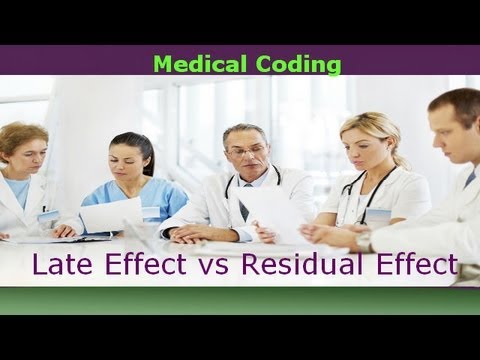 A:  This is how when I’m teaching this, think “cause and effect” and then replace the word “cause” and the word “effect” with other ways to describe the same thing. “Cause” you could say “etiology” underlying condition. Then for “effect,” it could be late effect or residual effect. It’s the effect that the cause created, if you will. Then, “manifestation” is also a way to describe a late effect or residual effect.

Now, that we understand, let’s just talk about like when you have a stroke – so that’s a cause. An effect of a stroke could be hemiplegia. It could be dsyphagia (trouble swallowing), dysphasia (trouble speaking). That’s a cause and effect situation.

Now, in ICD, we want to be led by the guidelines and the guidelines will tell us sometimes there are combo codes. One code that tells that cause and effect story; other times, we need two codes to tell the story. We need a code for the cause and a code for the effect. So, the effect we were just talking about with the stroke, let’s just say it is two codes. The effect could be the hemiplegia, but the cause is the stroke.

So, when they said the sentence, “The residual effect is coded first and is followed by the late effect to show the cause.” When they say late effect, it’s either a typo and they meant to say etiology. Or they meant, they’re referring to the actual ICD code. When you go to the index and you look up “late” in the index and then “effect of” and it points to all of these codes – I’m going to show you that in a minute – that’s what I think they’re talking about.

So, I gave you a little reference here for those that are in the Replay Club and they want to see the Official Guidelines. So, for ICD-9-CM it’s Section 1.A.6. For ICD-10-CM, it’s Section 1.A.13 where they talked about this etiology/manifestation convention.

But, here’s a little clip I took from SuperCoder, from the ICD Index and I love this feature. So, if you’re a subscriber to SuperCoder, if you got to CodingCertification.Org/Supercoder you can get a discount. You can actually use this is as a real coding manual, which I love especially since I didn’t feel like getting out this page and scanning it in or getting out my document camera.

So, I went to “L” and I’m going to down to “late”. What’s nice about this, unlike the paper manual is you don’t have these ways to expand and collapse but in the computer one we can, so we’re going to expand the plus sign next to “late” and now we see “late effect(s)” up. I’m going to expand that and then let’s just look at “burn” and we can see here we have eye. So, if it’s a late effect of a burn of the eye we’re going to code 906.5. The actual code description if you to turn to it in the paper book it is late effect of burn of eye, face, head, and neck.

Now, it also says late effect of injury classifiable to the category range 940-941. This is the code range we would use if it was a current burn or a fresh burn, if you will. So the code 906.5 is the late effect code even though this is really the cause. See where it got confusing? It’s not the late effect of whatever is wrong with the eye. Or let’s go back to our stroke example, it’s not the hemiplegia code, it’s saying it is late effect of stroke. This is late effect to the burn to the eye maybe some scleral scarring or something like that. So, the residual would be the scleral scarring, but the cause would be this late effect code burn of eye, okay? This is in the answer sheet so you can refer back to it, so basically this is what I just said verbally. Sometimes when you hear “late effect code” it is really the cause or the underlying condition, but in ICD it’s called the “late effect code” because how we look it up in the index and what it says in the description – late effect, burn to eye. So, hopefully, that will help clarify that for you. Indeed, residual and late effect does mean the same thing. And things are going to be a little bit different with ICD-10 but not too bad with it.

I learned this in my ICD training a few weeks ago the instructor said “Teach your students to be obedient coders.” I like that; that stuck with me. So, we want to be obedient to what – especially with ICD, what it tells us to do. If it tells us “see” like, we’re in the index and says “see” and go somewhere else, do it. Don’t go “Maybe I will, maybe I won’t.” Follow the instructions. When you confirm what code in the tabular, read all the instructions and be led by them, and things will go well for you especially when it comes with this manifestation coding. Sometimes there comes a code, sometimes you need to tell the story. 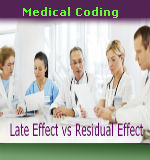