A: This one, Ruth Sheets who’s on the CCO team prepared for us, so thank you Ruth, and she did a great job. She gives really good visual aids and for those who have been following CCO for a while you know we’re visual teachers and learners, and so this falls right in line with it.

For this, let’s start with some key terms, and the beginning of your Path & Lab manual were these codes come they used to be a small little section, and now it’s pages and pages long, and it could be very overwhelming, but once you can get the terminology down and you understand how it’s divided up, it really isn’t as bad as it seems.

First of all, what is an Assay? It’s an analysis to determine the presence or the absence, or quantity of one or more components. Sometimes, they’re just looking to see, is it present in the person’s body, or they might want to know exactly how much is in the patient’s body.

The next two terms Quantitative and Qualitative, you’ll see a lot in the pathology section. 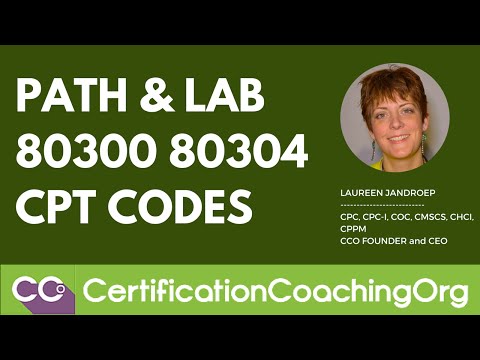 The next term that we wanted to find is the word presumptive, so that means you’re looking to identify the possible use or nonuse of a drug. That was a change in 2015. The CPT manual used to just say Qualitative for that, now they say Presumptive, and that’s what it means. They’re presuming there might be some drug use, and they’re going to go in and try through testing, and to figure out if that’s true. Whereas, definitive is they’re looking to identify an individual drug specifically to distinguish between structural isomers but not necessarily stereo isomers, so real techie there.

Drug Class, this is important and to understand because the CPT codes are divided by drug class. It’s a grouping of chemically related drugs. An example here is barbiturates. You’re going to have a lot of different types of barbiturates and they can be tested using similar method, so that would be in one drug class. CPT has determined two distinctive lists and technically three, two that are distinctive and one that’s a catch-all for everything else.

Drug Class List A are going to be things like alcohol, barbiturates, cocaine, opiates, etc. and you can say a whole long list on page 493 of your CPT Professional version.

Drug Class B, which is a little more complicated are your acetaminophen, nicotine/cotinine, salicylate, tramadol, etc. Again, that list is on page 493 of your CPT manual as well.

The reason for the division is that just like other things in CPT some things are more expensive than others, so there’s more work involved than others. The note here says, “It typically takes less resources to identify the drugs in Class List A than it does in Class List B.”

We want to talk about the general types of Assays. A Therapeutic Drug Assay, just like in other parts of CPT, therapeutic is more of the fixing type of thing; so the person is already on a drug, or something, so they’re monitoring a clinical response to a prescribed medication. Those are reported with CPT codes 80150 through 80299.

The Presumptive Drug Class Drug Assay is to identify possible use or nonuse of a drug, or drug class, and that’s that range 80300 to 80304, and so your co-choice in that range is going to depend on that first bullet there, what drugs you’re looking for, is it a Class A, or Class B, or is it fall in the other category? Then, second, the methodology of the test being used, so those are things that as a coder you want to pull out of the documentation to be able to code.

Really follow the instructions in your Path & Lab section for those to code it correctly. There are some specifics and we’ve got a little chart at the end that Ruth did that I’ll share with you.

Definitive Drug Testing to identify the individual drugs. This is where we’re really getting down very specific, what is that drug in the blood stream, or the urine, or whatever, and distinguish between the arrangement of the atoms in those. Those tests are very precise and they’re represented by CPT codes 80320 to 80377 and the note here is that presumptive drug class assays are often followed by a definitive.

The first thing, is it present, test is going to be done, then maybe they found the person unconscious with an empty bottle of pills, or whatever, and they presumed that it’s in it, yup it’s there. Now, they’re going to do a definitive and be more precise on the exact type or the quantity of it; and so, therefore, if you do both per CPT you’re allowed to report both.

Here is the lovely chart that Ruth did for us. The way this works, it’s like a decision tree, so start, the question is, is it a presumptive drug screen? I love how it says “No. Stop, this chart won’t help you.” A little CCO humor there. Yes, then you’re going to scroll down a little bit and we want to figure out what the drug class is, and we just reviewed that there’s two definitive types, or two – I probably shouldn’t use definitive since that’s one of the definitions here.

There’s two clear types A or B, and then there’s a catch-all, everything else. If its Class List A, that’s the first screen box there, we’re going to go over, and ask ourselves the question, is it non-TLC, capable of direct optical observation, yes or no? If yes, you go to the right you’re going to code the 80300 for any number of drug classes per date of service.

These are the methods, what’s the method here? If it’s yes, if the answer is yes to that then you’re going to code it as an 80301. If the answer is no, it’s not otherwise specified, presumptive procedure, very good. The second green box, if it’s not class B, if its class B then our first question is, by immunoassay or non-TLC chromatography without mass spectrometry. If the answer is yes to that question, then we’re going to code it as 80302 for each single drug class procedure.

Isn’t that a great chart? I love that, so kudos to Ruth for putting that together for us. Also she didn’t stop there; she gave us a little table to help us to understand for each of the classes, Presumptive Testing for Class List A. We want to ask ourselves if the methodology is: Non-TLC devices or procedures, and capable of being read by direct optical observation then we code it 80300. How many times? Once per date of service. It doesn’t matter how many drug classes.

For class B, if the methodology is by immunoassay or non-TLC chromatography without mass spectrometry you’re going to code it 80302. How many times, once for each single drug class procedure and they have to be from drug class B. If the methodology is TLC procedure for single or multiple then you’re going to report it as 80303, and that one is once per date of service, and that’s no matter how many drug classes.

Finally, presumptive testing for any number of drug classes. If the methodology is TLC procedure for single or multiple, it’s going to be 80303. How many times? Once per date of service no matter how many drug classes; and then all that other methodology, all those different ways of testing stuff would be an 80304, and you report that once per procedure.

This answer sheet is available to our Replay Club members. I gave you access to the chart but if you want the whole kit and caboodle that’s part of the benefit of joining the Replay Club $19.95 per month, it’s a real bargain, and those are just extra resources on this. You could go look up if you really needed to know more about it. I think that really put it together very well, so thank you Ruth. 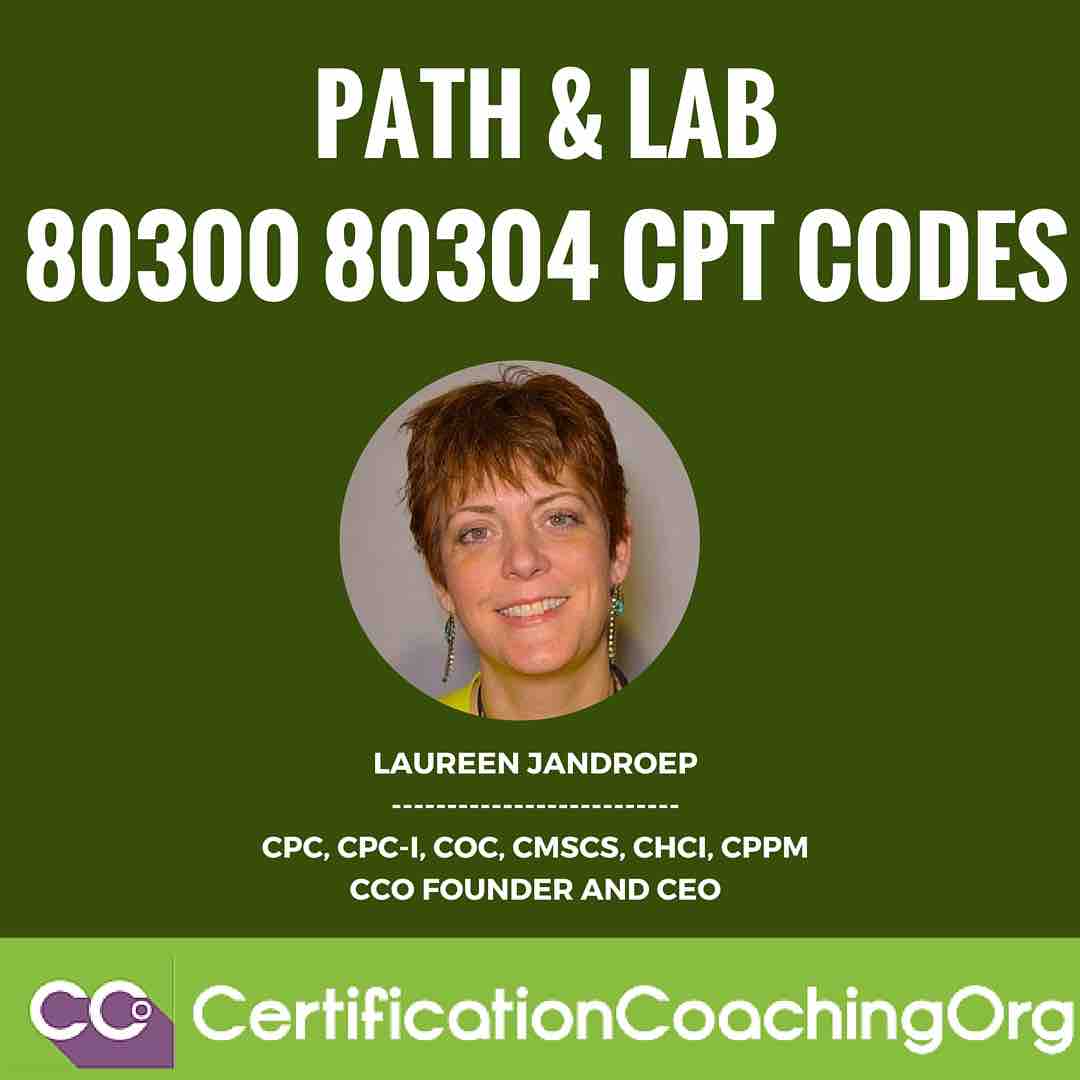