Now, let’s look at some examples, I’ve got three sets of example here. Without even looking and without having this memorized, this is how you’re going to break this up to see if you can pull out an answer before you’ve even read the question, because you don’t have a question here.

Right off what I’m seeing is, I know 250.00 is the main code for diabetes, and again, you don’t have to memorize codes but you probably will have diabetes memorized by the time you get through with a course or anything, because again, it’s like the default code in the most easily teachable, one was multiple guidelines. So, that’s telling me right now, that is probably diabetes; and this is, I don’t know what that is, if you didn’t know.

If this is diabetes, this has got to be a type of diabetes, right? And here we’ve got a type of diabetes and this I’m assuming is what goes with the diabetes. Then, this is the same thing as this one, only they’re switched. So, if I was going to think about this, I’m going to probably go ahead and throw this one out because this is on three of them and I know that 60 is a manifestation of diabetes and I’m going to have another code, so I could knock “B” off, I’m not going to use “B”. Now, if I don’t know what 357.2 is, then I’m probably going to not know that it’s a manifestation of this. I know this one is a manifestation. 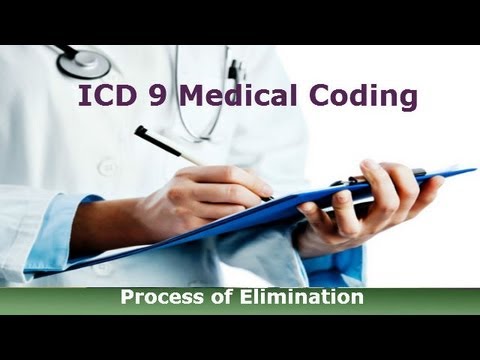 So, if I have to look up a code, I’m going to look up this code first. This is on 3, and these two are probably the most plausible, but I have to know what this is. If it’s a manifestation, if it’s not a manifestation of diabetes, then this is going to be the best code. What if this is hypertension or something? So, I’m going to go look up this code and then I’m going to see this – polyneuropathy in diabetes first. I’ve got to code the type of diabetes, so that tells me this answer is out. I know this answer is out, because I need two codes, most likely. And that means that I have a choice between this one and this one, so I’m going to go look at the question at that point and I’m going to say to myself, “What, does this person have diabetes, a type of diabetes? Probably, yup! They have neuropathy.” That means that this isn’t the proper choice. I’ve knocked out this choice and I’ve knocked out this choice, it’s going to be this one. So, boom! I was able to break it down real quick.

Now, mind you, this is if you know, we’ve already gone over this stuff here. So, let’s throw in more numbers because one of the things that the AAPC likes to do is have multiple codes at once to kind of… and it’s not that they want to confuse you, they just want to know, can you code to the highest specificity? So there’s the basics, that’s how we kind of broke it down, just give it the whole hairy eyeball. Now, let’s look here, the very first choice I get. Again, we don’t know what we’re coding yet, but I do know diabetes has to be coded to the fifth digit. That is a guideline. That is a guideline you need to know.

So, “A” is out automatically because they didn’t leave a fit, there’s no sub-classification so I don’t even have to look at “A” again, that’s out. This is telling me real quick, my other three choices are diabetic codes and two of them I know because I found out that (.60) is a neuropathy manifestation code, I do know that now. So, this person does not have neuropathy because that doesn’t have the 6 in it, it’s not a manifestation.

Now, I need to know is my person a type 1 or type 2 diabetic? Let’s go look at the question real quick, you scan it with your finger and it says whether it’s type 1 or type 2. Good! Got it! No, look at this, every one of them have 357.2. So I’m not even going to look at that. Every one of them has it, I don’t have to worry about it, but what’s the difference than the other? Every one of them has 585.9, okay? I probably won’t look at that yet, but I’m looking here, okay these two codes are the… okay, that’s going to make a determining factor but I guess knock this one out. I know that’s not an option. So, I’ve got 403.90 used twice and I’ve got 401.9, there may be something about that. Let’s go look that up.

So, “A” is out and “B” is out because if we’ve got this which happens to be CKD unspecified, just regular CKD, we have to use 403.90 and we already know that with this we can’t use this number because we have neuropathy. Now, we just need to see one, is it a type 1 or type 2 diabetic? If it’s a type 1 diabetic, then that’s probably the most likely. But you can, because this is a diabetic code with neuropathy; if the person had neuropathy that wasn’t diabetic neuropathy, that code right there would be 356.9 not 357.2. So chances are, this is the wrong answer as well. So, without really paying too much attention, that’s got to be the right answer, because I know that’s an error to use that code with that code. It’s an error to use that code with that code, and that’s an error right there. So, the answer has to be “D” if you’re using proper guidelines.

OK, let’s take it one step farther. Now, let’s throw some more codes in there. Based on what you already know. Let’s start here with this one. Now we know 585 is a chronic kidney disease. Now 9s are usually meaning it’s unspecified. 585.3, it means chronic kidney disease stage III. Look! That is hypertension. We know that because we had to look it up right here so we know that’s a hypertension code. 496, that’s one of those 3-digit codes. We just talked about that, and if you remember, it’s COPD. So now we know what that code is. And 438.11, we looked that up just a minute ago, late effects of CVA, the patient has aphasia and they’d had a stroke in their life. Good! We know that now.

733.00 we don’t know what that is. Let’s break down what we know about the codes. Because of what we answered here, we already know that if a person has chronic kidney disease that tells us that the hypertension code is going to change. It doesn’t have to say it’s connected, so because of that, we know this code and this code have to be used. So, there’s no other hypertension code. This just happens to be benign hypertension if you look that up.

So, “A” and “B” is automatically knocked out because we have eliminated “A” and “B” because if you have chronic kidney disease you cannot use those two hypertension codes, it’s a guideline. So, we have a choice between these two right here. Then, what I would do is I wouldn’t necessarily break it down anymore. I wouldn’t even look up this code, it just happens to be for osteoporosis; but it’s on every single one of them and it’s not pertinent. What I want to know now is we have hypertension with a patient and we have COPD. So, next, I’ll look at the case and see, what did my patient come in for? Because it’s the first listed diagnosis. Did they come in because they are coming in to be seen for their hypertension or are they coming in to be seen for their COPD? And that’s going to tell me which question is going to be the right one to go with. There you go, many examples, I love doing that. I could do those all day. 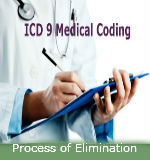