A: OK. What I did was I just put together some information, went and found a couple of good resources which are documented here as well. What’s the difference? What do you need to know for lesions that are important and what constitutes how you code them per lesion or doing multiple? A point to remember is, when reporting the removal of a benign lesion (and that’s another thing they’re going to ask you, benign or malignant?) they’re going to have two separate sections in the CPT manuals.

Do I need one code or two? You’re going to ask yourself that, when you’re getting ready. Is it the same type of lesion? If you have more than one, are they the same type? Then, treating; you’re going to be treating, removal, destroying. It actually doesn’t matter when you’re doing those. The coding and the billing is the same. But what is important is, is it 14 or less or 15 or more? That’s critical, that’s what they want to know when you’re going to do those codes.

Understanding Lesions in the 10000 Series – Diagnosis Code for Lesion 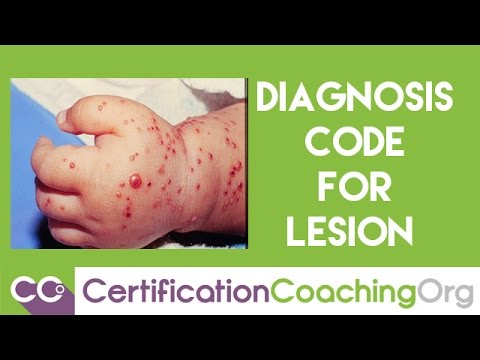 I gave an example of a couple that I had found, 17110, destruction and they’re telling you destruction includes (that’s what the e.g. stands for) laser surgery, electrosurgery, cryosurgery, chemosurgery, surgical curettement – it doesn’t matter how you’re removing it. That’s not what they care about. All of these are going to be the same – of a benign lesion other than skin tags or cutaneous vascular proliferative lesions. That’s off to a side, different kind. It says, up to 14 lesions.

The second code, 17111, same thing, destruction – anyway, they don’t care – of benign lesions other than (the same) skin tags or cutaneous vascular proliferative lesion. The only difference is 15 or more lesions.

Predominantly, what are we going to do? We’re probably using the 110 most of the time, but not always, because it depends on what type of lesions they’re removing. That’s the key. Everything else is, is it a benign or malignant and how many is involved?

As we scroll down and we look at the next section, what else do we need to know? Just on a side note, these are the things that Laureen has done with the bubble and highlighting in the CPC Blitz that really makes the stuff pop, so that when you’re scanning these codes that it just [snaps fingers], you don’t have to sit there and read everything it says. Highlighted right there, 14 or less, 15 or more, it’ll just jump out at you and you’ll be able to test faster.

What if they’re going to do a biopsy? How is that different? A biopsy of three different lesions or three different areas, and this was the scenario I found in this article. We have 11100 is a biopsy of skin, subcutaneous tissue and/or mucous membrane (including simple closure) – that’s all bundled in there – unless otherwise listed; single lesion. That’s the primary code, 11100, very common code.

The next code that you’re going to use is an add-on code. Notice we got the little plus sign. I made sure that was in there, 11101 – biopsy of the skin, all the same information, unless otherwise listed; each separate/additional lesion. That means you get one of those for each additional lesion. That’s where you get those x3 or some payers may want you to list it two timesYou remove three lesions, then you did the first code and then you write the other code twice or you do the first code and the other code x2. Very, very important. I have to say I’m a little all quivery and excited because this is actually a CPT slide and I’m doing it.I really steer clear of these, but I do like cutting and removing things. OK. What about shaves, curettage – and if you didn’t know the medical symbol for “with” is a “/c” nota “w” – with curative intent-verify if it is a BCC (basal cell carcinoma) then code for destruction of 3 basal cell carcinomas using a separate code for each.

Again, that’s where you go up to that: Am I doing one, am I doing two? These are shaves, it’s different. Size and location determines the codes with these types of codes. 17260 is a destruction of a malignant lesion. Pertinent, first thing you got to know, benign or malignant? Then they’re telling you, they don’t care how you’re cutting it off, that’s not pertinent to them; but the second thing you need to know…

Laureen:  Destroying it, you’re not cutting it.

Alicia:    I’m sorry, destroying it, getting rid of it, destroying it. But where is it located? Very pertinent. Now they’re saying trunk, arms, or legs – those are all included in one code – and the size of the lesion. This is where they’ll get out and they’ll take a picture of it with a little measuring tape thing, or they’re writing 0.5 cm or less. They will tell you the size.

17286, same thing; however, this is the extreme of this range. This is for face, ears, eyelids, nose, lips, mucous membranes, and its over 4.0 centimeters. So anything 4 and above for that body part that’s malignant is going to be a 17286.

Anything for that’s malignant from these body parts – the trunk, arms, or legs and is less than 0.5 is going to be the other code. So, those are the things that you need to know to determine if you’re coding for one or more lesions.

There was a really interesting thing that came in this article. It was actually the examples were given by a doctor as he was telling other physicians that “these are the things you need to know.” Multiple lesions in a single visit by shave or full thickness excision, you’re going to report each with a modifier-59. So I wanted to bring up the modifier-59, and say why are people picking the modifier-59, why is that pertinent?

The document must support, they have to show that these are two separate procedures, and alot of times they’ll tell them, “Just do two notes, keep them separate.” No doubt in anybody’s mind. They have to be two different sites. Well, OK, we’ve got one on the face and we’ve got one on the chest and the code tells us that’s two different sites. And they have to do, for an example, separate incisions, these wound excisions or separate lesions and these are, so a -59 would qualify.

I did see however and this was mentioned in the article that some payers don’t like modifier-59 and they want you to use a -76 which you can see it’s a repeat procedure or service by the same physician the same day. But you need to know your payers. If you’re in doubt, you need to keep that, you should always have open communication with any payers. You call that number, your contact person and then say, “Do you want me to use a -59 or a -76? This is what I’ve got. We’ve got a lesion on the face and a lesion on the chest.”

This is a great little article that this Dr. Fox did that you can go in and read what he said about this. There were several other things that he wrote about, but these are the main ones that were pertinent to these lesions and knowing how many and how to code that. Just an FYI, don’t forget that you need to learn how to research as a coder. Google is your friend. Laureen will tell you we’re Google gals, so go out and research and if it doesn’t give you the answer, then, definitely tap in to somebody and say, “This is what I think it is, am I on the right track?” You’ll find a lot of people that are more than welcome to give you their experience and help you along the way. Its good stuff and I did not put a gross picture of a lesion of any type on the slides.

Laureen:  That’s OK. Someone said, “Laureen looked freaked out by that wound care one.” Yeah, I don’t like those so much. But I did want to share a few nice comments in the chat, Marcy said, “I want to know everything Alicia knows someday.” I thought that was cute.

Alicia:   Well, we can put our heads together and hopefully it’ll come through on anastomosis. We’ll see you at the conference next year, OK.

Laureen:   Kendra said, “Yeah, Alicia can train anything and I would actually pay no lie. I’m going to take the CRC class but I want her to do a wound care class. I would do that too with her pics. LOL.”

Get More Details About Diagnosis Code for Lesion

AAPC – How to code for Lesions in General?