Late effect guidelines. “How does a coder determine and sequence late effect and principal diagnosis in ICD-9? This is probably a very basic question but as a rookie coding student, it’s confusing to me right now.” Well, it’s confusing to everybody so don’t feel bad. This is probably one of the first late effect guidelines that you get taught in most coding courses and it just baffles everybody. So let’s look at the little answer sheet we created for you.

Here we go. Go ahead and slide down a little bit to that answer part. As a general rule, don’t forget that when you do ICD coding, you code the main reason why they walked in the door. And then here are some examples. This person has a… how do you say that?

Alicia: Kyphosis, okay. I was going to say that but I didn’t want to screw it up, you know? Kyphosis due to polio. Now, 138 is your polio code but 737.41 is the late effect code. And I don’t even have to look at my code book to know that. I just know that polio is an early number code, late effect codes are higher numbers. So they came in with the kyphosis that comes first and the reason our cause goes as a supporting code. But to get to it, we have to use the main term late in the index. So when you see something that says late effect or due to, go to your first word. It’s late that you look up in your index. Otherwise, we’ll be coding an acute or current condition. 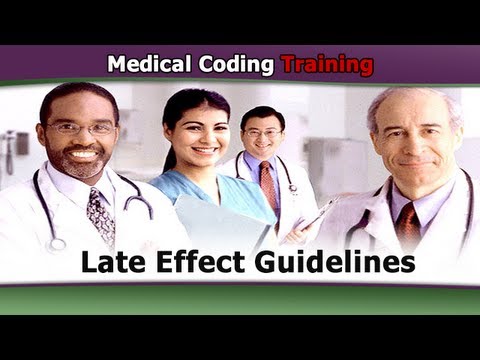 The dysphagia just means they’re having problems swallowing due to CVA which is a cerebrovascular accident. And that’s pretty common with people who had a stroke. So 438.82, I know that’s the dyphagia code and 787.20 is the late effect. 438 is due to the CVA. So 438.82, late effect to the cerebrovascular disease, dysphagia used… and it says in the guidelines. Use additional code to identify the type of dysphasia. If none, there’s a range to look at. So all your ICD-9 official guidelines for the coding section are… they’re actually listed in there.

Laureen: But on that one, if you don’t mind me jumping in, this is what’s known as a combo code. Sometimes with late effect codes, you can tell the story with one code. Other times, you need two. But this was a great example because the 438.2 actualy tells the whole story. It tells that it’s a late effect of a CVA and that their problem today is dysphagia. But we are told in the ICD tabular to also code an additional code that just qualifies the type of dysphagia. Because you’re like, “Why do I need this other code? It’s already saying dysphagia.” Well, there’s different types and that’s what this is. You’ll see that a lot with diabetes too like diabetic retinopathy. It’ll tell you, “Okay, but what type of diabetes? Is it insulin-dependent or whatever?” So they want you to do that second code. So this is an example of where the one code really told the late effect story but per ICD guidelines, we’re being told to code an additional one to round the story out.

Alicia: Yeah, I would like to tell the viewers, if you’re painting a picture, that’s the highlight. You’re painting in the highlights. So more example of late effects coding. You got aphasia due to previous CVA. Now dysphagia is difficulty in swallowing. Aphasia is inability or you know, the absence of swallowing. So you got 438.11, one code only is needed here because the description, like the other one, it tells you the whole story and there’s no guideline telling you that you need to use additional codes. You got late effect, this CVA disease or cerebrovascular disease and it’s aphasia.

Traumatic athritis due to old fracture of left ankle. Now here’s whare you’re going to use more than one code. You’ve got arthritis and it’s traumatic arthritis, 716.17. What caused the traumatic arthritis? 905.4 is the cause of the arthritis. Ataxia due to CVA, 438.84. It says it all. You don’t need any more coding to go with that. Now, mental retardation due to a viral encephalitis, 319 is mental retardation and 139.0 is the encephalitis, the viral encephalitis. You’re directed to use both of those codes. And each one of those examples that we gave you is examples of late effect coding where sometimes you have one code and sometimes you have two. That’s where it gets confusing for people. But if you just follow the guidelines, you can do it.

Here’s some little reminders for you. Again, this will be in the replay so you can refer back to this. Late effects usually needs two codes. That’s the common rule. But there are exceptions. The condition or nature of what is going on is coded first, then you will code the late effect second. There’s no time limit with late effects code. Something could have happened at birth and they’re having a late effect when they’re 16 or 30 or 50. The residual condition is the effect that is produced because of the illness or injury.

From Find A Code, this was an example, 737.41 and 319. That 319 is mental retardation. The first code, my kids learned because they call each other that. Not always will a second code be needed. If the documentation does not tell you why or what the residual condition is caused from then you only code the late effect. Okay, that confuses some people. If the manual instructs you to code in a different order then you follow the manual. So you think, “Well, the rules from… is this.” But if you see something that indicates code first then that code goes first. If you see an indication that says use in addition then that code goes second. If there’s no code available in ICD-9 manual then you only use one code. That happens,a lot, too. Watch for codes that are expanded to the 4th or 5th digit and include the late effect or residual into the description. They throw those in. That 5th digit tells you what the residual is sometimes. So you want to make sure, when you’re looking at the code, that you look at everything.

Now when you take the CPC exam, they’re going to give you the code but they’ll leave off the 5th digit in two of your choices. If you don’t read around and look at that 5th digit to see that, “Oh my, that’s the late effect.” Then you need to add that. That’s how they’ll know if you are paying attention to the guidelines. 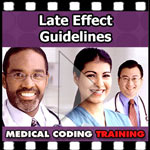