Laureen: We are trying to get some general questions to help people that are preparing for the CPC Exam, and there’re about six to ten questions that are very generic and have a little bit to do with reimbursement, and this is one of the topics. It’s covered very well in books like Carol Buck’s “Step-by-Step Medical Coding,” so hopefully that will help you here.

A: Obviously, one is worth more than the other, and I wasn’t planning on doing this, but let’s just do a quick look up in FindACode. That’s just one of our many favorite online encoders. Let me pull that over for you… I’m going to keep it just a little bit over the side, so I can see the code.

Laureen: A little slow. I’m off my game tonight guys, bear with me.

OK, so 46045 — let’s take a look at that one. This is incision and drainage of intramural, intramuscular, or submucosal abscess, transnasal, under anesthesia. That one is in involved, so let’s compare that I&D to 45300. Did I enter that first one right? This is a proctosig — 46045. Oh, transanal, not transnasal. I’m like, “Those are very related, are they?”

What they’re saying is that the first one, this I&D has more value — let me just double check it versus going by what the student said here. RVUs… So, I’m going to go by this one here. Mine is set for New Jersey, because that’s where I live, and I’ll go over that in a minute how well the math works out and the dollars work out, but it starts with the relative value of the code. What that’s talking about is CPT codes compared to each other.

It starts with the 99213 as the middle of the road code, and they want to see is this other code worth more, does it have more skill involved, more cost involved, more risks so malpractice involved, and they will adjust it accordingly. It’s a value that is compared to another code, which happens to be 99213.

In this case, they’re saying that this procedure has a relative value unit of 13.19, and that’s going to be used in mathematical formula. We’ll figure out the value of the procedure in the dollar amount. 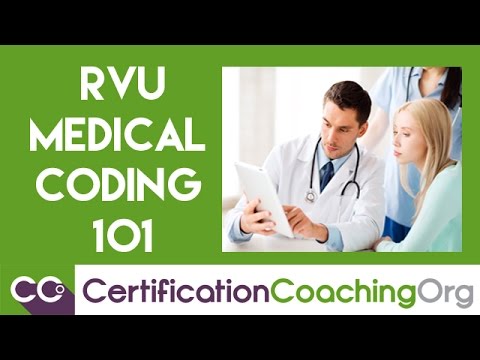 Now, let me go to 45300. And this one, for non-facility is only 3.83. So, you can see the value that this one isn’t worth as much money-wise, time-wise, skill-wise, whatever goes into the formula as the other code. Now, let’s break it down a little bit. Make me pull up my answer sheet here.

RVU — we talked about means Relative Value Unit. I’m going to go to this source document here. Again, I just did a Google search on Relative Value Unit, this came up. I also searched my own files and found in Carol Buck’s book, she had a nice explanation, which actually is very similar to this document here. So, I’m just going to use that since this one is publicly available, whereas Carol Buck, not everyone owns that book. This is acro.org/washington/rvu.pdf, so you can download that or save it on your computer.

There’re three pieces to a Relative Value Unit. The first piece is the physician work piece. The relative value of time – how much time does that it take to do that procedure; the skill required – to some, even the nurse or low-level practitioner could do versus a highly skilled brain surgeon; the training and the intensity to provide a given service. That is what they consider the physician work piece or component of the RVU, and you can read more of the details there.

The second piece is the practice expense of the RVU, and that component is talking about the cost for the equipment and the staff and the supplies, those sorts of things. You can kind of think of that as the supply piece or technical piece.

The third, which is real big in medicine today, is the malpractice piece. The more risky a procedure, the higher the malpractice insurance the physician is going to pay and it could be quite considerable so much so that they built it into this formula.

Now, that is what the RVU is made up — these three pieces. And there is a committee of doctors and other healthcare professionals that get-together and compare these three pieces to other similar procedures to give it a relative value, and that’s how the system has grown.

Along with that, we have the GPCI. That’s your Geographic Practice Cost Indices. In a rural area, in Alabama, let’s say compared to New York City, there’s going to be a big difference in cost, because the cost of living in the two different areas. That’s what this GPCI part of it is. It accounts for geographic differences in the cost of practices across the country. It could even be square footage of medical office space, that sort of thing.

Now, we need to put it all together. We need that conversion factor, the CF. This is going to take the relative value unit and convert it into a dollar amount. This is called a multiplier, because the conversion factor is multiplied against the RVU. This is updated annually by our government, and congress has the ability to override. This is a big area of consternation for the physicians, because it really affects their bottom line gross profit every year, is this little Conversion Factor.

Budget Neutrality is just another thing you could read about regarding this.

Facility versus Non Facility — we just saw that in the Find-A-Code. This designation is just identifying where the services are provided. The Facility pricing amount generally covers services to inpatients or in an outpatient hospital clinic setting.

Here’s the formula. The formulas that reflect the above components and results – this is obviously an older document, but you can still piece it together with this – using the physician fee schedule payment amount for each CPT Code.

So, you’re going to take the work RVU, and you’re going to multiply it times the work GPCI — that’s the geographic index. And you’re going to add it to the Non-Facility, the position. That was the PE up here. That was the second piece. The practice expense, that’s the second part of the formula and multiply that by the practice expense, GPCI, and then you’re going to add that to the malpractice RVU times the malpractice GPCI. Then, that gets multiplied by the conversion factor, and that’s how we come up with different dollar amounts for Alabama versus New Jersey versus New York. It all goes back to the Relative Value Unit.

It helps us as coders to understand them, especially when I’m teaching about the surgery section of CPT. Why is one code, which the description seems very similar, when you really get down to the nitty gritty, one might carry a lot more risks, especially when you get into the cardiovascular system and things like that versus it might be a short procedure, but it’s very risky. So, when you weigh out all these three different components and then the geographical areas that’s how we get such varying degrees of pricing.

Hopefully, that will help you understand RVUs. Here’s just a little summary from Carol Buck’s book. The three pieces are again: work, overhead or practice expense, and malpractice, and the sum of these for each component is going to equal the total RVU for a service. When you go to things like Find-A-Code, they don’t tell you how it breaks down, but this is just a way to compare one CPT code to another.

We talked about 99213 being the middle code that they picked and compared everything against it, and RVUs are converted to dollars by using a conversion factor. So, that’s understanding RVUs — Relative Value Units.