Q: “What is the difference between AIDS and HIV? How do I know when to use the AIDS code (B20) instead of the HIV code (Z21)? What role, if any, do ‘Opportunistic Infections’ play?”

A: This is actually a common question that I have seen not only in my students, but I’ve seen all over social media. The further we get into coding for risk adjustment, coding for inpatient environment, and just coding for good quality, the more we’re going to find, we as coders have to better understand clinical conditions and we can’t accept the providers to document explicitly in coder lingo. They don’t document in coder lingo, they document in physician verbiage. And, we need to quit expecting them to say clearly, “Oh, this patient has symptomatic HIV versus asymptomatic HIV” which is the difference in how the codes are worded.

VIDEO: When to Use HIV code and AIDS code? | Medical Coding Training 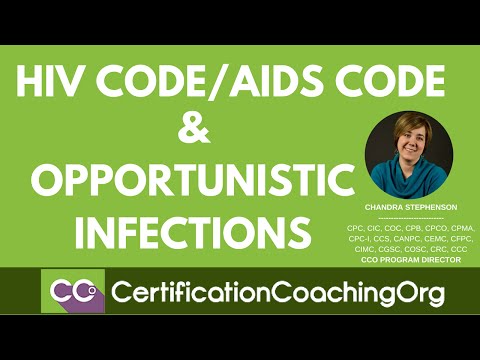 What does HIV stands for?

HIV stands for Human Immunodeficiency virus. It is just that, it is a virus; however it is a virus that once a patient contracts it they’re going to have it for the rest of their lives. It’s not currently one that we have a cure for anywhere in the world. This virus attacks the body’s immune system – specifically it attacks the CD4 or T cells, and those are the cells that fight off infections. If we’ve got the body attacking their own immune system, it’s going to progressively get worse, there’s going to be more of these HIV virus cells develop in the patient’s body and it’s going to attack more and more of the immune system and they’re going to get weaker and weaker from a defense perspective, and they’re going to get sick a lot easier.

Once they get to the point that they have a diminished T cell amount, they don’t have very many of those cells left to try and fight off infection, or they’ve developed what we call an opportunistic infection; then, they have progressed from HIV (the virus that causes AIDS) to AIDS.

What does AIDS stands for?

When we talk about AIDS, AIDS stands for Acquired Immunodeficiency Syndrome. This is a term that many of us have heard before and are familiar with, it occurs, like I said when that HIV virus has replicated to the point that it has weakened that person’s immune system substantially.

Requirements for a person being diagnosed with AIDS:

1. They either have to have a T cell count or that CD4 count below 200 cells per cubic millimeter of blood (200 cells/mm3); so that’s very, very small amount. 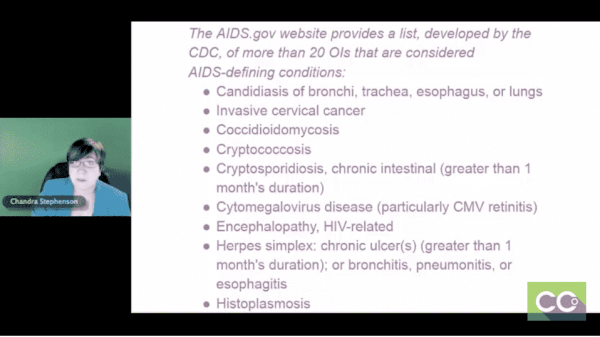 The Federal government actually has an HIV website out there, it’s called AIDS.gov. If you go to that AIDS website you’re going to find the same definitions that I have given you, the same clinical parameters on when a patient has reached the diagnostic criteria for AIDS, and you also can find if on that site you search in their little search box for opportunistic infection, that there are a list of more than 20 conditions that are considered opportunistic infections. An opportunistic infections is one of those that’s going to take advantage of that patient’s weakened immune system and basically take them to death’s door. It’s going to make them very, very, very, very sick and it could potentially kill them.

By definition, if a patient is HIV positive, then diagnosed with any one of these conditions on this list, they’re considered to have an AIDS’s defining condition and be progressed to the point of having AIDS. The HIV positive, the Z21, asymptomatic code, should not be used.

Now, there are a lot of conditions on here that are really common, but they are pretty much common to HIV patients. For example, Kaposi’s sarcoma or cryptococcosis, histoplasmosis. Those are things that we see and when we see them, most of the time, more often than not, they’re in an HIV patient. Some of them are conditions that we see in everybody. Things like herpes simplex, but then they put additional parameters on there to say, “Yeah, herpes simplex, but it has to be chronic ulcers lasting more than a month’s duration, or it has to be herpes simplex into bronchitis, pneumonitis, esophagitis.” It’s got to have progressed beyond just a basic case of herpes; so there’s all this clinical information here.

The reason I point this out, this is a good list to put in your ICD-10 manual somewhere, because if the physician’s documentation simply says, “Known HIV” and then list one of these conditions, like lymphoma, that patient automatically has AIDS and the Z21, asymptomatic code, should not be used. So, you may not have the provider documenting the phrase “AIDS” even though that code is substantiated and backed up by the documentation.

What is the difference between a B20 code and Z21 code? 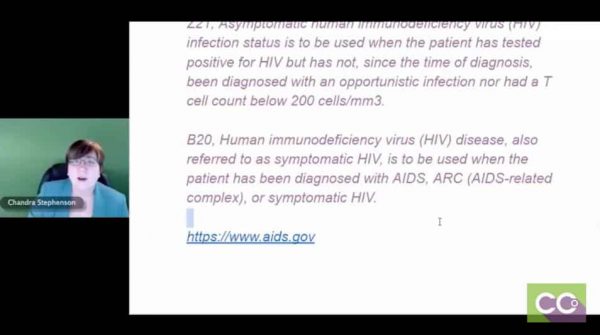 Some of the common phrases that you’ll see documented that substantiate B20, that known HIV disease symptomatic, you could see the provider document the phrase AIDS (Acquired Immunodeficiency Syndrome). ARC is another one – not as many people are familiar with ARC. ARC stands for AIDS-related complex. That’s actually the diagnosis many providers use when a patient first starts showing signs of one of those opportunistic infections. By definition, as soon as they’re showing signs of an opportunistic infection, they’ve met the requirement for the symptomatic code and they get thrown there.

Or you may see a provider document symptomatic HIV. Conversely, you may see them write “Known HIV” or “HIV positive” and then document one of those opportunistic infections. Any of those are acceptable and substantiate using that code B20.

At the very bottom, I gave you the link to the AIDS.gov website. It is really, really helpful if you’re trying to understand AIDS and HIV and ARC and where everything fits in and how you’re supposed to use these codes. I definitely encourage you to take a look at that. If you’re one of our students, our Replay Club members, or have looked up in the annotations that we have in the ICD-10 manual, you’ll find that we do include that list of opportunistic infections in the notes that we suggest you make.

What we do is, next to the code B20, when we say “See list of OIs” and then we put those OIs on a blank area in the book, wherever you have room to write that list out, so that you always have that even if you don’t have access to the internet.

Just to recap, the difference between AIDS and HIV, HIV is the virus that leads to AIDS. They are coded separately, if the patient just has the virus and is not yet declined to the point that they have a low CD4 or T cell count below 200, they just have HIV, they just have the virus. If the virus replicates to the point they have that low T cell count or they developed an opportunistic infection, they have full-
blown AIDS or symptomatic HIV, which is coded using B20 and that’s where those opportunistic infections come in. That supports that diagnosis of symptomatic HIV. 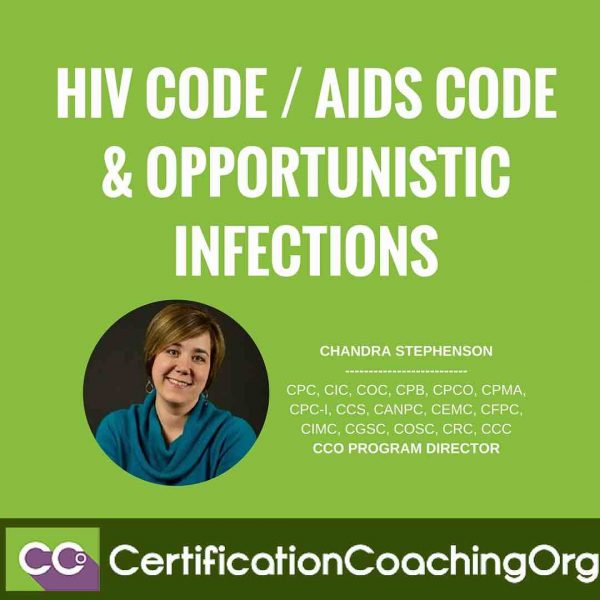