Q: “There is really not many resources out there for coders in Wound care and it is a very busy department with lots of hurdles to go through with payment of these services. We have Skin substitutes, HBO treatment, Debridement. Even just coding the Diabetic Ulcers themselves, with ICD-10 codes that do not reflect the Wagner Grade system my providers use, is a nightmare!”

And that is true! So, as we look at this one, keep in mind that we have a lot of requests out there for more information on wound care and after talking to Chandra we have decided that we should divide it up into segments, so we will do this topic of wound care more than once but we will do it in categories; so tonight, I’m going to talk about skin substitutes. 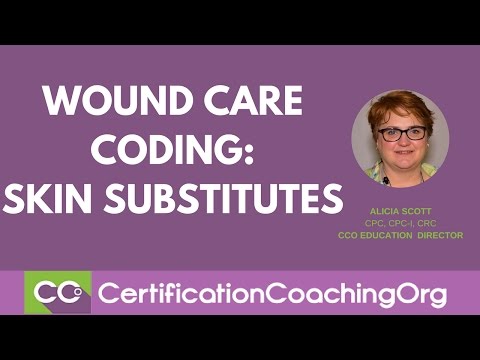 How to Code the Skin substitutes?

It is actually used for covering wounds which could be ulcers, but most of the time, people think about burns, and so, what I did was I focused on the different types of skin substitutes, first with burns, and then I did a little bit of information on the coding that goes along with skin substitute. It’s where we would start.

We can go in more depth later as we add more content, but again, I could talk all night on this, there is so much information. Know that in the definition that there are two types, are terms you need to know, is the full thickness skin graft and autologous. That’s the two main types because they’re convenient. There are many types of wounds that might need skin substitutes but the things that you need to consider for, first saying burns is… and this is all stuff that is going to be in the documentation. That’s going to tell you that you are going to be coding for it and using skin substitutes.

But this is the stuff that they need to know:

1. They need to know the depth.

2. They need to know the availability of a donor site. The problems that comes with that is that if you have a person that has burns over a large part of their body, where are they going to get a donor amount of skin to lay there? And then, you have to worry about the wound that you are creating when you take skin from the other area of the body (donor site).

3. Infection – always a problem with burns, but especially when you are trying to put something over a burn or a wound and a skin substitute would be doing that, would be covering it up. Where are the burns? Can you do a skin substitute there?

4. Contracture – if you have ever seen anybody that has scar tissue from a burn or a wound you’re in an ulcer you’re going to see a lot of scar tissue which can contract and literally make you lose function of fingers and different parts of the body.

5. Aesthetic outcome – it is going to look worse than letting it heal from the inside out? That is something to think of. The cost – is it a possibility, is this a relative cost? Time consumption and how long is it going to take? But a big one, what if there is nobody in your area, or someone that knows how to work with skin substitutes? If you don’t have somebody experienced then you’re probably not going to have a good. So, these are the points to consider when using it, not only for burns but other types of wounds.

What a skin substitute will provide?

Also, what is the skin substitute actually going to do for the patient? This list, I’m not going to go through all of it, but just go over a few of them.

That flexibility in thickness is very important, also, durable with long-term wound stability. That is something that some people don’t think about. This is all stuff that will be documented when you’re talking about skin substitutes and if it’s going to be effective or not.

Again, cost is always something to consider and this one here is a big one: can it be conformed to irregular wound surface areas? Especially like on the face and stuff, think of the scar tissue but there is also different colors that would be involved, and so you want to think about that. And, easy to be secured and applied. Is it going to be easy to do or is it an area that’s going to be difficult? These are all things to consider when they’re dealing with skin substitutes.

You’re going to need to know these when you get into wound care before you even get into the codes that are involved, you need to bring up your knowledge base. First, we have

Class I. That’s usually temporary, it’s just a single layer, and that is something that is used to cover it up so we don’t get infection and letting the wound start to heal from the inside out. We got a single layer and bi-layered type and usually it can be engineered material.

Class II is a single layer of durable skin substitutes. They have a lot of companies that go with this and where I got the resources from, they were great about listing these. You need to know as a coder if you’re working in the wound care, these brands, because a lot of times when you’re dealing with, like, HCPCS codes and stuff that needs to be involved.

You’ve got epidermal substitutes, dermal; you’ve got lots of bovine and human as well. Let’s go ahead and move down from the single layer, the Class II, and let’s look at the

Class III: Composite skin substitutes. This is where we’re getting into a skin graft. This is also where those terms allograft and xenograft come in. if you don’t know autograft, it means it’s from your own body. Think of you sign your autograft; auto means it’s coming from you.

Then, we got tissue engineered skin. These are different names of ones that are common, but again it’s tissue engineered. We’re developing the tissue ourselves and then literally growing it and putting it on the wound. Again, these are terms that you’re going to want to know.

What do we need to know about them? These are usually transient physiologic wound closure – if you’ve got a big wound on your face, you need that covered up – and its protection. You’ve got a physical barrier so that you don’t get the bacteria in there, and for these wounds to heal properly, they have to have a moist environment, so that’s important and these temporary skins can do this.

Uses for temporary skin: If you’ve got just a dressing for the donor site, clean superficial wounds, to provide temporary – just the look, not have something so yucky to look at. That’s not a good way to say it, but if you think about the different… especially like ulcers and burns. I thought this one was interesting: sandwich graft technique over the widely meshed autografts.

Now, real quickly let’s look at some of the coding that would be involved with skin substitutes and how to look them up. The first thing you would look up is surgery, surgical procedure on the Integumentary System, surgical repair (closure) – you didn’t think about that because we’re actually closing the wound by putting something temporary over it – and then procedures on the Integumentary System. Skin replacement surgery and then surgical preparation – this is how you’re looking it up in the Index – and then skin substitute grafts.

I went ahead and took from Find-A- Code these codes that put in for the skin substitute and this is what it brought up. It starts at 15271 and notice that this is going to be a skin substitute, but it’s going to be on the trunk, arms, and legs. So when you bubble and highlight, that’s part that you’re going to highlight, is the trunk, arms, legs, and 100 sq cm; first 25 sq cm or less wound surface area. Those are everything that you need to know as a coder, those things will be spelled out in the documentation for you.

As the codes change from 71 to 72 and so on, the size changes; but you’ll notice that on 71 through 74 we’re still doing trunk, arms, and legs. But the 100 sq cm stays the same, but were 25 sq cm or less, and then it changes again as we see the last part or 1% of the body area of infants and children. That’s all that little bitty tiny documentation that can mess you up when you’re taking your CPC exam or another certification exam, and why bubble and highlighting is so important.

Then, we go down to look at 15275, we’re doing no longer the trunk and the extremities but we’re doing face, scalp, eyelids, mouth, and look it’s still going on. So, think of the neck up but also other areas that have smaller circumference, so we got hands, feet, digits, genitalia. These aren’t like the trunk and the arms, it would be large amounts, but we go from the size, the 100 sq cm, the first 25 sq cm or less of the surface area and then as that is listed and changes; 77 mentions the infant and children.

That’s just a quick overview on the coding. There’s so much information about skin substitutes that we’ll do more content in the future and build on this, but know that this is a good start.

After skin substitutes, we’ll be looking at one of the other parts: the HBO treatment, the debridement, diabetic ulcers themselves – we could talk forever on that. Again, in a future webinar we’ll take another part of the wound care and we’ll build on that knowledge base for you. If you’re in the Replay Club, you’ll have it all. 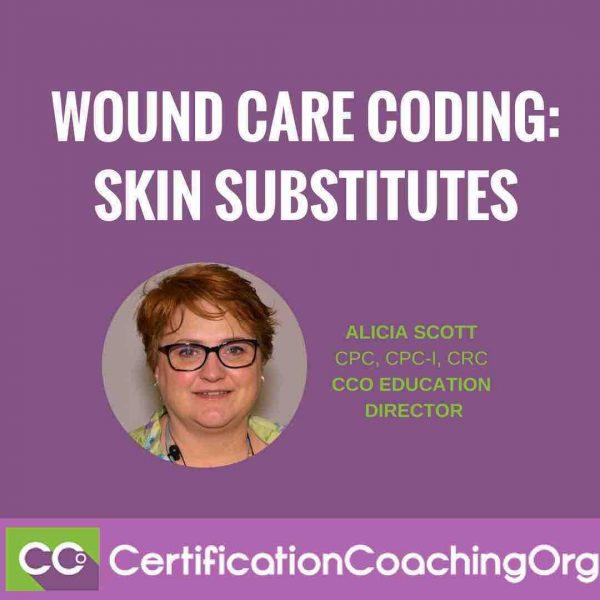