Alright, first question: This is AAPC or AHIMA certification. We have had this one before, actually we got this question two or three times this week alone so I thought maybe we had better revisit it again. So here is one of the sample questions:

“Hi, I have an associate’s degree for coding and billing but haven’t worked for the past two years and am looking to get certified. My question is this: What is the best certification to get, which one is preferred by companies, CPC or CTA?”

Let me take you to the answer: 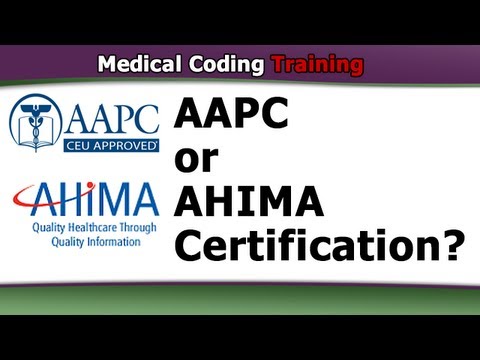 Basically, what I jotted down here is hospitals tend to prefer the AHIMA credentials, the CPS, the RHIT and if you don’t know what those are you can go to AHIMA.org I think it is and check them out but the junior coding credential is the CPA which is what this questioner was asking about. Physician’s offices, tend to prefer the AAPC credential but mainly I find physician’s offices – they just want to know that you are certified. So if you have a CPC or the CPST which is the Credential compared to AAPC, they are normally satisfied with that. The other thing you want to consider as far as which one is preferred is look in your local classified. What are the want ads asking for? Do you see more of one than the other? Location: If you are in a big city like Philadelphia, New York City, there are a lot of hospitals, so there might be more jobs in the hospital setting versus in a rural area like me, there isn’t, there are only two main hospitals. So you are probably going to have a better chance landing job as a new coder in a physician’s office. And of course, what do you like? Can you picture yourself working in a large hospital type environment like a little more kinda rank and file almost like military grades and things like that. There may be a smaller intimate physician office setting. You can probably tell by my answer which I prefer so I do have to preface this with – I am bias, I am a physician out-patient girl, I have worked in hospitals as an occupational therapist but not doing coding. it’s a whole different world and my comfort zone is a physician-based world. So take my advice with that in mind that I am a little bit bias and I do tend to steer prospective students toward the physician-based world because I feel it is easier to break into than in the hospital.

I also had on the slide AHIMA vs. AAPC comparison grid that I did when I covered this question before, let me see if I can enlarge this a little bit….So, what I have here is different variables and then the AAPC column and the AHIMA column. The first variable is the physician based exam. What is the credential for their physician based exam? So, for the AAPC it is the CPC, certified professional coder exam. For AHIMA, it is certified coding specialist physician based credential. If you are looking for outpatient hospital based exams, for the AAPC, that is going to be your CPCH and for AHIMA, the outpatient aspect is part of their CCS exam. For inpatient hospital base, the AAPC doesn’t have a credential for inpatient. They leave that to the AHIMA folk and this is the lead credential AHIMA for coding is CCS and this is your inpatient and outpatient it’s a comprehensive exam, very difficult in my opinion compared to the others. I think it’s the most difficult. I did want to emphasize that the CPCH – because “H” means hospital, throws a lot of people off, it only means outpatient hospital so be aware of that because I took my CPC first and then I took my CCSP And then I took a CPCH and I really put off taking the CPCH, I was like, “awww I have to do all that inpatient type coding and studying for it then when I took the exam I was like, “wow! This is a lot like the CPC exam”. So the difference between the two, you still need to know all the CPT coding, surgery coding and all of that, are covered in both exams but you do have outpatient reimbursement stuff being asked of you in the CPCH.

Entry level credentials, the AAPC has the CPCA for apprentice and AHIMA has the CCA.

Cost of the exam: AAPC charges $399 and you must be a member. AHIMA charges $299 for members, $399 for non-members so pretty much they are the same. What is different is that the number of exam attempts per fee. AAPC lets you have two whereas AHIMA you only get one shot. So if you don’t pass the first time, you have to pay another $399 to take it again. AAPC gives you two tries which is a good thing because a lot of people need you two tries and if that is your case, its ok.

Length: AAPC exam is 5 hours and 40 minutes and AHIMA is 4 hours.

Books allowed: Approved coding manuals only for the AAPC, AHIMA allows you to add a medical dictionary as well.. So hopefully that will help you as a little comparison to AAPC vs. AHIMA credentials. 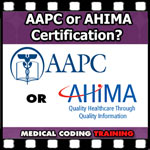 54 thoughts on “AAPC or AHIMA Certification?”