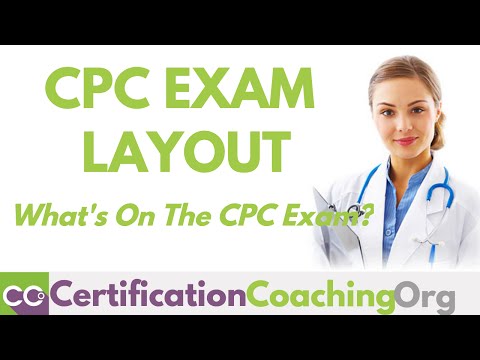 Speaker: Okay, for the “H” everything you’re going to learn here will help you with that exam; however, you need to supplement this. I normally recommend getting the AAPC Study Guide for the reimbursement knowledge that you need on that CPC board exam. But for the CPC or the CCS-P, the physician-based board exams, you don’t need to really know a lot of reimbursement stuff. It’s about medical coding guidelines that they’re testing you on. Okay?

I’m going to talk a little bit about the CPC exam, it’s a 100 questions. It is 4 hours now. Over the years, I have been doing this since 1999, they’ve changed how much time you’ve had, they’ve changed where you had to get a 70% in three sections; but as of today, you need to get a 70% overall for all 100 questions. They all count the same. Those long OP reports with four and five codes to look up are worth as much as a quickie medical terminology question. So, I’m going to teach you some techniques, so keep that in mind.

I’m a very visual person, so a lot of my teaching methods come from how I taught me. This is basically what I did to cram; unfortunately, I’m a procrastinator for studying the board exam. What I found is a lot of coders really like that; the visual method resonates with them. So, picture in your mind a scantron form, everyone has done those bubble forms, right? I retook the exam a couple of years ago and it’s literally five columns of 30 questions each, which is kind of cool because it’s a 4-hour exam. Now, you can start to think of some strategies, timing, because that’s really what a lot of this about, time management.

So, 70% is what you need to pass. That means that you can get 30 wrong and still pass, that’s a lot. Honestly, give yourself a break because what we do, a lot of coders are very type A, and we wanted to really get that first one done and move on to the next one and it makes us feel better. You don’t want to do that. It’s about time management; it’s about quick, quick, quick in getting those answers quickly. If it’s one that’s really stumping you, just say to yourself “That’s going to be one of my 30,” let it go. “I have a 25% chance that I even got it right. It’s okay.”

As everyone probably knows, you got two tries for the same fee. I will let you know not as a discouragement, but just as a heads up that the 2012 exam has been especially challenging. I have been doing this since 1999. I know how people do. They’ll watch my videos, they’ll email me and tell me; and for whatever reason in 2012, if anyone didn’t pass, they got a 68. Not a 64. All except for maybe one, 68. I don’t know what is about that, but I do know that the exam is harder and I’m going to go over that which I haven’t done in years past: How to handle multiple code answers.

If you picture an exam question and then A, B, C, D next to “A” they’ve got four codes to look up. Next to “B” four codes, next to “C” four codes. It’s not like just one code in each answer, it’s multiple codes. You can imagine how that’s going to slow you down, okay? I think they have a lot more of that than they’ve had in years past based on feedback I’m getting from students who have already taken it. Of course, I’m using 2013. I don’t know what that exam is going to be like.

If any of you are planning on taking the exam in 2013, then maybe they’ve made it a little easier. We don’t know. They don’t share that information on how they make the test or whatever. I’m just letting you know how it’s been in 2012. That, if you don’t pass the first time, you are not in the minority. It’s happening to a lot of people. So, if you have to take it twice, that’s okay. That’s what it’s for. 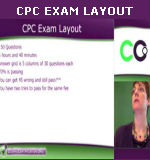