Q: Can a Z code be a Primary / Admitting Dx? “Can I use a Z code as a primary/first listed diagnosis? I am struggling with coding aftercare especially.”

A: The answer is yes. You can use a Z code for a first listed diagnosis. The thing to understand and this second question that came in was that they were getting confused going from ICD-9 to ICD-10 and that not all the codes translate and the thing to remember is that ICD-9 doesn’t translate into ICD-10 perfectly. Not always. But one code that is fun to remember is the Z00.00 code which I like to fondly refer to as the ZOO code and that is for an encounter for general adult medical examination without abnormal findings. Or you can use this for an encounter for adult health check-up, it’s not otherwise specified.

But remember, when you have this code, the Z00 code, that it is for no abnormal findings when they come in. That’s the key there. Then, there is an additional code that isn’t Z00 there after the point, you’re going to have other characters for abnormal findings. That wasn’t the intent when they came in, this particular encounter code, but they do find something.

If you want to look at these in your manuals, in your ICD-10 manuals, if any of you have them with you, I’m sure you all carry them around with you wherever you go. The guidelines for this particular code is section 1; C.21.c13. Looking at 13, it says routine and administrative examinations. This is a lot of information and so I actually made it in a smaller font because we really don’t have to go over all of it; you can go over it in your own leisure here now that you know where it’s at.

What it is expressing is that it’s for a general check-up and this could be for an administrative purpose or maybe even for pre-employment physical. When you go in for a pre-employment physical, they don’t expect to find that you have diabetes or hypertension, so it would be without any abnormal findings. Or if they go in and they say, “Hey, you’ve got hypertension,” then that would be with abnormal findings. But, this is a code that you are going to use in such cases where a diagnosis is found during a routine exam, what you should do is use the diagnosis or if the condition is discovered, it should be coded in addition to this Z code. That’s the basis of how this particular Z code works, and it’s a common first-listed diagnosis code.

VIDEO: Coding Aftercare — Can a Z code be a Primary / Admitting Dx? 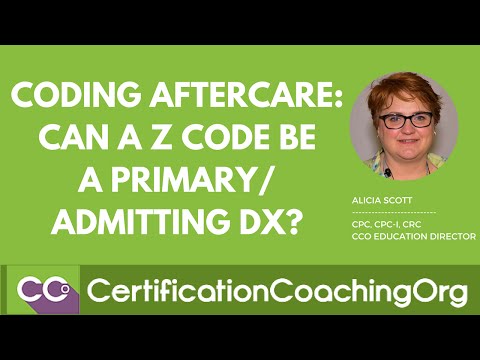 You come in for your pre-employment exam and they say, “Hey, you’ve got hypertension,” then you will have with abnormal findings and hypertension. That is what could happen with this common Z code.

As we move along, what other Z codes can be used? There’s actually quite a few. Don’t forget, this is where the guidelines are but let’s look at this particular guideline that we looked at before, but look at 16. As you’re looking at your guidelines, it keeps indenting at an outline; 16 state a Z code that may only be principal/first-listed diagnosis. What are the guidelines there? What I did was I actually went in to Find-A-Code and I took all of the Z codes down to the smallest level before the decimal and gave you a list of what the possible options are of codes that could be principal or first listed. I’m assuming most encoders do this for you, but Find-A-Code does.

I’m not going to read all of those because actually there’s more than a dozen, but the main ones, the one that always pops into my head is the Z00 codes. Then, as you look at some of these, the Z01 is for a special examination without complaint, suspected or reported diagnosis; administrative examination is Z02. As we scroll down let’s jump and look at some of these others here.

This would make sense; look we’ve got Z31.84 is encounter for fertility preservation procedure. Below that, we’ve got supervision of normal pregnancy. Because when you’re in a pregnancy, you start out coming in every month and then you come in every two weeks and then it becomes weekly. And what code is the principal diagnosis for that? It’s a Z34. Your encounter is supervision of this normal pregnancy. Then, it goes on for postpartum care as well.

Let’s see, they’ve got plastic and reconstructive surgery. These are things that are going to take multiple visits; however, you’re coming in mainly for the same thing unless you have a complication that is involved.

One of the ones that I forget that exist is Z52 – donors of organs and tissues. This always made me think of a friend of mine, her brother had had multiple kidney transplants and siblings were not always a good match. Now, as we’ve advanced with that, my friend, his sister is going to be a match, so she’s prepping to be a donor for him. Ultimately, this Z52 would fall into that.

Then we get down to the last one, Z99.12 – encounter for respirator [ventilator] dependence during power failure. So, they’ve got everything. Anything that you can think of could possibly be in there. Again, I found this off of Find-A-Code when I looked up the Z codes and you’re able to go back and look at a list of them in order.

It was mentioned, the question about aftercare. I want to highlight that quickly. If you’ve got the category Z00 – Z99 and these codes, why do we have them? There are for occasions when circumstances other than a disease, injury, or external cause classifiable to categories A00-Y89 (huge range) are recorded as diagnoses or problems. This is going to be stated at least in Find-A-Code; on every Z code this is going to be a statement.

Two main ways this arises when you’re looking at the Z codes, and the first one it’s when a person may or may not be sick when they come in; thus, when you have a person that’s coming in because they’re pregnant, they’re getting their routine care, they’re not sick and yet it’s routine care for this pregnancy. See how that works? Then, it goes on to explain more about the donor tissue and some other things like prophylactic vaccinations, immunizations; if you bring your child in to be vaccinated. Or, maybe you’re going in to have a flu shot and now they have a pneumonia shot. That would fall under that category.

influences the person’s health but is not in itself currently an illness or injury. Again, that’s the pregnancy that is in there. This is straight out of the guidelines and that’s all listed in Find-A-Code. I believe that’s about it. Again, when you get your transcript, those links on Find-A-Code there, Find-A-Code has a free version which you should be able to pull those up.

But Z codes, if you’re coming in for follow up, it mostly depends on why you’re doing the follow up. If there is a diagnosis, if they’ve fractured their hip and they’re coming in for follow up of that in a skilled facility, it’s follow-up for the fracture care, then you’re looking at a diagnosis code other than a Z code. Don’t forget that you’ve got the Z codes available to you, they can be first listed if they fall in that list; however, if there is a diagnosis that is the reason they’re being treated, of course that’s going to go as the first listed diagnosis. Z codes are a lot of fun, guys. 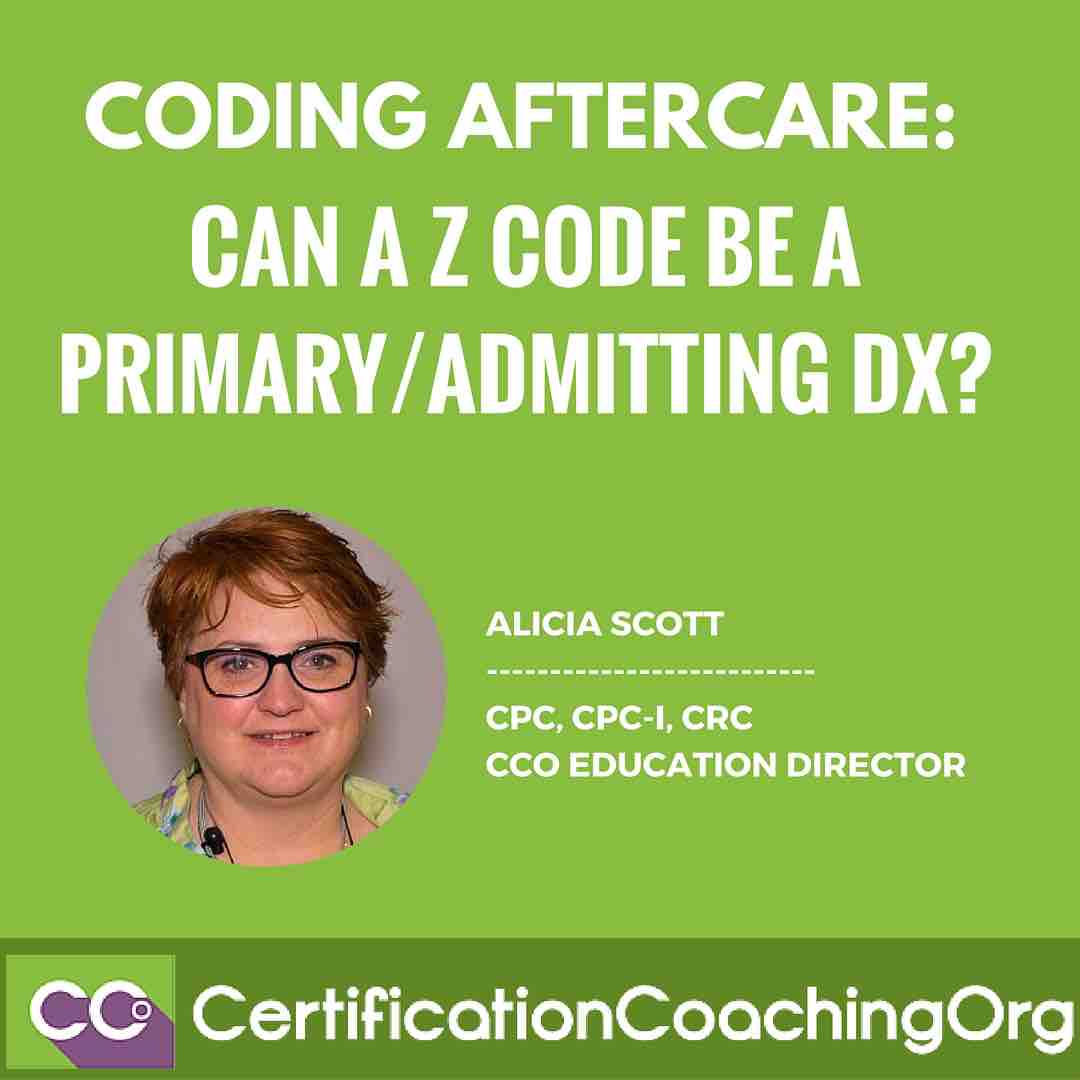