Q: HCPCS after ICD-10-CM/PCS. This question came in and they wanted to know “Would the HCPCS be terminated after ICD-10 implementation comes into effect next year? I would highly appreciate some guidance. Thanks! – Kevin” 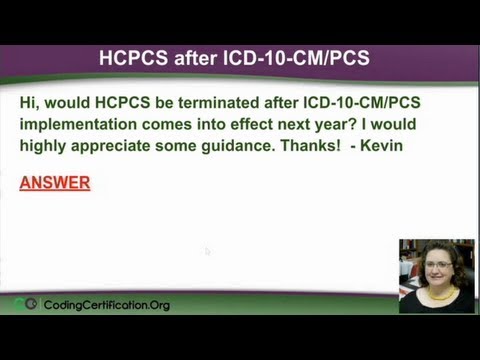 Will ICD-10 replace CPT or HCPCS procedure coding? The answer is no. You’ll know that right off. No, it’s not going to replace it. The CPT (Current Procedure Terminology) and HCPCS (Healthcare Common Procedure Coding System) will continue to be used in the outpatient setting and for practitioner claim forms. Like ICD-9 procedure codes, ICD-10-PCS codes are for hospital inpatient procedures only.

So, if you’re working in a doctor’s office, you’re going to be using ICD-10-CM. The CM is for your doctor’s office and clinical modification. The PCS is inpatient procedures only. Really briefly let’s go over again, what is ICD-10? I figured most of you probably know what ICD-10 is, but if some of you don’t, this is the big scary thing that everybody talks about and it’s not scary at all. Actually, CCO is very excited about it; it’s going to make coding easier in the long run.

But, with ICD-10, again, the US is kind of a straggler with that. ICD-10 is virtually unlimited for coding, whereas ICD-9 we just run out of codes and you’ve got a lot of unspecified codes which you don’t have any numbers to assign to them, they’re all used up because you can only use five digits. So if you can only use five digits, you’re going to eventually have to stop.

So, here are some questions that have come up often with ICD-10. Now, we know HCPCS is not going away.

Q: Can I opt out of ICD-10 by submitting paper claims instead? The answer is no, you can’t, because you have to use ICD-10. It doesn’t matter if you use paper claims or not. That’s not what the problem was; the problem is you ran out of numbers to do the codes, so coding is changing. The Federal mandate applies to all claims, whether submitted electronically or on paper. There is no exception for paper claims. In fact, and I don’t know this for sure, but eventually you’re going to get to where they don’t take paper claims. I assume that will eventually happen, I don’t know when, but there are rules right now stating that by a certain date everybody has to be electronic and they’re giving great big bonuses to doctors who are already set up in that. If you’re not, by a certain date, which I can’t remember off the top of my head, you will be fined; and so, they’re just going to make you do it.

Q: Who has to transition to ICD-10? The answer to that is everyone, but all covered entities under the Health Insurance Portability and Accountability Act (HIPAA) of 1996 must implement the new code sets by October 2014.

Now, previously was October 1, 2013 and the powers that they came in, and said, “We need more time, this is expensive to do this transition. We’re not ready. We’re not going to make that deadline. Please give us more time.” Or give us more time to talk you out of the switch which was going to happen. So they said, “OK. We’ll move it to 2014 but that’s it. It’s official. That’s it.”

Covered entities required to use the new code sets include health plans, payers, providers, clearinghouses, health care information system vendors, billing agent and other services – so just about anybody that’s associated with the medical field and diagnosis are going to have use ICD-10.

This is just a medical office saying, “OK. We got to start configuring everything to ICD-10.” So when somebody comes in with hypertension which is 401.9, it’s now I-10 and we’re just going to put I-10 in there. All these other people have to know what I-10 stands for or they can’t do their job.

Q: What happens if I don’t switch to ICD-10? This is a pretty funny thing because if you don’t, you’re going to definitely going to have some problems.
“For HIPAA-covered entities transition to ICD-10 is not an option.” So, more or less states that if you’re under HIPAA which everybody in the medical field is under HIPAA, you don’t have a choice; you either change or you don’t get paid.

“Without ICD-10, providers will experience delayed payments or even non-payment; Increased rejections, denied or pending claims; reduced cash flows and ultimately lost revenues. Payments to providers cannot be made without the proper ICD-10 coding.”

So in other words, you cannot use ICD-10 if you want to take cash, but if you want to get paid by any of the providers, you have to use ICD-10. And I think a lot of people forget coding was not originally set out as a way for providers to get paid, its statistical purposes, that’s why it was originated. It was to track diseases in the process of disease. So, they wanted to be able to tell how many people died of pneumonia in Florida in a given year and they can do that. They can even not get down to the county or the town because of statistical data that’s received from ICD-10. That’s how they chose what medications are put into flu shots, actually. I believe they can only put so many anti-flu strains, they can pick so many. I can’t remember, it’s like 3 or 5.

So which ones do they pick? They pick the ones that are going to make the people the safest and the ones they expect to be in a certain area, then you’ll be immune for that for the next year. Then they’ll pick 3 or 5 or how many for the next year. Eventually, you’re supposed to be immune to anything until it’s in a new strain. But they do that via statistics. Somebody just says, “Oh I think it’s going to be the bird flu this time or something.”

“Claims that do not use ICD-10 diagnosis and inpatient procedure codes cannot be processed” – thus you won’t get paid. “It is important to note, however, that claims for services and inpatient procedures provided before the compliance date must use ICD-9 codes.” There are a couple exceptions and one of those is like Workman’s Comp. I think I got that on another slide, we’ll go over that in just a second.

So, to answer the question: Is HCPCS going to be around still? Yes, it is. It’s not going away. Don’t worry you’re still going to use your HCPCS. 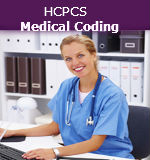